I know that this has little to do with the SIM but it seems to me a rather curious thing that I want to share.
Granted that I am using FlighAware to check if the AI ​​traffic that I configured in my SIM it works correctly, a little while ago I noticed a strange flight of an aircraft identified as “DUMBO-6A” which took off from GCLP Gran Canaria and continues to circuits over Atlantic ocean.
What do you think? Could it be a rescue flight? 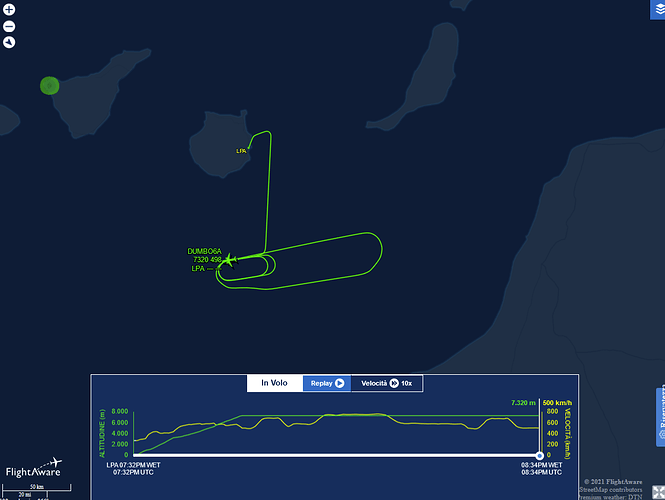 They have been having brush fires. It might be a fire fighting plane dumping water. https://www.cnn.com/2019/08/19/europe/canary-islands-gran-canaria-fire-intl-hnk/index.html

I don’t think so, in the meantime it has been doing circuits for an hour and then it is not necessary to go to the middle of the ocean to load water.

True! Didn’t know the scale on the map.

“Dumbo” looks to be a call sign for a squadron of the Spanish air force. Most likely A2A refuelling practice

That was my 1st guess. When you see these kind of patterns which last a long time, it’s usually military : refuelling, AWACS, submarine detection etc… It can be a civil flight which needs to jettison fuel after a problem, but it’s rare, and here it’s too low and the callsign is clearly military.

Real-time flight tracking with one of the best and most accurate ADS-B coverage worldwide. Check airport arrivals and departures status and aircraft history.

It was an A-400M flying out of Gran Canaria. *Disclaimer - info on the above page may well change if another flight operates under the same callsign. As I type this, the flight path matches the PO’s image.