So I’m having a strange stutter issue with a specific scenery pack and wondering if anyone has encountered something like this. I’m flying a short hop from RCCM to RCQC using kcai’s epic scenery
(Flightsim.to » Profile of kcai).

The scenery packs I’m using are:

I’ve tried this flight without these packs and it is very smooth. However when attempting to fly with this addon scenery, I get intense stutters that stop the sim for a good second or two before resuming at a smooth 60fps. It’s very jarring.

In the screenshot below you can clearly see when the stutters happen according to my GPU graph. 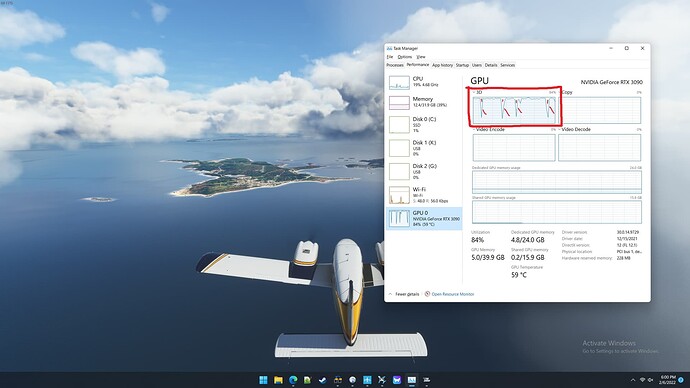 This is amazing scenery that would be flawless if it wasn’t for these strange freezes that appear. Again, I’ve flown all over the world in MSFS with some places having 100 addons and I’ve never experienced freezing/stuttering like this. So am trying to find out of there’s a fix that doesn’t involve simply uninstalling it all.

What would happen if you set your frame rate a bit lower?
I see people getting good smooth flights in the 30 range.
In your case maybe around 45 might work
It would probably take some load off your GPU.

The gpu is usually >85% even if flying over the open ocean, I think that’s just how MSFS behaves. The free FPS are much higher than 60 normally but I have it capped at 60 with vsync.

It doesn’t ever happen even in the middle of NYC, just this scenery it seems. It’s a mystery

It seems WU7 broke many third-parts (pay and free) mesh mods. With mesh mod the sim freeze a lot, i tested it with free throglodytus mod (Italian Alps 20 Dem, Austria 10 Dem, Switzerland from flightsim.to) and Taburet mod too (Italy Dem 10m from simmarket). I tested it with default airplanes and community folder with mesh mod only, deleting rolling cache. MSFS became unplayable with this mod for me. Before WU7 all the mesh mod worked fine. Does it happen to you too? My system: I9 9900k …

Oh gosh, I should have looked closer at the pic of your GPU.
I assumed those were spikes, but indeed, its a drop, my apologies!!

Since you are in the air approaching the islands, try it without the aerial textures, see if that helps.

oh interesting, ill research this some more. it’d be both good and bad news if it was a sim-wide mesh issue