Here I come again with stuttering!
So something even stranger happened today then the last time
I complained about stuttering(please assume that I have everything setup and adjusted properly before replying).

Some of you might have already seen my thread about stuttering in VR on Ryzen 5 5600X, 32GB(this time @3800 CL17) and RTX 2080 Super. So I was selling my old GTX 1080 and the guy asked me to film GPU and benchmark and while doing that I said to myself why don’t you try MSFS 2020 in VR with GTX 1080, so I did. Guess what? There was no stuttering at the same settings as they were for RTX 2080 Super!!! Yes the object were ghosting and shimmering like on 2080 but only when I flew at 100 feet and looking at them through side window but no micro stuttering, very now and then slight stutter but other than that smooth as a super-cooled helium while 95-99% utilized.

Different time I assume? Much of the stuttering I sometimes experience is server-related. I often switch servers to get rid of them. If I play on European server when it had a lot of players around me, I experience stutters, if I switch to South East Asian server, they are gone immediately. I play on ULTRA on 5800x/3080/32gb ram.

Hi, I have a similar issues which did not happen with my old gtx980ti. When juddering and stuttering are happening, if I focus window to anything other than game screen would reduce them dramatically (but still shaky). Have you tried that?

You could also try my solution to the problem:

Hi, i also got this horrible stutter/Rubberband effect in SU5 Hotfix 2, but sometimes i got rid of it. Now i found out how to reliably get rid of it: Start my VR session → Judder/Stutter/Rubberband effect decrease my Render Scale in Game to only 30%! → still stutter! (i can stay now in the Graphics options) Press Ctrl-Alt-Del (your VR Headset gets black) and immediately after it gets black, press ESC Now the stuttering is gone! For 30% Render Scale. (look at the cockpit when moving your head f…

I’ve had this effect for months. In VR, alt tab to another app. Smoothness, but no mouse control. Alt tab back, mouse returns, but stutter does too.

I’ve always thought it was some kind of timing/interrupt conflict but I have not been able to really isolate it.

Do you have an ultrawide screen + normal screen? Please HAGS off and I think you can solve the problem. I just solved this last night…

Single 4K monitor plus G2 VR, and hags off.

Sometimes I get a stutter or two, but I can whip my head side to side and the image doesn’t distort or pause.

I disabled smt (multithreading) in bios…ran the game…reversed the process enabling smt…IMPORTANT you must cold boot and unplug your computer for a minimum of 30 seconds after holding down the power button for a forced restart. Then I enabled threaded optimization in the npc to on not global preset on. Looks better but still stutters at 100ft but not under 1000ft like it used to

Thank you for the information! I will try 1 and 2 as mine is VIVE!!!

How do you disable WMR cliffhouse, to get rid of the triangles?

Move it, or rename it so it doesn’t run. I named mine EnvironmentsApp.exe.bak

The cliffhouse won’t load or take up memory. But VR will work fine, when you hit the VR key (whatever you have it asigned to), it’ll just jump right in. 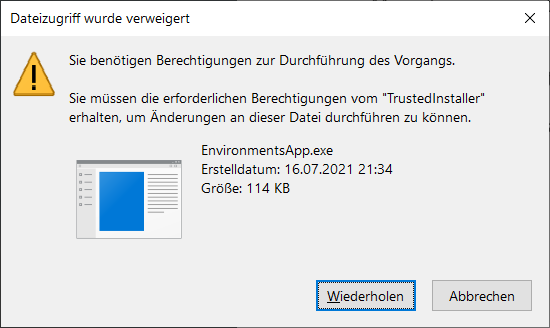 I am Admin, but cannot rename this. But thanks anyway.

You have to take ownership if admin accounts on your PC don’t have full access to this file.