Again I will say turn on dev mode and watch the ground roll stutters and whirling dervish vanish. Been getting a solid 60 FPS even while streaming with little to no hiccups aside from a little photogrammetry pushing my bandwidth.

When dev mode is on the log file is disabled and lots of stutter is related to accessing that log file. So if you don’t mind flying for flying then turn dev mode on and enjoy. Just shows how poorly coded the regular mode is and how badly it needs bug fixes pertaining to stutter and accessing the log book on ground roll, take off, and approach. All of these facets of logging the flight are causing issues.

Third party apps can also eat up CPU/GPU and cause stutters but for the core sim it’s pretty easy to see why there are so many problems in regular mode. Most of them are using dev mode.

@KWAiRT that is interesting if true. I typically turn devmode off when not in use as I find my mouse is always clicking on the bar while I’m in VR.

I’ll try it again and see if performance improves. Some people when they have dev mode enabled they also have disable volumetric effects checked and that provides the fps boost people see.

Also I was noticing some audio stutters on my Quest 2 when loading scenery which is the main reason that made me lower the Terrain LOD. This issue was fixed when I used my audio card output for speakers or headphones instead of the built in Quest 2 sound.

This thread has really simplified things for me.

And now I can take off, then confidently turn up the Render Scaling and LOD AFTER I am at a cruising altitude and flying toward my heading.

Then a quick tweak back to optimal 30 FPS specs for a smooth landing.

I have an annoying lag/stutter on landings when the wheels touchdown in the runway. It happens the 90% of times, with any aircraft and everywhere… It can be in enormous payware airports like KDEN or in very small default airports in the middle of nowhere.

I have tried everything to fix it, even disable the landing smoke effect, helps a little bit but not solve the problem.

We need a fix for this and all the issues that are discribed here!!!

Thank you so much for the info bro

I also wanted to say that what Grabber523 mentions above helped me just go from stutters but reasonable FPS to a stutter-free butter smooth FlyTampa KLAS airport environment experience! My FPS are between 30-50, but smooth and always limited by GPU. I can’t though get my GPU up to 30ms latency even by setting render resolution to 150+.

THANK YOU THANK YOU!!!

Yesterday I did some more VSYNC/GSYNC tests since the renderer was updated. Thankfully they did fix the VSYNC issue and GSYNC is back to normal operation and does not require VSYNC ON in the CP to work again.

So I decided to leave the sim uncapped in dev mode and do a flight up in the Yukon in the Otter. Here is a picture that describes the entire flight with live weather and absolutely zero stutter or loading indicators and all from cold and dark there and back with dynamic route programming. The only thing I did not do is shut power off to the plane when I landed. This can cause an FPS issue with the shutdown overlay hidden. So to avoid that I left the plane running. 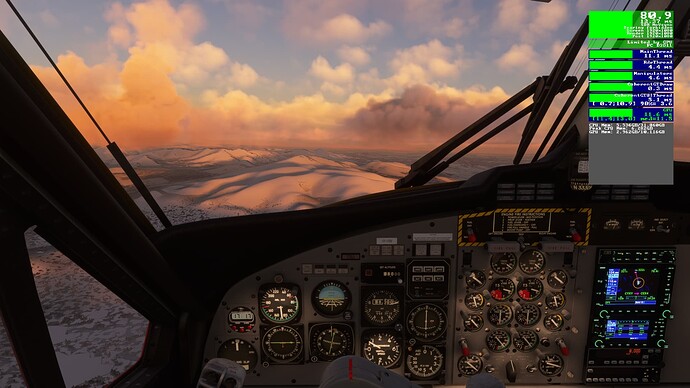 You can see that the memory usage is roughly that of an XBOX X with the OS loaded in a shared configuration. Thing to note here is that there was only one other plane operating in the region at the time so no other models were loaded aside from one other Otter on max LOD. This area also does not use photogrammetry and I am using stock terrain LOD 100. Still it was absolutely stunningly immersive from start to finish with my ATC mod from Stick and Rudder

I was crabbing hard both ways and had to beat the storm and get in and out before it hit. Thankfully I was just in time and was able to land visual with light snow and return to Whitehorse safely.

This is probably the key post on this forum. Should be pinned at the head of every page or part of an FAQ. Once again many thanks for all your educative posts on this. Trying my best to spread the word & pass on your tips to others. So many post with people having the same issue again and again. Perhaps a PDF summary doc would be good to be able to refer people to.

I think the point that @f14billy is trying to make is that there are numerous people that have experienced a bug with Photogrammetry where having PG installed from the world updates affects the performance in other areas.
For example at LAGuardia airport my main thread is at 25ms-ish. If I remove the world updates PG and keep PG enabled my main thread at LaGuardia is now 14ms. I still have PG enabled and still see PG at that airport.

Question !
Is this mainthread thing,something that Asobo can fix in the future or is it something that doesn’t need fixing.
I am asking only cause if it doesn’t,i don’t see the reason behind the 400 terrain LOD and the 200 Objects LOD if even 8 cores can’t handle the calculations?

Main thread is more about single core speed/IPC than number of cores.

MS/Asobo will keep trying to optimize performance, but they can’t make your CPU perform like a more modern one.

Most other games are GPU limited, not CPU limited. It’s because the CPU has a lot more to do in a sim like MSFS. Like I said, they will keep optimizing the multithreading, but the thread that syncs everything back up (the main thread) will likely always be some sort of limitation.

Aha.Now i understood.
Thank you for your time.

@MortThe2nd You are right, Photogrammetry impacting CPU is not a bug. However the bug found goes like this:

Gotcha, that is odd.