Here’s a quick test showing the performance difference between DX11 and DX12 using the latest 1.27.13.0 update. This a system with a Ryzen 5950X, ASUS TUF 3090 OC, and 64 GB DDR4 3600 Mhz. The test was done at KLAS with the FlyTampa scenery and the PMDG 737. All settings are at least Ultra, with several settings (like shadow size) maxed out. I’ll let the pics mostly speak for themselves, but it’s quite clear the differences between DX11 and DX12. Performance wise, I find they perform about the same in SU10, with perhaps a very slight performance improvement using DX11. However, it’s pretty clear DX12 puts a heavier load on the GPU. The reasons for that can be debated. Note that I intentionally increased the graphica settings to compare the worst-case resource usage between DX11 and DX12. Performance is obviously not ideal in this type of scenario.

I wanted to do this to quickly show the difference between DX11 and DX12 on a 3090, where VRAM is never a limiting factor on DX12. Obviously this is not a comprehensive test, as that would require a lot more time. Other people with other systems may have significantly different results. I’d encourage others to post your comparisons as well.

On that machine that performance is abysmal and is almost certainly down to your Terrain LOD. Try it at 250 and see how it is. That one setting is still killing this game because it doesn’t matter how powerful your GPU is, if you turn TLOD up to 400 you fps will be rubbish. The problem for me is that at anything less than 200 the whole point of FS2020, and the thing that made it so special, gets degraded to such an extent the game simply isn’t the same.

Well you can bring any card to its knees if you put the settings high enough. He has even upped his render scaling

I agree with comments above. You need to reduce TLOD + use clear weather in all your tests + Default Airports and then you could compare DX11 vs 12 and have some clear results.
I have 11900k at 5.1ghz overclocked + 3090 Asus OC extreme and the maximum TLOD for smooth flights and testing is 200, while on heavy demanding pay ware airports i use 100.

On that machine that performance is abysmal and is almost certainly down to your Terrain LOD.

I did this at terrain LOD at 400 partly to compare multithreading performance between DX11 and DX12. Render scaling was even bumped up to 120% to slightly exceed the pixel density of 4K. I’m well aware terrain LOD significantly impacts CPU usage, and decreasing it would yield better performance. This is arguably the most brutal of performance in terms of graphics settings, but nicely highlights the resource usage between DX11 and DX12 at arguably the most graphic intensive scenario.

Well, I’m not sure I get the point then. It’s interesting to see, but it won’t really be telling the devs anything they don’t already know. What it does demonstrate is that the relationship between terrain LOD, view distance and image quality really needs a lot of work. To get a decent and realistic picture our only option is to turn that setting up, but it has a completely disproportionate impact on the sim’s performance.

DX12 is clearly where the future lies for this sim, and I can’t help but feel a bit disappointed that it’s not in a better state after so long in development. I really thought that SU10 would be the step change that unlocked pandoras box and allowed the devs to stop concentrating on the performance of the sim and start concentrating on all the other stuff.

Unless the final build brings us a curveball I fear we’re not there yet.

With this latest update, I am able to push my LOD to 250 or so on DX12 and performance is good… not great, but not terrible by any stretch of the imagination. And the artifacts are gone!!

I would say the same. Tentatively I think 250 might be possible again, and I can go back to 4K. With the previous build, as soon as I used 4K it was causing guaranteed artefacts.

I haven’t had time to try Bijan’s seasons again. I wondered (read am praying) if the now abandoned memory optimisations were causing the performance hit there.

It’s more to generate a discussion about DX11 and DX12, particularly the resource usage. I’d agree DX12 has a lot of improvements to be made, but it’s certainly signficantly more optimized in SU10 than the initial DX12 implementation in the prior SU.

Unfortunately, it’s pretty clear the current DX12 state will be problematic for users with limited VRAM due to the memory hogging in DX12. Because of how DX12 works at the hardware level, this will likely need a significant overhaul for future DX12 builds.

I use pretty much the same settings and I have been getting great performance.
maybe due to the SSD drive

When SU10 first came out it was awful for me because of the artefacts, even with 11GB VRAM.

Dropping my resolution just slightly off 4K, changing my Texture Resolution to high instead of Ultra and my TLOD from 250-200 actually gave a decent performance and got rid of the craziness. I also had to uninstall Bijan’s Seasons as there is / was a definite performance hit with it sadly.

Once I got the VRAM under control on all but a couple of occasions (where it randomly spiked and the fps dropped to 12 or so) the previous build wasn’t so bad. The kicker being though that I had what were significantly lower settings than in SU9, and hugely lower settings than the first SU10 Beta.

I cap my fps at 30 but even so, no matter what I do (other than increasing the render scale beyond 4K with TAA) my GPU is generally sat between 50-70% and it’s the CPU that is getting beaten again.

I use pretty much the same settings and I have been getting great performance.
maybe due to the SSD drive

Using an SSD wouldn’t help much beyond possibly reducing stutters due to texture load-ins and decreased loading times.

It’s clearly says mainthread-limited. That means your CPU is overloaded to keep fps higher than 30FPS. As mentioned turn down t-lod until you have yellow colour instead of red at mainthread.

Why do people run the sim over their hardware limits?

Turn down setting and have all green you get above 60fps.

All yellow above 30fps.

It only needs 1 of those to be red and you have less than 30fps.

It’s clearly says mainthread-limited. That means your CPU is overloaded to keep fps higher than 30FPS. As mentioned turn down t-lod until you have yellow colour instead of red at mainthread.

Why do people run the sim over their hardware limits?

Getting 25 fps on the ground with every setting maxed out in one if the most scenery-dense areas is running over the hardware limits? Performance can be improved if needed. This was a test.

Getting 25 fps on the ground with every setting maxed out in one if the most scenery-dense areas is running over the hardware limits? Performance can be improved if needed. This was a test.

Yes it is if you want to have more FPS there with the hardware in use. I tune my sim to always run at minimum 30fps. I could tune it up to 60FPS as well.

Well i now know it was test

I think it’s a better test if you turn down all settings to minimum and unlock fps-limit and see what you get most fps.

Because when mainthread is limited it also blocks the gpu.

I think it’s a better test if you turn down all settings to minimum and unlock fps-limit and see what you get most fps.

We could do that, but my 3090 will start the coil whine singing. Sounds like a cricket in a glass case…

Because when mainthread is limited it also blocks the gpu.

With DX11 I would agree. However, the render time for the CPU and GPU are actually the same in DX12. It says limited by mainthread, but it was alternating back and forth.

Sorry, about that i didn’t realised it was a test.

I have found issues that cause really heavy cpu load when turning down all settings and only increase one at a time and watch what decreases most cpu or gpu. That also helped me optimise my settings to what i can reduce or skip to be able to increase the things i need high.

I’ve seen those running the sim like you did in the test and complain about performance.

No worries, I like to put it to the extreme test. If helps highlight (at least in my mind) where the biggest differences between DX11 and DX12. For example, DX12 should help with the mainthread render time, but it’s about the same if not slightly worse in DX12 than DX11. This was greatly improved in the first SU10 beta release, but I didn’t do a direct comparison.

I can’t use dx12 with my rtx 2080 super. But i bet some do and think dx12 should automatically be better but not realise it requires more VRAM that makes the cpu perform worse because the gpu limits the cpu.

Here’s my quick’n dirty comparison on a 3070

Decidedly a mixed bag for me:

First of all: the artifacts in DX12 seem to be gone for now.
The difference in pure FPS performance between DX11 and DX12 is negligable.
Distribution of the workload onto the different cores seems to be about the same in DX11 and DX12 which is a bit of a letdown.

As in the previous versions microstutters are far less frequent and less noticable in DX12, but they are not gone completely 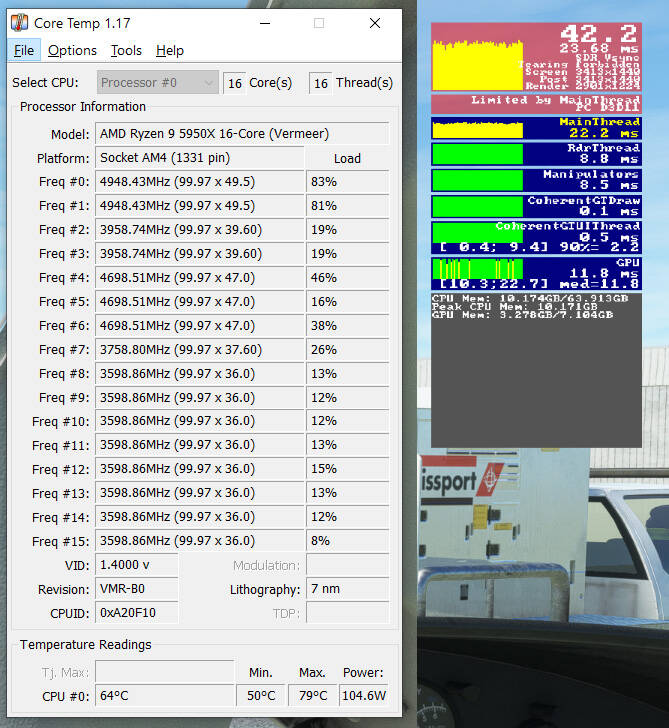 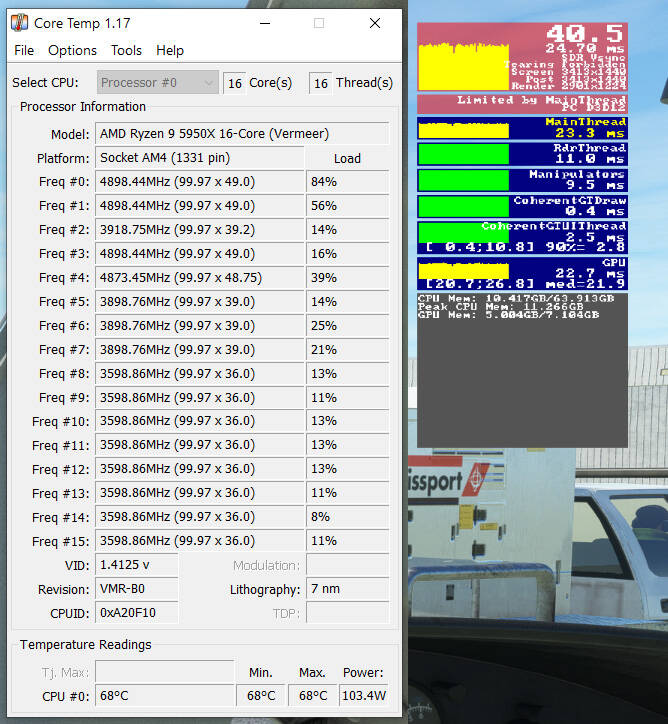 Strangly enough after flying a pattern around my favourite airport I got very bad performance (no screenshot, sorry) on landing in DX12 with FPS in the low teens. And after I had rolled back to he same parking spot and powered down the aircraft, the performance remained 10 FPS below the value I had after loading the flight. When restarting the flight, the FPS jumped back to around 40. 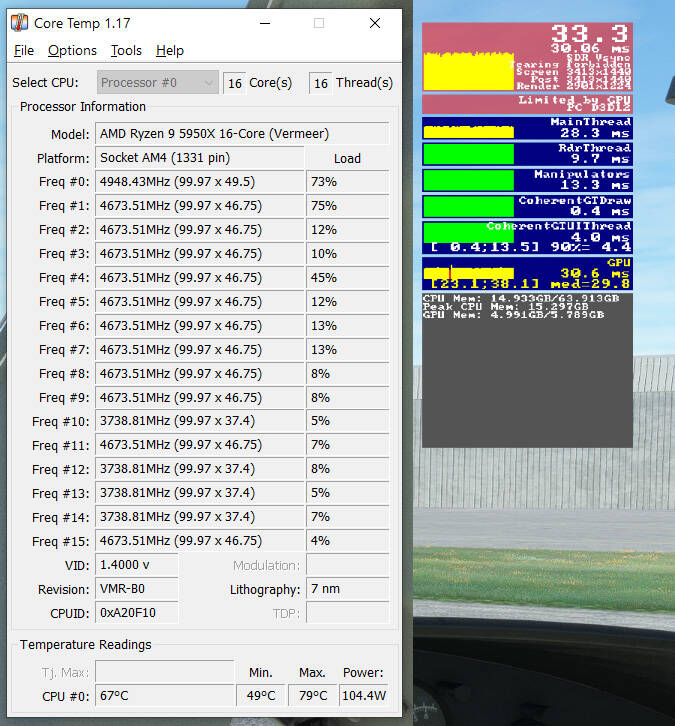