The game was running flawless before but now with SU5 the game is nothing but a graphical nightmare. I’m playing with the same ULTRA graphics settings as before but now it looks like (see photo). Any tips on how to fix this? 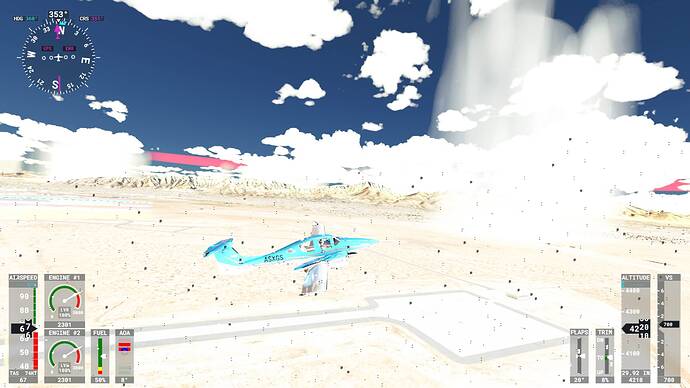 Wow! This looks truly terrible. When people complain that it’s unplayable I usually think it’s hyperbole but not in your case. I don’t have a clue as to how to advise you but I can tell you that my sim doesn’t look like that. I notice that the clouds are less textured, and the ground detail pops in a little too late, but it’s certainly not “unplayable” for me.

Mine had been ok but today looks similar to this. Does your world map on the main screen (where you select departure airport etc) look blown out white too?

I’ve uninstalled and deleted the entire thing. I’ll come back when it’s in a useable state

Yes, the world map is very glitchy too. Also get a lot of those glitchy looking squares all over while on the world map.

SU5 with my configuration, it suits me fine Content Creators

There is indeed a drop in quality, but for me, since my interest is more on the fidelity of flight than the image, the fact of being fluid and I have no CTD with the hyper trending disabled, I am happy to be able to enjoy the game in 4k Ultra without CTD. Ok, maybe just the clouds that have diminished makes me tick. Add a slider, full flight sim for the neophytes and it will be great. PMDG SU5, Nice views with out CTD

The game was running flawless before but now with SU5 the game is nothing but a graphical nightmare. I’m playing with the same ULTRA graphics settings as before but now it looks like (see photo). Any tips on how to fix this?

Yes Launch the Game and get to an Ingame screen sitting on the runway is fine, then hit alt tab and launch the control panel for your graphics card. Go down to color settings and edit it in there until it looks normal again.

Mine does the same thing from time to time, except it will look like that, I’ll fix it, play the game, quit the normal way, and the next time its dark as night. I suspect server/network issues somewhere in the pipeline but dont have adequate info to point any fingers…

I think I fixed the issue. I updated my NVIDIA drivers to the most current and made sure to select the clean install option for the driver install. After doing so the game seems to be displaying properly and looks beautiful. I’m getting a smooth 60-80fps with ULTRA preset and 200 LOD over downtown LA. The only graphical complaints I have remaining are the distant pop-ins of trees when moving the camera and the VFR map lacking roads/details it used to have.