However, maybe I am not a good judge, and someone could SUBJECTIVELY argue that there are points in this image that are not as good as before

The funny thing is, I remember how majority of people confirmed that the graphics were back to normal and fixed with the SU5 hotfix 2 update. Now all of a sudden, over the past 7 days, there’s been a new influx of complaints again. I can’t quite trust the new influx though.

Is a fact that the quality of the update is not as good as before.
The same that water textures and clouds are not as good as when the program was realise
I work woth everything in ultra, and render scale 100. Never have slutters until the last update

I have to call you out on your observation.

Now as to the reason why you are using more memory both CPU and GPU.
You are rendering at 6144x3456 which is equal to 21,233,664 pixels.
I am rendering at 2560x1440 which is equal to 3,686,400 pixels.
Another way of looking at it is you are displaying 7.8 times the resolution then I am.
This is the reason your memory usage for the CPU and GPU is higher than most other people.
Because your CPU and GPU needs this memory to process your rendering scale.
I also need to add this extra memory has nothing to do with the Flight Simulator usage.
I would suggest that you reduce your render scale to 2K and take a screen shot and you will see that all of my statements are correct.
Happy Flying

I don’t know about the majority, but the hotfix 2 update didn’t do anything for the issues I’m experiencing. My problems in VR have been consistent since SU5.

I honestly don’t care who believes me or not, I just want the ■■■■ thing fixed. I’m all for XBox players joining, lower end machines being supported, etc. I just don’t think that should be done at the expense of the existing users.

I simply don’t get why people want to discredit those of us who are still unhappy with the downgrades. It is hard enough to get Asobo to address issues without having a fractured user base arguing over whether they are real or not. With all of the different possible hardware combos out there, coupled with different people’s varying expectations and tolerances, it is no surprise that not everyone sees the same thing. That DOES NOT, however, mean that those who do see the issues are crazy or dishonest.

My problems in VR have been consistent since SU5. 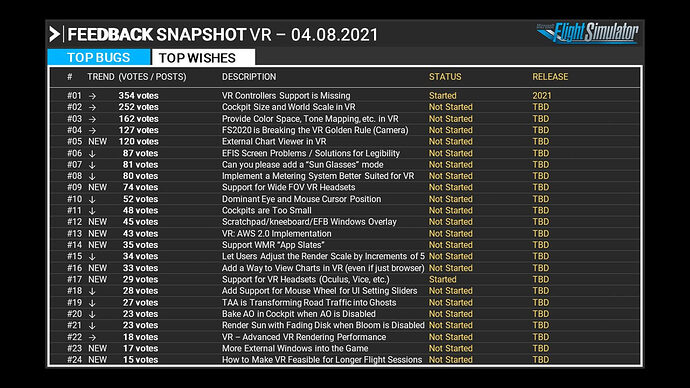 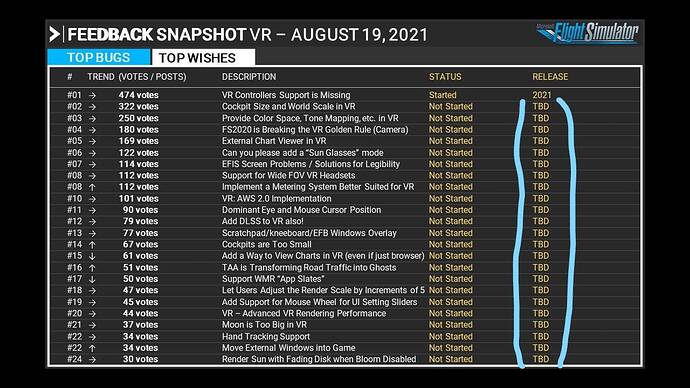 At least prior to SU5 it was in a state where I could enjoy flying. Unfortunately not so now.

You are 100% correct. I do not know why people can’t tell the truth?

I simply don’t get why people want to discredit those of us who are still unhappy with the downgrades.

So, to summarize your post: The sim doesn’t use a lot of memory unless it NEEDS to.

Are you saying that is a BAD thing?

You still don’t get it I suggest you read my last post again.

Because your CPU and GPU needs this memory to process your rendering scale.
I also need to add this extra memory has nothing to do with the Flight Simulator usage.

Because your CPU and GPU needs this memory to process your rendering scale.
I also need to add this extra memory has nothing to do with the Flight Simulator usage.

Beauty is in the eye of the beholder so it’s said:

I have read your posts. You are complaining that the sim uses less memory and that your graphical quality has been reduced by 50%.

I posted an image that does use more memory because I have turned up the settings so that it NEEDS to use more - there is nothing stopping you doing the same.

Your claim that quality has been reduced by 50% means the previous image quality should be 100% higher (twice as good) as the images I posted.

Could you please point out where these images fall below previous (pre SU 5) ones?

I have read your posts. You are complaining that

I’m not reading the same and for the sake of helping here is: what @NineMile1 is saying is that comparing SU5 and prior versions, the game is now using half the memory when he is using the same settings as before. He is also noticing that when you configure the game to rendering at the same resolution supported by the gaming console, 4K, the VRAM used is very close of the amount of VRAM in the console, regardless of the video card VRAM amount.

@NineMile1 is this correct?

I have no intention to continue this subject with you.
All I can say is that I tried.
The only way you will ever use more memory is if you increase your rendering scale again?
But then what GPU will you be using because I am sure your 3090 will not cope.

I have had the ‘pleasure’ of going through all this with him before - several times.

His claim was that it is IMPOSSIBLE for the sim to use more RAM than the Xbox (16GB combined video and CPU). He was shown that this was categorically untrue, but still continued to make the claim.

He has now specifically stated that his graphical quality has been decreased by 50%! If that is true, then I maintain that there must be something seriously wrong with his system or settings.

The sim is using less RAM because it no longer NEEDS to use so much, but it will use more if REQUIRED. As I have conceded, it is possible that the optimisation required to achieve this has resulted in subjectively lower image quality. However, as I (and many others) cannot see this reduction (outside of the acknowledged issues already discussed), it would seem to indicate that IF this reduction does exist, it is slight.

I feel this is a reasonable summing up of the situation, but I would ask you to please, as someone who has been clear and reasonable throughout and whose opinion I respect, tell me where I am wrong or being unreasonable.

But then what GPU will you be using because I am sure your 3090 will not cope.

@TwoSuitz @NineMile1
I don’t believe you were understanding each other fully only because of a subtle piece of wording, but I might be wrong:

@NineMile1 to me is correct:

However @TwoSuitz you are also right to me:

But here is the difference of interpretation I guess:

So this is just 2 orthogonal ways of seeing the same thing which explains why you’re not understanding each other in my opinion, why you’re also therefore both right and wrong somehow

PS: in any case we will be all wrong and we will all have to argue again about this in a week or so…