And this is exactly what we are doing here: coming back to the vendor and requesting to fix the broken product.

Ok, well give them time to fix it instead of making a thread about the same thing every 10 minutes

Maybe they should just roll back this whole failed update that broke everyone’s sim in one way or another? Just so Osobo could say we are now DX12? GOTY should be taken away from them!!!

I guess the issue is they said F12 will reset it and it doesn’t. The other thing it didn’t mention is that if you pause TrackIR to make changes to switches etc. it snaps back to pilot view and you don’t see what you paused the screen to adjust. Even the Camera switch to turn trackir back on won’t work until you unpause trackir. They tried changing maybe thinking it would be a good thing but made planes like CRJ impossible to fly.

The real problem here is that we’re all over the place on this release. Some of what has been described as “bugs” aren’t bugs to everyone. You know that when SU7 came out, someone out there said “Wow, that fog is really low! COOL!”. So we have no idea how many people LOVE what others HATE, and MSAsobo knows that too. That said, I know you’ve seen posts from people saying this was a GREAT update (the infamous “Thank you Asobo” posts). And if MSAsobo acts, what should they do? Cancel what others love because some of us don’t like it?

I’m telling you, they need to incorporate sliders for all this stuff. Let US decide what we want as much as possible. And if too many sliders cause delays in the code processing, center them on the weather, because from what I see that tends to generate the most posts.

As for the TrackIR problem, that’s definitely a bug and should be addressed, and from what I’ve read, they’re doing just that. They’ve put out new code and fixed bugs in the past, and we’ve moved on. They haven’t addressed them fast enough for some, but that’s life in the big city and we’re pretty much powerless to do anything but complain.

Just for your information: after SU7 I experienced problems with TrackIR on the first 3 flights. I had to reboot the sim just once to get the TrackIR back online. The other 2 I just had to set the slider to on in the camera settings. But so far no more problems. It just works fine. Didn’t change anything but switching to vanilla TBM, since the Mugz mod has big compatibility issues. As said elsewhere in this thread, it’s a great boost for immersion.

You know, sometimes clouds are on the ground. It’s called fog

That is a laughable comment. Of course we all understand what fog is. Unfortunately, at least where I fly in the US, the sim now thinks there is a low level dense layer of “fog” almost all the time and everywhere during daylight hours. Thus, when visibility is supposed to be 10 miles or greater, I can’t even see the runway until I am 1/2 mile away or basically right on top of it. VFR flying after SU7 is no longer a thing. Very interesting “feature” in a sim that touts detailed ground scenery and accurate real-life weather as two areas that set it apart from other flight sims. lol

Not yet checked, but maybe more fog will bring the user more FPS on low machines

Yeah, some parts of the world a now constantly covered in fog.
And worst of all it pops in and out in flight.

So while it’s great they added METAR based weather around airports it definitely needs quite some tweaking.
And I agree that a slider to adjust the the “level of realism” for the user could be a quick win till this fine tuning of the new system is mastered…

The forums are a very small tiny Compared to millions of users. The small minority who can’t or will not enjoy the sim…MS /Asobo can never ever do anything right they cannot win for losing.

Most players think the weather is stunning. Most players like the planes and flight models.

DCS guys trolling the forums complaining about the fidelity of the F18.

I have to agree, as I am also very frustrated with recent releases. I spent several thousands of dollars last year in top of the line equipment to be able to enjoy this sim to the fullest. Alienware Aurora R11, i9 10900kf, 32GB RAM, NVIDIA RTX 3080, HP Reverb 2, rudder pedals, Honeycomb yoke and throttle quadrant. I was in heaven when everything was hooked up and running. Now I’m constantly frustrated, settings are all changed after update, weird things going on at my home airport like trees floating above ground, graphics have seemed to decrease in VR, wheels on aircraft are square, lights seem to be big fuzz balls, and now I have mouse issues, can’t control menus in VR, if I try to use the mouse my throttle stops working until I right click with the mouse, and the weather seems worse. I have tried all the tweaks and fixes I see online with no luck, so I am in a very frustrated state of mind at the moment. The VR controllers are a joke, I’m thinking that was setup for X-Box users that only have the X-Box controllers and not physical yokes, rudders, or throttles. I sure hope that their not prioritizing X-Box systems over PC’s. Well that’s my rant. Now back to try and fix this stupid mouse!

…On Twitter? Why on earth wouldn’t “they” post something in Known Issues in Forums or some other MSFS realated sight etc? I am flabbergasted at the number of bugs since the latest Update. Hugo can you point me in the right direction other than Twitter to read about what Asobo says “they” are working on? Thank you

Why on earth wouldn’t “they” post something in Known Issues in Forums or some other MSFS realated sight etc?

Right here as part of the patch notes.

As for the “working on it” part, that’s of little comfort to anyone who’s potentially stuck with these bugs until the next code update in February, as they’ve said nothing about a hotfix.

I was in the same boat but I’m more interested in the Tobii eye tracker I think. It sounds like its potentially much better than TrackIR. More expensive mind you.

The small minority who can’t or will not enjoy the sim…
Most players think the weather is stunning. Most players like the planes and flight models.

Exactly, only the negligibly small proportion of around 30% is dissatisfied.
Completely incomprehensible why they are not happy. They certainly have far too high demands and, as with the satisfied part, they cannot sit comfortably in front of the TV and enjoy the flight in 3rd person view with autopilot. Absolutely incomprehensible. 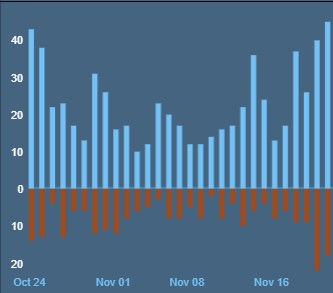 Thank you for the feedback about SU7. We have documented your concerns and brought these issues to the attention of the developers. If you have a specific bug to report, please post it in the Bugs & Issues subforum or upvote an existing thread if someone else has already reported it.