Suggestion for performance optimization: Make Terrain LOD only affect Terrain and ground textures (with separate LOD sliders for other things)

The Terrain Level Of Detail setting makes one of the largest impacts to performance in the simulator, because it affects the rendering distance of everything from ground textures, to buildings, to trees and other vegetation, to terrain and photogrammetry, etc. I will suggest a possible way to reduce the performance impact of the terrain LOD setting in the simulator, so that users can have finer-grained control over our performance and image quality.

What is the definition of Terrain?

Terrain is defined as the specific physical features of an area of land.
An example of terrain is a rocky and jagged coastline.

Terrain has nothing to do with buildings. Nor vegetation in my opinion. So the Terrain LOD setting should not affect them directly.

What is a “slider”?
Slider is a programming term which describes a type of user control. See the image below:

Giving us separate LOD sliders for other objects would help us optimize performance better, while still maintaining high image quality.

We want nice looking terrain, mountains, ground textures, far in the distance without having to bump up the buildings, photogrammetry, vegetation, and everything else’s LOD to 400 (or 200 or whatever).

I fail to see what you want to change, exactly?

The buildings and vegetation render distance does indeed rely on how far the terrain data is downloaded, because you need to know the properties of a tile to know whether to place a tree or a building on it, and if so, what kind of object would appropriate. So, the TLOD has to be a limiting factor for object distance.

And if you watch the latest Developer Q&A, you can hear Seb explain that the other sliders do determine the drawing distance of objects within the outer TLOD perimeter, but not beyond it.

If I understand your proposed “simple solution” correctly, that would only serve to limit current flexibility in terms of drawing distance versus object density, as far as I can tell?

And if you watch the latest Developer Q&A, you can hear Seb explain that the other sliders do determine the drawing distance of objects within the outer TLOD perimeter, but not beyond it.

First of all, the buildings and trees options are not “sliders”. The terrain LOD and objects LOD settings are an example of a slider. (and the rendering scale, etc) I understand this is part of where the confusion is stemming from, so I’ve just updated my initial post.

Secondly, I explained in my initial post that the buildings and trees options do more than just affect rendering distance. They also increase or reduce the quality of objects.

What I am suggesting are sliders for rendering distances of other objects independent of terrain LOD and object quality.

The biggest performance impact comes from photogrammetry with a high terrain LOD, but I don’t know if they’ll be able to separate photogrammetry from terrain.

that would only serve to limit current flexibility in terms of drawing distance versus object density, as far as I can tell?

It won’t limit current flexibility, because object render distance is already limited by terrain LOD in the simulator.

MODERATOR EDIT:
This post and 7 below it were merged into this topic. Continuity may be lost.

When I turn photogrammetry ON, I need to reduce the Terrain LOD to maintain performance, which sacrifices AI generated buildings, tree distance, ground textures, etc.

I voted for your topic

Really? I thought terrain LOD only affects terrain, ie the textures. This is what I’ve read.

Isn’t it the building and tree settings that affect those same draw distances? They definitely do, but maybe not exclusively is what you’re saying? 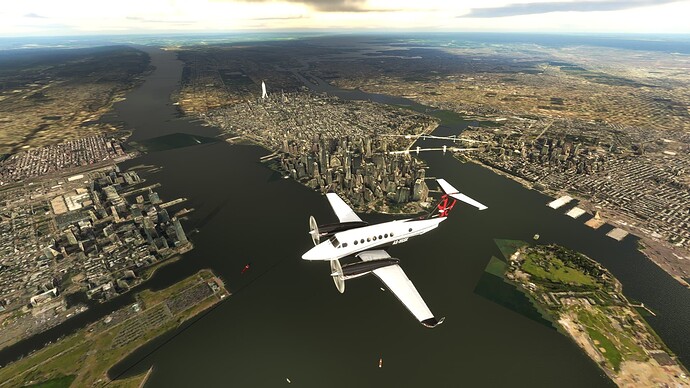 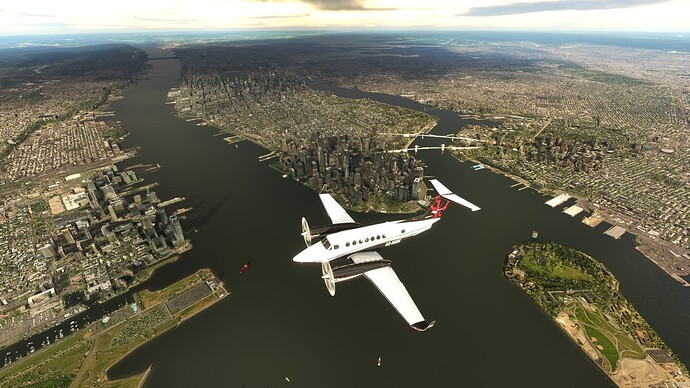 Thanks, right, but this is all photogrammetry in the screenshot, right?

But if you say it affects autogen too, I’ll take your word for it! Never really noticed as I always have LOD at 100.

Thanks, right, but this is all photogrammetry in the screenshot, right?

I’m not sure if that is all photogrammetry in those shots. I think there might be some autogen buildings way out in the distance (in the top right) but I’m not sure. I am certain that terrain LOD also affects autogen buildings and tree render distance. It also appears to affect texture quality somewhat. Oh, and even terrain

Some autogen examples (LOD 10 vs 400, no photogrammetry here): 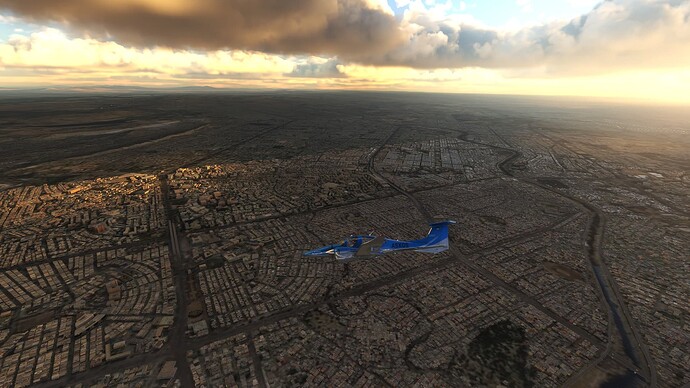 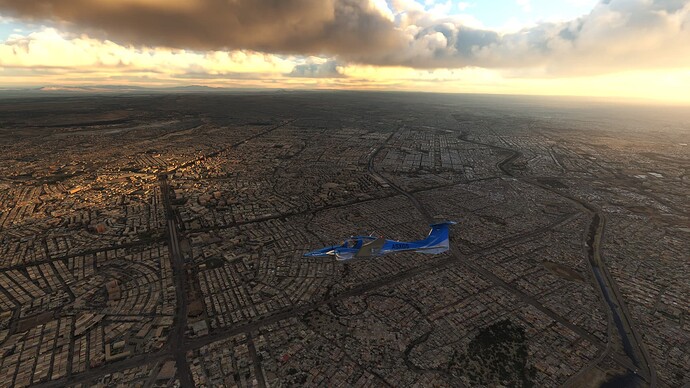 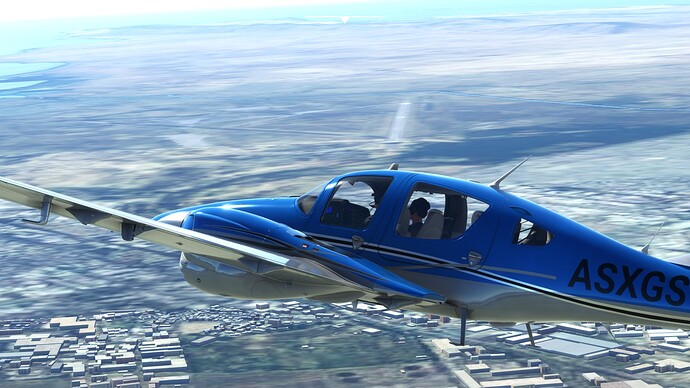 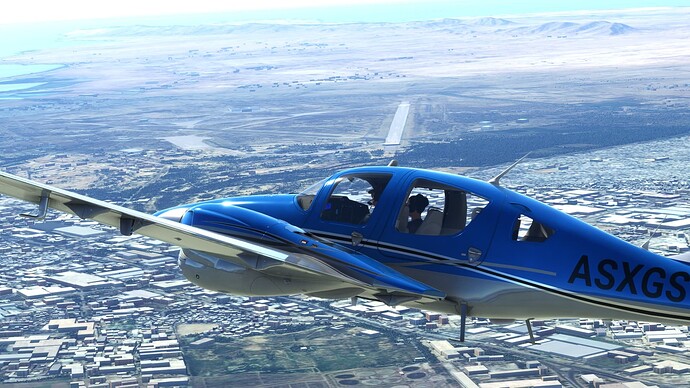 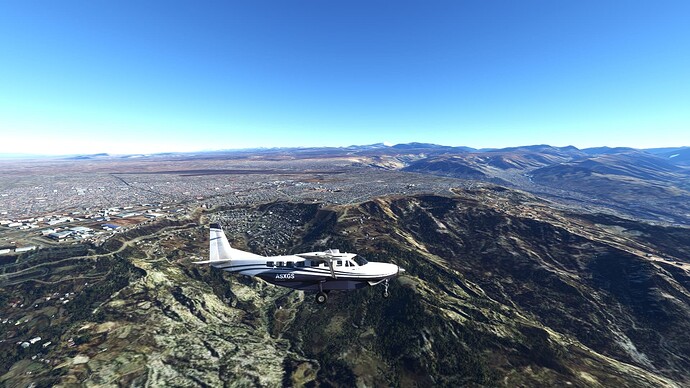 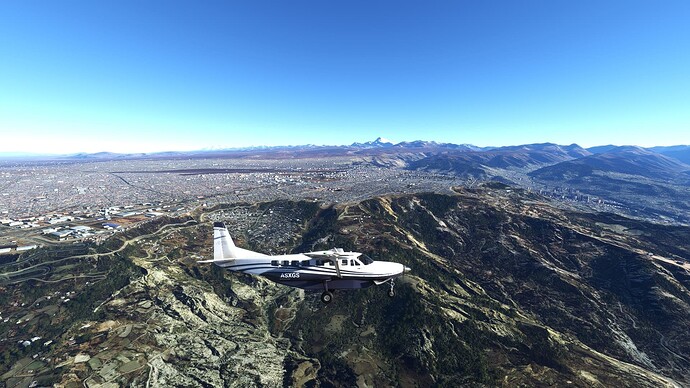 Tongue in cheek answer-
Rename “TLOD” slider to “CPU mainthread limiter” slider then noone will want to slide it to the max.

If my suggestion was implemented, I’m guessing more people could slide it to the max without killing the main thread. However they would probably put all of the other sliders to the max too

but at least there would be some finer-grain control over it, for the people that know what they are doing

I think TLOD covers all things terrain, trees, photogrammetry and autogen. it’s a horizon visibility thing. It could definitely be explained better in settings. I’ve never seen so many people complain about stutters after having bought a rtx30xx and immediately turned every slider to the max without understanding the impact on CPU and not just GPU. I have my TLOD set at 200, and my system lockednon 30FPS/60Hz and it’s smooth. TLOD 100 looks fine too. I really think the devs made mistake giving everyone 400 option, but they did ask for it!! Maybe like you say breaking it out further would help. Then again, maybe not. I think what is lacking is an official FS graphics system analyser/optimiser tool, they really should have one. The NVidia one just says turn every graphics setting to medium for me - LOL, no way! Someone could make a small fortune making one that works though.

I don’t see why any modern gaming PC couldn’t render basic terrain mesh and ground textures at long distances. I think the main issue revolves around photogrammetry. Some people even say that uninstalling the photogrammetry cities for a completely different area than they fly makes a performance impact, which obviously shouldn’t be the case.

I’ve not had those kinds of issues, so haven’t tried switching with or without photogrammetry, it may seems to affect me with bandwidth warnings when in a photogrammetry dense area (I have slowish fibre broadband). I suspect on high LODs it just picks up everything to X many miles so if photogrammetry is in that range then it picks that up too. Can’t think why other regions photogrammetry would affect performance, but who knows.with this sim!

I would like to contribute to this request with a few of my observations.

If #3 applies, then in my opinion they should separate photogrammetry into its own slider that can still go up to 400, while the rest of the terrain which is much less intensive on system/bandwidth resources can get a boost beyond 400 which will not only satisfy those seeking improved tree draw distance (as well as buildings and night lighting), but also those who want better depiction of terrain mesh which is one of the weakest aspects of this simulator (it could also allow for the removal of the coastline glitch workaround). That seems like the simplest solution to me.

Thanks a lot for your contribution!

I think the Rock of Gibraltar is an example of custom-made POI, and custom made POI seems to suffer from worse morphing issues than the standard terrain in some cases. Correct me if I am wrong.

Some pertinent info from the most recent Live Dev Q&A re: veg slider and Terrain LOD:

[Developer Q&A Twitch Series: March 23rd, 2022] Xbox Cloud Gaming - Timestamp Jorg - I don’t know if you’ve tried it. I personally think it’s pretty amazing how well it works. But what I really wanted to say was, we have to celebrate something: We are breaking records again. We are seeing the highest number of users in any month playing any flight sim ever. And the really good news is 80% of the people who try it via Xbox Cloud Gaming are brand new to the hobby. New people are lo…

My suggestion takes into account all of the developers publicly available discussions on it, thanks.