Terrain LOD has been degraded again!

Be careful talking about low altitude LOD, you’ll have a couple of forum members who don’t understand sarcasm splaining what LOD is and how it only applies to long range/distance viewing (high altitudes)

bbrrr xplane, never been a fan. i rather play trainsim or ets than.

Before the update it was much better, slightly blurry textures at high altitude were shown only at high settings, now with ultra textures (everything ultra actually) and 8x8 supersampling it looks like this. 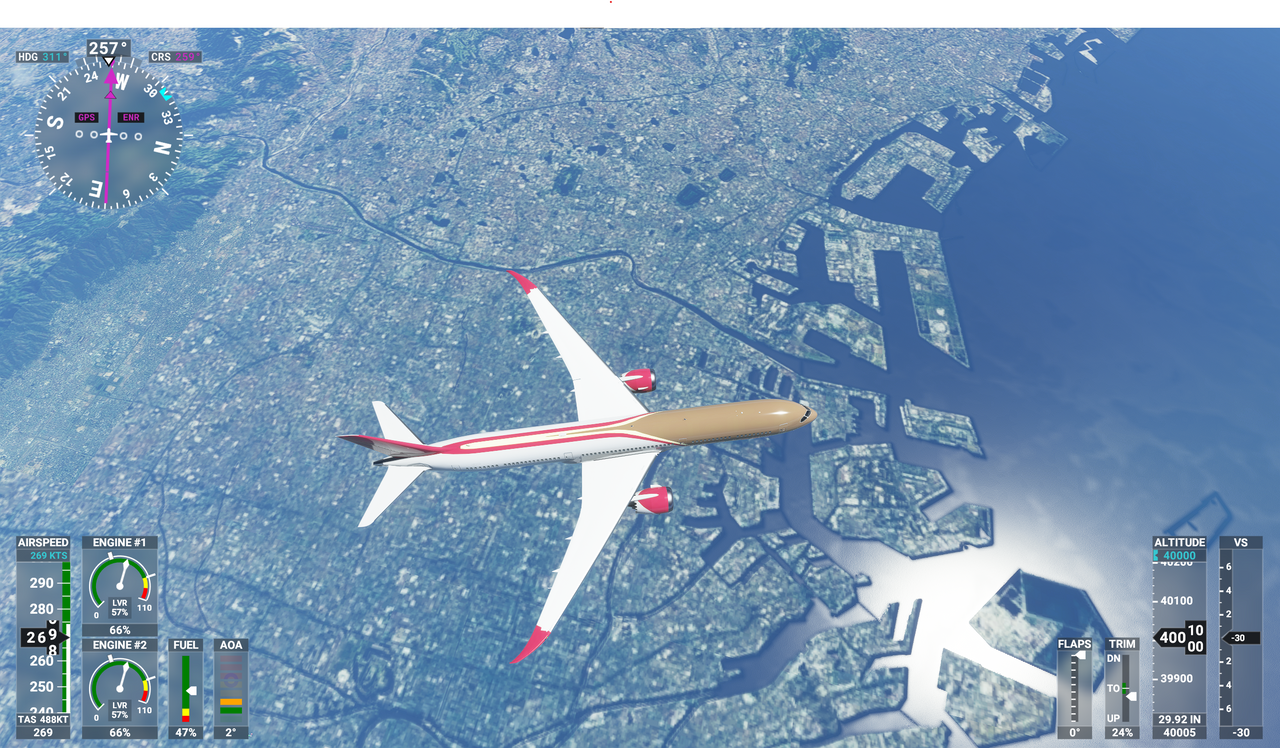 Where was this taken?

South of Murmansk on the way to Moscow.

So annoying. One of my biggest pet peeves about this sim.This was taken I believe flying over Delware @FL280
Is higher Zoom Level gonna overload Asobo’s servers or way too large to upload, higher ram demands?

I’ve noticed the sharpness degradation at high altitudes as well with each passing Sim Update. If you are at FL20+ and fly directly above any airport, just take a look down at the runway. It looks like 1998 graphics, it’s insane. It certainly wasn’t like that at launch.

This is definitely in preparation for the Xbox release. No doubt at all in my mind. Upvoted but not too hopeful.

Have you set your Terrain LOD to max 200 with Texture Synthesis, Resolution, and Vector to ULTRA?

I haven’t changed those settings ever since the sim launched, so if Asobo consciously changed the thresholds for those sliders/settings, it would be even more stupid since:

I can definitely try with those settings but I’m sure my performance is going to tank whereas at launch I had great looking textures at altitude with also fairly good performance. I’m sure most people posting in this thread would agree with me.

It is no secret that the sim looks worse than when it launched and performance has stayed the same or degraded further. I completely understand that things like improving the flight model and avionics take an “invisible” toll on performance but they are doing it at the expense of visual fidelity (or heaven forbid, they are trying to hit that 30fps on Xbox mark).

I went ahead and played around with graphics settings and I can confirm that at least in my case, if you want non-potato looking ground at high altitudes, you need to increase your terrain LOD. It’s a shame I didn’t save screenshots from earlier versions, but they are certainly moving the goalpost. 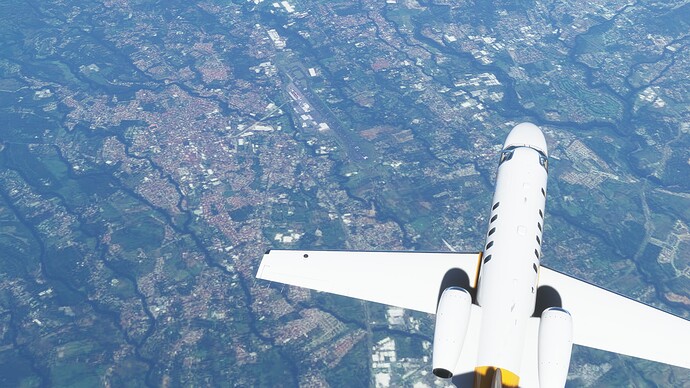 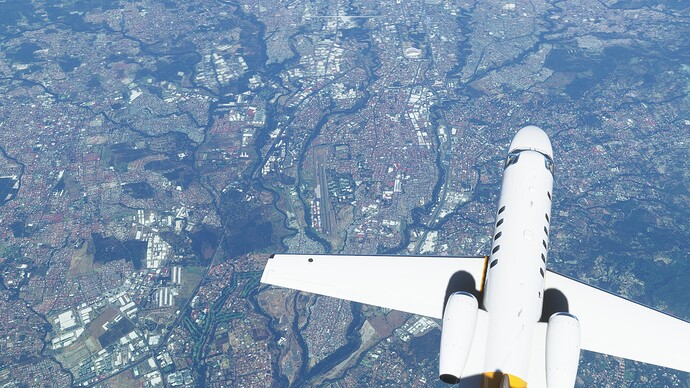 My graphics settings (before changing the LOD): 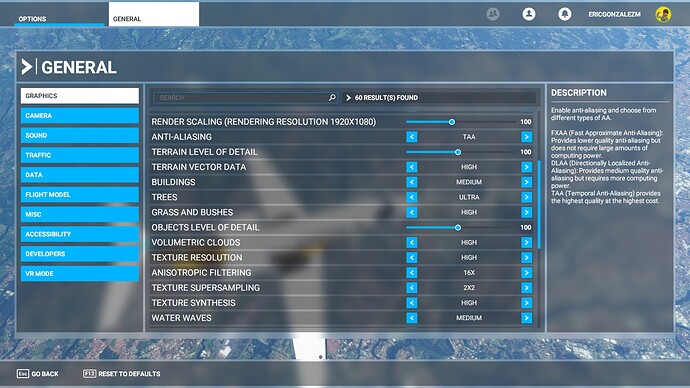 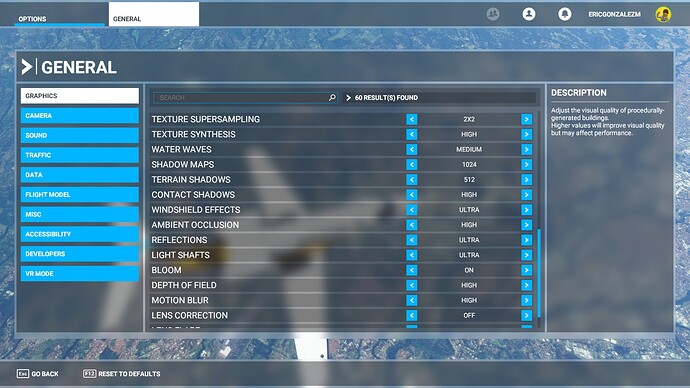 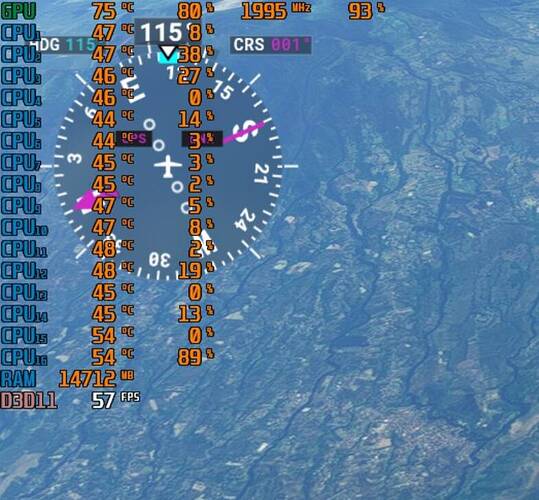 I believe the “serious simmers” are not the target customers for MS.

That said I hope that after the X-Box release enough of a sim is left on the PC to still make it worth to fly for me. I’m confident, though.

Blurry terrain at higher altitudes has always been a problem. After a few high-altitude flights, I honestly can’t see a difference compared to the previous builds.

For those who are bothered I would recommend giving this thread more attention, it explains some potential errors regarding how LOD distances are calculated.

Yes and the problem is getting worse update after update…

You are right .I am a tube liner guy now I find myself now having to go back to low slow flying.The LOD is getting worse and the performance is almost the same maybe due to the flight model improvements its being scarified.
Not sure it is a result of the new XBOX but I heard those are powerful enough to handle the sim.

Just to provide a counterweight to the argument things have been deliberately downgraded. I’m not saying the updates don’t change things, but it’s very rare that I’m seeing the issues that some other people are.

I took these an hour or so ago on a little hop from KPHX to KLAS, cruising at FL280. TerrainLOD is set to 250 in the user.cfg file and they are from a variety of different angles and zoom levels. I don’t see any change with the LOD set to 200. I think it’s hard to say the terrain looks anything other than pretty darn good…

Where I see a degradation is actually lower down, where you can see the difference between the highest quality then the fade out into the distance, hence the LOD of 250. 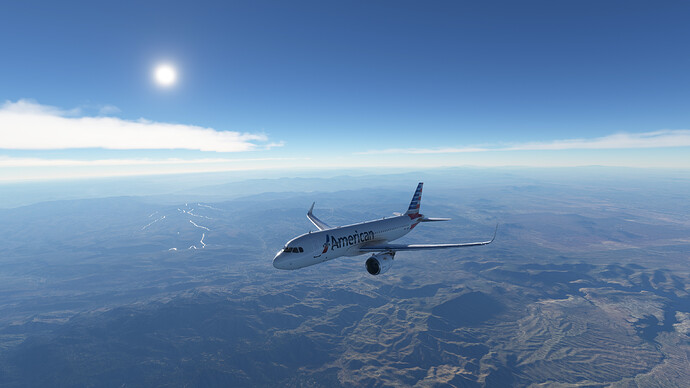 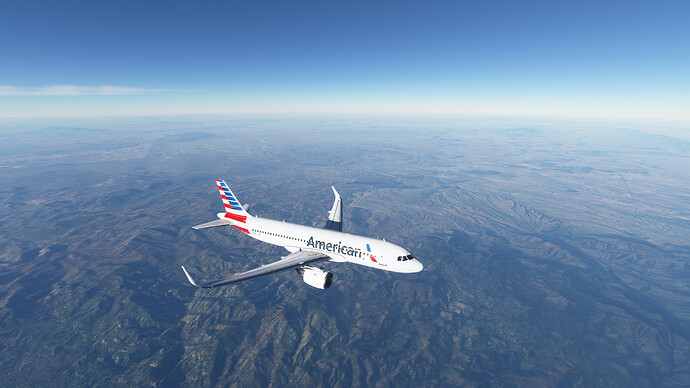 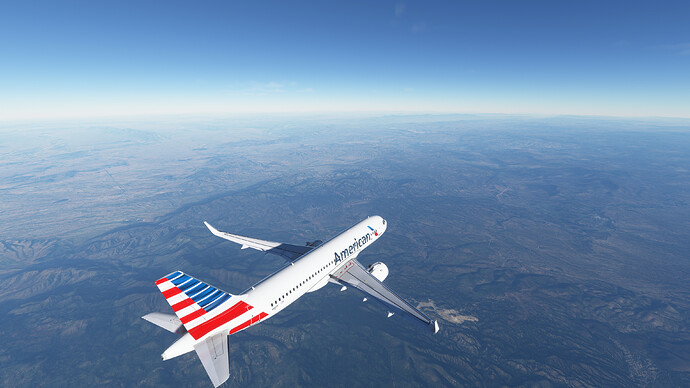 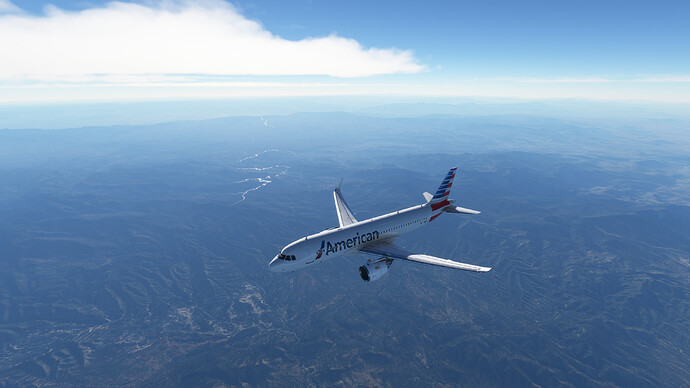 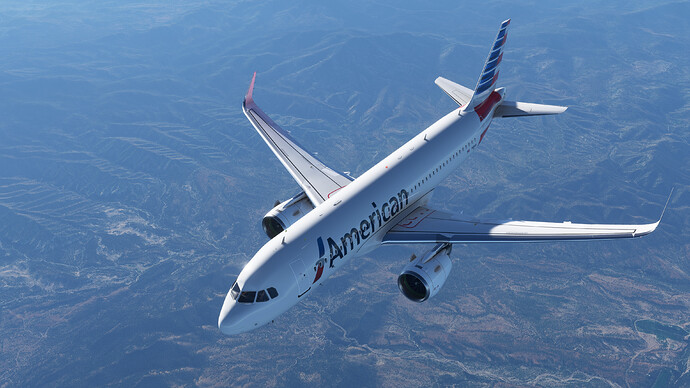 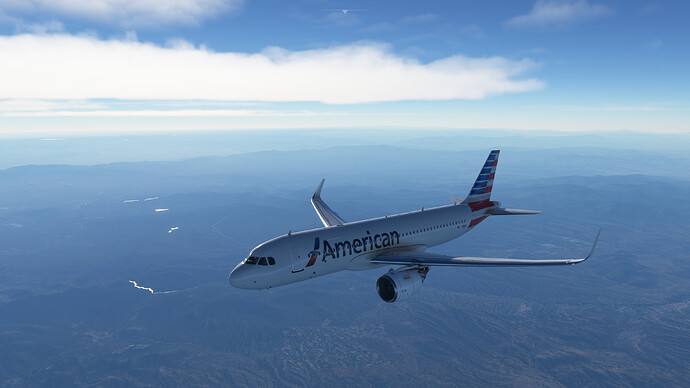 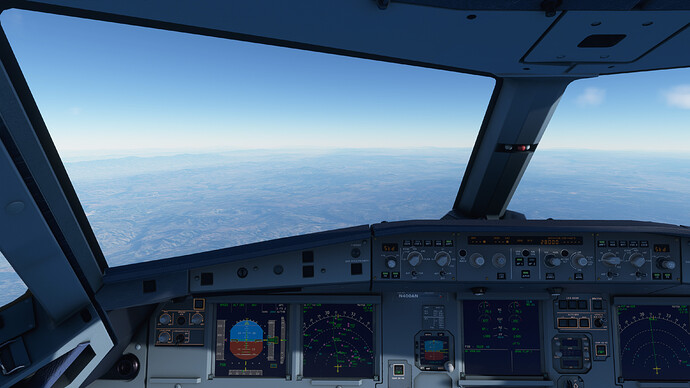 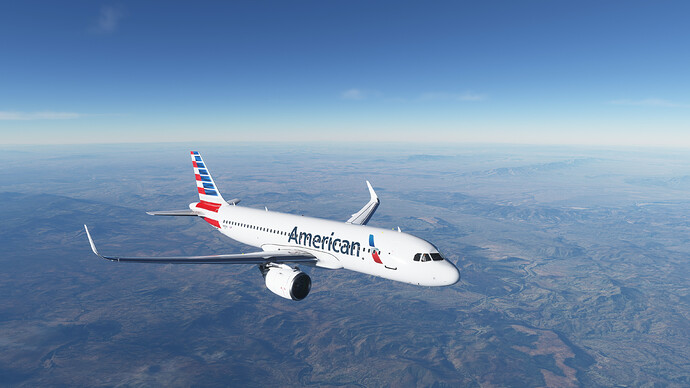 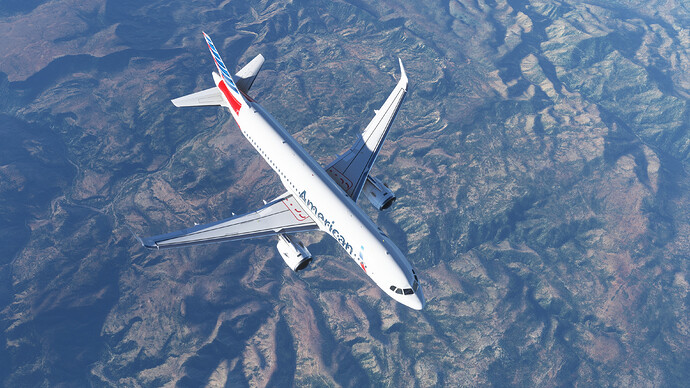 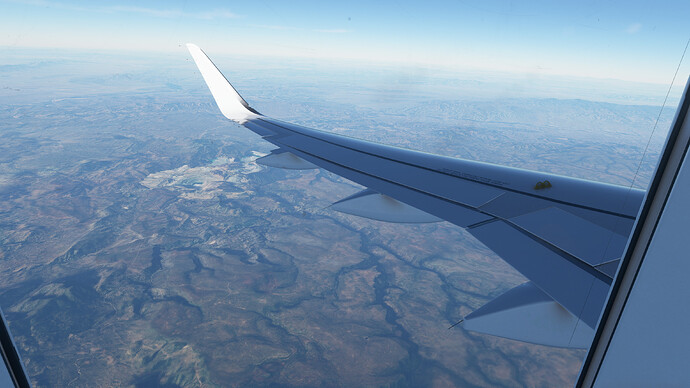 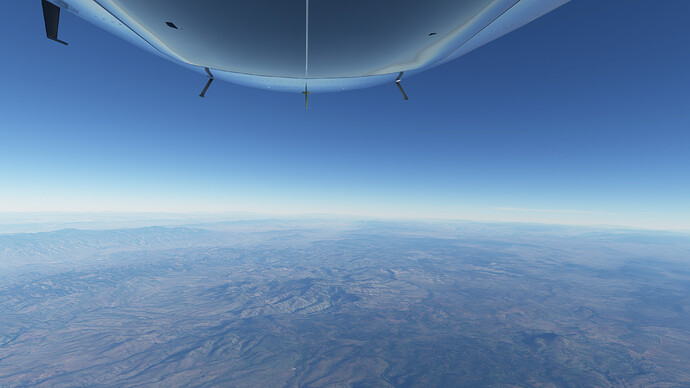 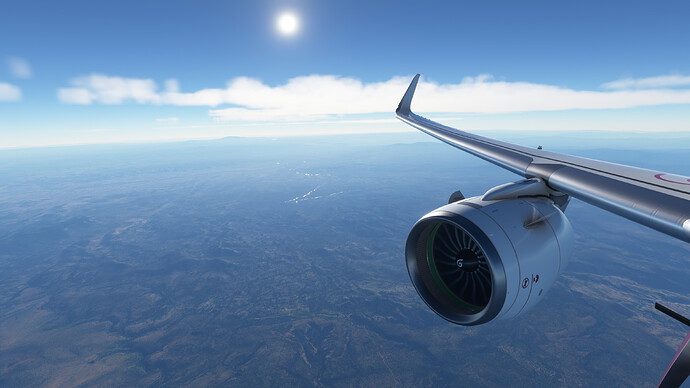 I’m not saying the updates don’t change things, but it’s very rare that I’m seeing the issues that some other people are.

In other news: guy who edited the user.cfg to exceed the graphics settings reports no issues.

You are missing the point. The complaint is that for regular mortals which have lesser systems, Asobo seems to be changing the threshold at which LOD downgrades the textures. What was LOD 100 before appears to be close to LOD 150 now. Or, the LOD slides behaves the same, but the differences between each lower texture “pack” are more marked and therefore the terrain looks like an oil panting from altitude.

Clearly if you set your LOD to 200 or more you will only see the highest quality textures at all times.

This setting certainly needs a lot more attention although it has a high performance impact on my system when flying low I just manually set to 200 if I am flying above 20000ft.
Curious to how they will tweak this setting on XBOX. Time will tell

It will be interesting to see whether they fix this before the console version is released.