I was in Vegas yesterday and at ground level it was just blobs. Turn it off and you have basic buildings again.

No, it‘s not. It is clearly a streaming issue. That‘s another issue. As explained above.

Does that not constitute to be broken? I.e not working as it should?

Does that not constitute to be broken?

If you mean the photogrammetry itself: no. It is the streaming thereof which - for some - does not work.

A “vote” hardly qualifies as an instruction, but whatever. I suggest you stop lecturing people here, which really serves no point. Many people have been exchanging the tips you mention already. I guess this acknowledgment of Asobo is better than nothing, even if it predates the last update !
So, ok, it’s a streaming issue, but the result IS bad PG. And ultimately, regardless of the cause, the game ISN’T working as it should.
PS: and FYI, I had already voted etc, which doesn’t prevent me and others to seek possible workaround etc, since, as you say yourself, it does work better for others…

Lol what a plane is this? Looks cute

So, ok, it’s a streaming issue, but the result IS bad PG. And ultimately, regardless of the cause, the game ISN’T working as it should.

Bad PG is also a result of bad photography. If you would look around in Frankfurt, Hamburg or Copenhagen, or many places in Paris, you see how nice good PG can look. Some cities… big cities… just have bad material. Or material that MS/Asobo/Bing could not aquire.

Your statement implies every PG failure is MSFS “the game” to blame. That is not the case. MSFS depends on all kinds of data, work thousands of people are involved in. At the last update (WU-6) we found updates for every previous world update in CM. Check it out. New York photogrammetry improved with WU-6 also. These updates are connections… scale adjustments to new data we download from servers, when we get there.

Things are on the move. Tip: Clear your running cache and switch it off, if you don’t want to run into surprises… things are changing atm. London will be updated eventually… Vienna and Amsterdam too.

Funny, looks a bit apocalyptic to me, those buildings

Haha yeah, the google maps data was fetched in highest possible resolution. A direct comparison ingame vs. google maps shows it’s really the same quality.
But compared to the generic buildings without the import it gives you a somewhat “familiar” feeling when looking at it from let’s say the runway… at least for me as a local.
You can see all the “highlights” of EDDN, the tower, the sun terrace, the parking lots and buildings, even the “Airport Nürnberg” lettering at the terminal. As long as you dont look from too close distance it’s kind of convincing

Yet i still hope they one day will bring that airport directly into the marketplace.

Depends on your performance. When you use cache only to max out FpS, the cure is worse than the disease. Around updates (like now) cache can cause CTD’s, read the other topic…

If you ask me that has everything to do with addon scenery possibly stored on slow HDD… And to be quite honest I can’t see how disabling caches would fix things without a big hang as it loads (still I suppose that’s better than a CTD).

Several posts were were removed from this topic. A notice was placed hours earlier:

The quality of photogrammetry has taken a real turn for the worst. Just in Basel this morning and my word it’s bad. 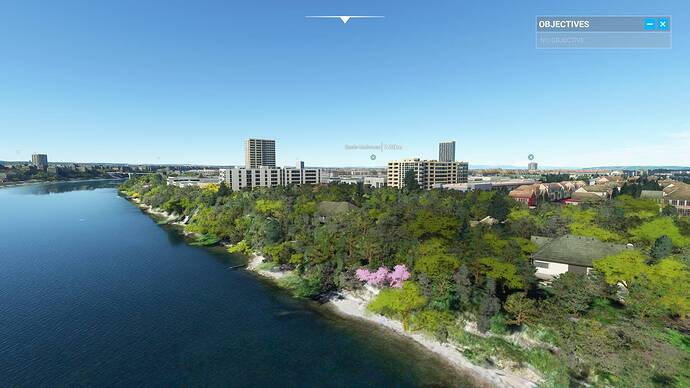 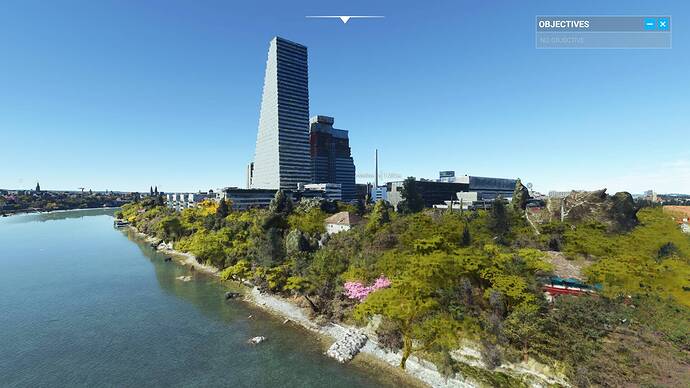 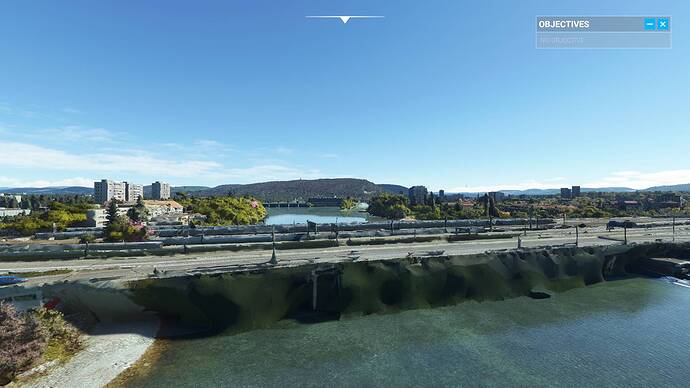 Is this what is being looked at in upcoming updates?

I have the Gaya LOWW airport which also includes the refinery so I cannot compare (btw: anyone knows if its still possible to prioritize scenerys like in the old scenery library?)
But generally the PG (or rather the satellites) has problems with thin structures like cranes and pipes which are quite common in refineries

What you have posted as pictures with photogrammatry on is I think normal when the PC can’t handle the load fast enough.

It happens to me also in other places like New York for instance, but once you keep flying around while looking the other way it may happen that by the time you look back every building has been rendered then properly.

So we may assume it to be perhaps a rendering problem in relation to the strength of the PC the sim is running on, and not so much the quality of the photogrammetry itself that could be very well showing perfect on the newest high end computers like Dell’s Alienware ones for instance.

At least that is how I witnessed it recently with a building at Zurich lake that wasn’t yet rendered fully yet, and much more like your pics do show, but flew a bit around without looking at it and by the time I was to fly over it, it was pictured in all its glory quite very beautiful.

And yes, my laptop is a Dell Alienware, but still of about six years old.

So guess what a brand new one would be capable of today probably causing no problems at all then maybe.

I don’t think these textures are a rendering thing, before taking the captures I have been around the area for a long time and the refinery has always been like this, it does not look good because there is some error on the server, in my connection or where be.
My pc is new and I think it is quite powerful
AMD RYZEN 7 3700
RTX 2070 SUPER
ROG STRIX X-570-E GAMING
1 TB SSD
Samsung Odyssey g-sync 240 Hz monitor 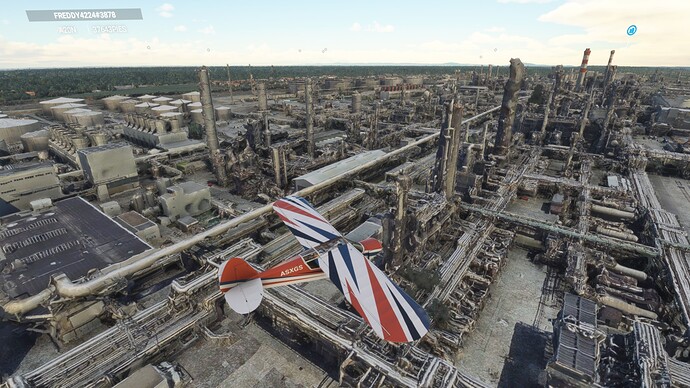 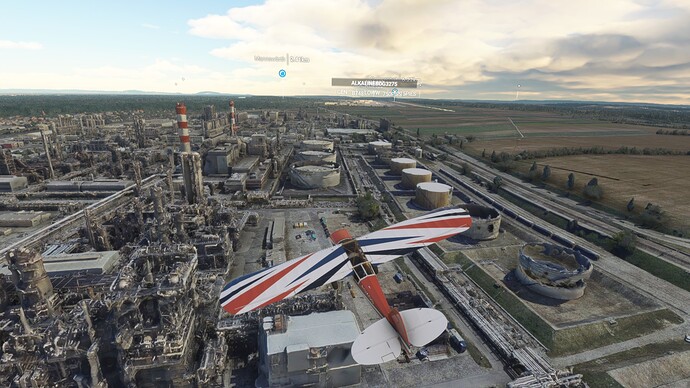 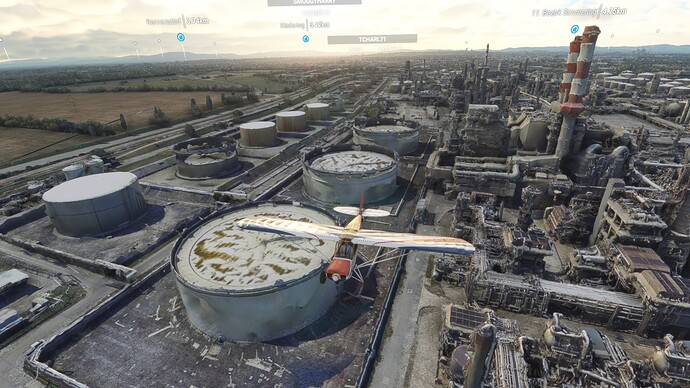 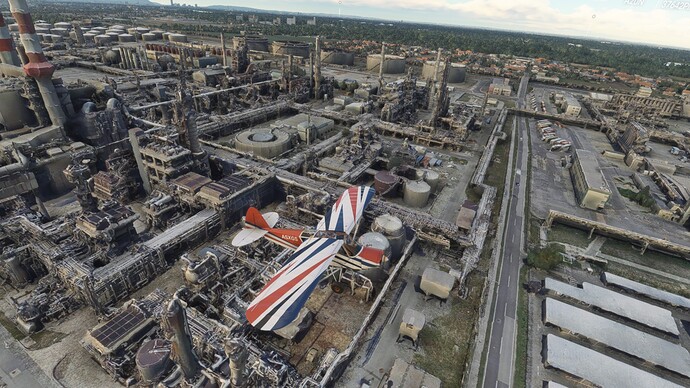 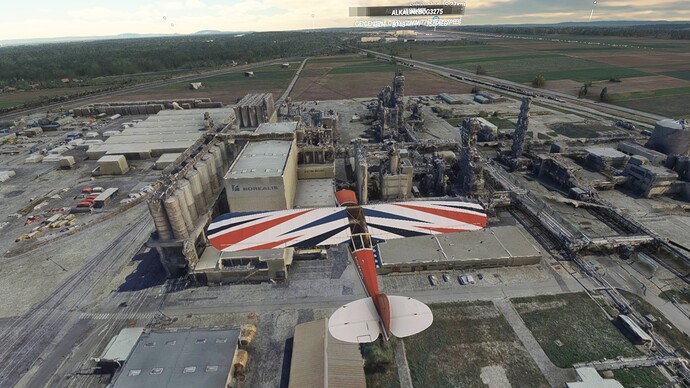 Yes I saw that it’s very bad. but I flew myself recently over Vienna for quite some time and I can’t say that it looks good. Albeit based on your pics is at least 10 times better.

And there are two trains running at the airport, Wow.

It’s therefore that I was thinking on the rendering because when flying over let say Chicago which is with me the ORBX add-on, then it is perfect, while the rendering of the MSFS scenery beyond downtown Chicago has a difficulty in getting rendered fully by the time I get there. And this also depending on how long I’m already flying in the sim.

At the same time you see buildings or mountains adjust themselves the closer you get to them till they become a perfect view as it should be, though in large cities there are problems. What I noticed by accident in Chicago is that you can fly through the buildings of the add-on. And I presume that this is done so that there’s less load time needed so to not strain whatever PC type too much.

And when I fly in Florida in the vincinity of Trump’s golf course, then when you do so from the closest airport where the President landed with Air Force One, then the trees aren’t rendering equally fast enough as well as a few buildings.

It’s again therefore that I go in the direction as said due that the view is exactly the same, especially in bigger cities.

The same thing you got with the old FSX as well as the newer P3D of Lockheed Martin with bigger cities or when flying too fast that you begot mostly a blurred landscape or when closing in on a big city so much stuttering that the sim became unflyable. And now we have no blurries and no stuttering, then a somewhat bad view due perhaps the same problem, though a different outcome.