Terrible Night Lighting after patch 5 - 466 votes already - Are you reconsidering night lighting in future updates and how can the community further help you?

Night lighting has been changing since release through many different iterations. However it seems the last updates have not only reduced the intended effect but have also introduced some distracting and visible bugs. By the time update #5 was released, the deliverables were departing from what was announced and they are still not representing night lighting in the most credible way.

In order to help you with the 2nd question, I’d like to shed some light (pun intended):

Although there seem to be many divergent opinion on night lighting in the simulator, a focus and dedicated group has been debating, analyzing and making suggestions based on real pilot point of views and experience. This group is mostly participating in a main discussion which has more than 466 votes right now, and there seem to be some consensus on night lighting not only in terms of representation and implementation ideas but also around a handful of prominent figures in the community. Because the discussion is very long I’m trying to point to the most recent and relevant material below.

Here are two excerpts which are illustrating in my opinion the most salient points:

but with changes to light-placement logic, sepiamask-reduction, brightness & lampbulb texture scaling we will for sure bring back the beauty of night flying, as well as making it much more realistic than before. It’s a simulator after all. Realistic properties first, and then tune for beauty from that.

I agree, and has seen from the many comments and screenshots supporting this, I believe restoring point lights as in pre-release but adding Black Marble texture only in the distance, would be a first step in a good direction at minimal refactoring and implementation cost (development wise).

Take a few steps back to get started

Some observations with real life material

I’d also suggest you follow the posts of @Grinde81 in this discussion and others (I’m sorry if I’m missing someone else). He is really prolific with the night lighting discussion and he is bringing lots of ideas. Just by looking at the likes and answers they must be good ideas.

Absolutely concur with paying special attention to @Grinde81’s posts, he’s put a lot of good thought into the issue. I’d also add looking at whatever bug is resulting in duplicated (or even quadrupled) light objects occurring along some roads at differing elevations above the surface. That alone would help some, and improve performance from not needing to draw so many.

Thanks pointing this out. I’ve tried to repeat the same as you in the other Q&A thread I just noticed here related to lighting in the hopes that some more specific questions will be asked instead of something like this:

“some users say lighting is still broken, will you fix this?”

“it is a work in progress, so yes, many updates to come”

^^^ That sort of back-and-fourth isn’t really furthering the conversation at all.

The last dev Q&A answer had some really good details, but didn’t touch on much of anything that @Grinde81 has talked about, which hopefully can be rectified by having better questions asked.

I think the lighting is a step forward, but in all aspects should be reverted to Alpha night lighting with maybe making the ground a bit darker. The new one has the ground+sky much darker, which is good, but lights are too uniform and rural areas feel artificial.

Yes, this has to be looked at. The original night lighting was pretty good and realistic in VFR. Could improve, yes, but it surprised me when they came with a “fix” for something that was arguably not broken. I’m not sure why they departed so radically from the original lighting. What we have now is just appalling - just a computer generated grid of light dots on top of a black background.

I was expecting a fix (roll back) in this next update 7.

Appalling is a good description. When flying in remote areas at night and seeing that grid of light dots on what is a series of unlit dirt roads, it reminds me of Flight Sim 95 with those yellow vector lines representing lit roads at night. How could we have made a 25-year leap backwards with a single update?

If Update 7 doesn’t fix the night lighting, I’m only flying during daylight hours. It’s just painful to see those rural roads at night and totally kills the immersion for me.

A less experienced team working on the sim since release is the only logical explanation.

Two things I think can be improved:

Sebastian from Asobo cleary said in the last Q&A from end of October that they want feedback on the new lighting.
So here it is.

The now nightlighting is a mess.

Please fix all the problems since update 5:

Roll it back to the orginial and fix the problems. The current night lighting is not acceptable.

I would love to hear how Asobo / Microsoft seriously considers this an improvement since it’s clearly a lot worse then the night lighting we had before patch 5. 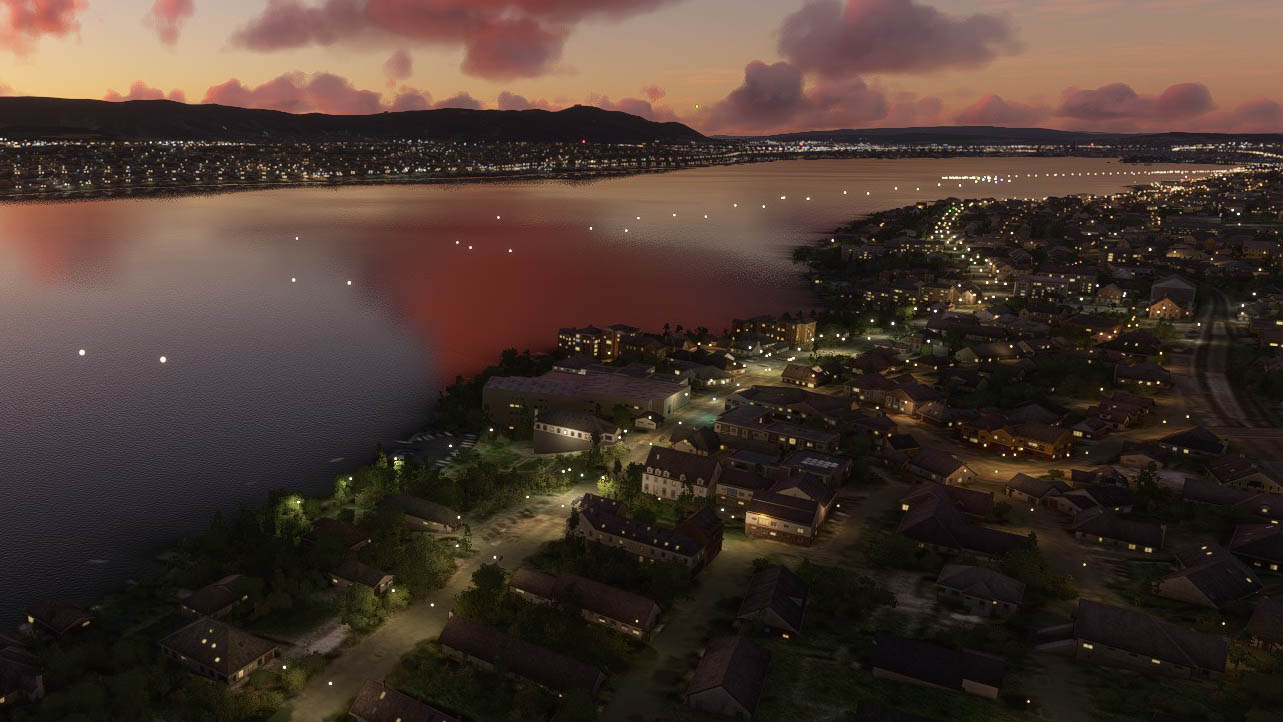 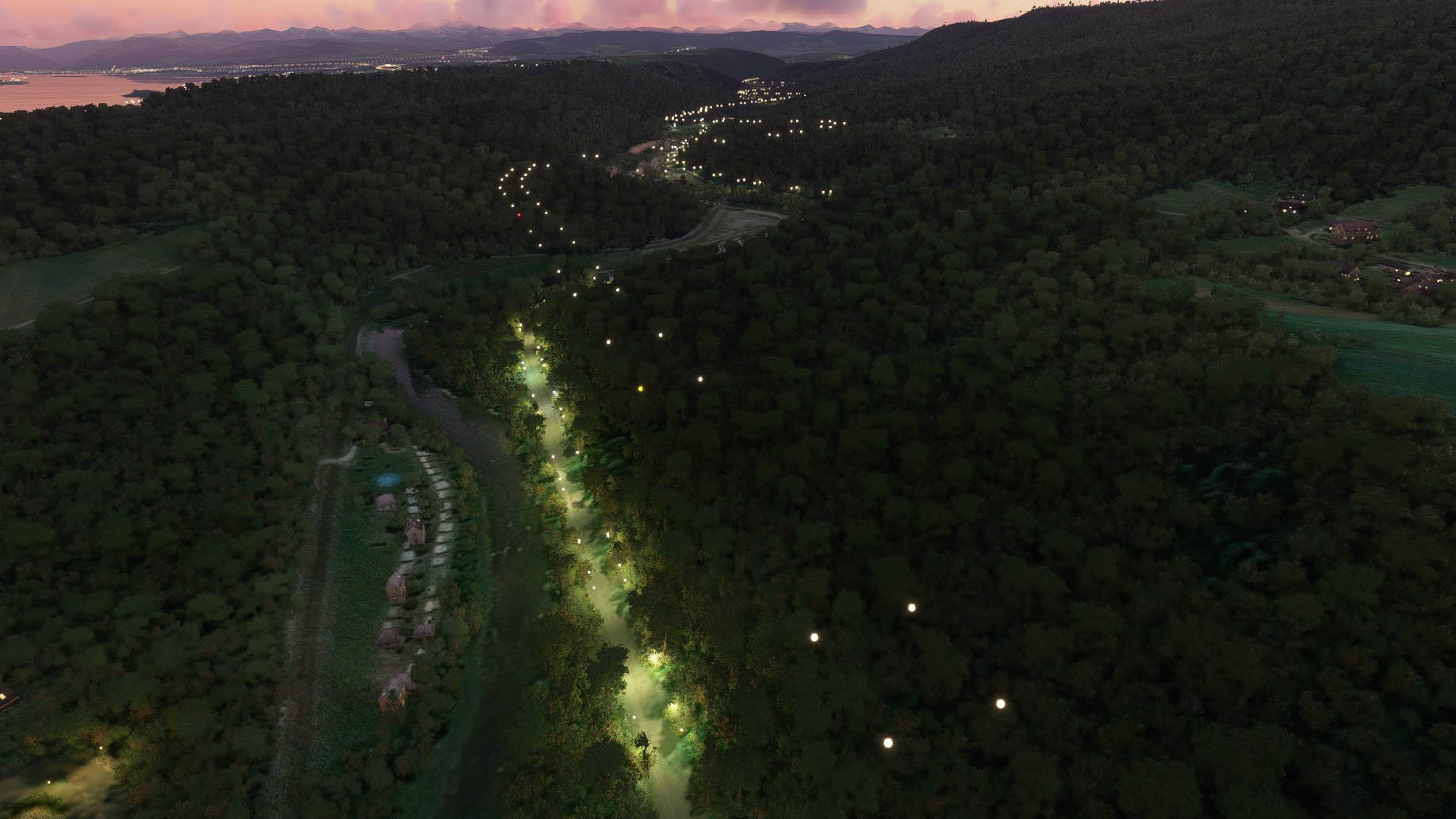 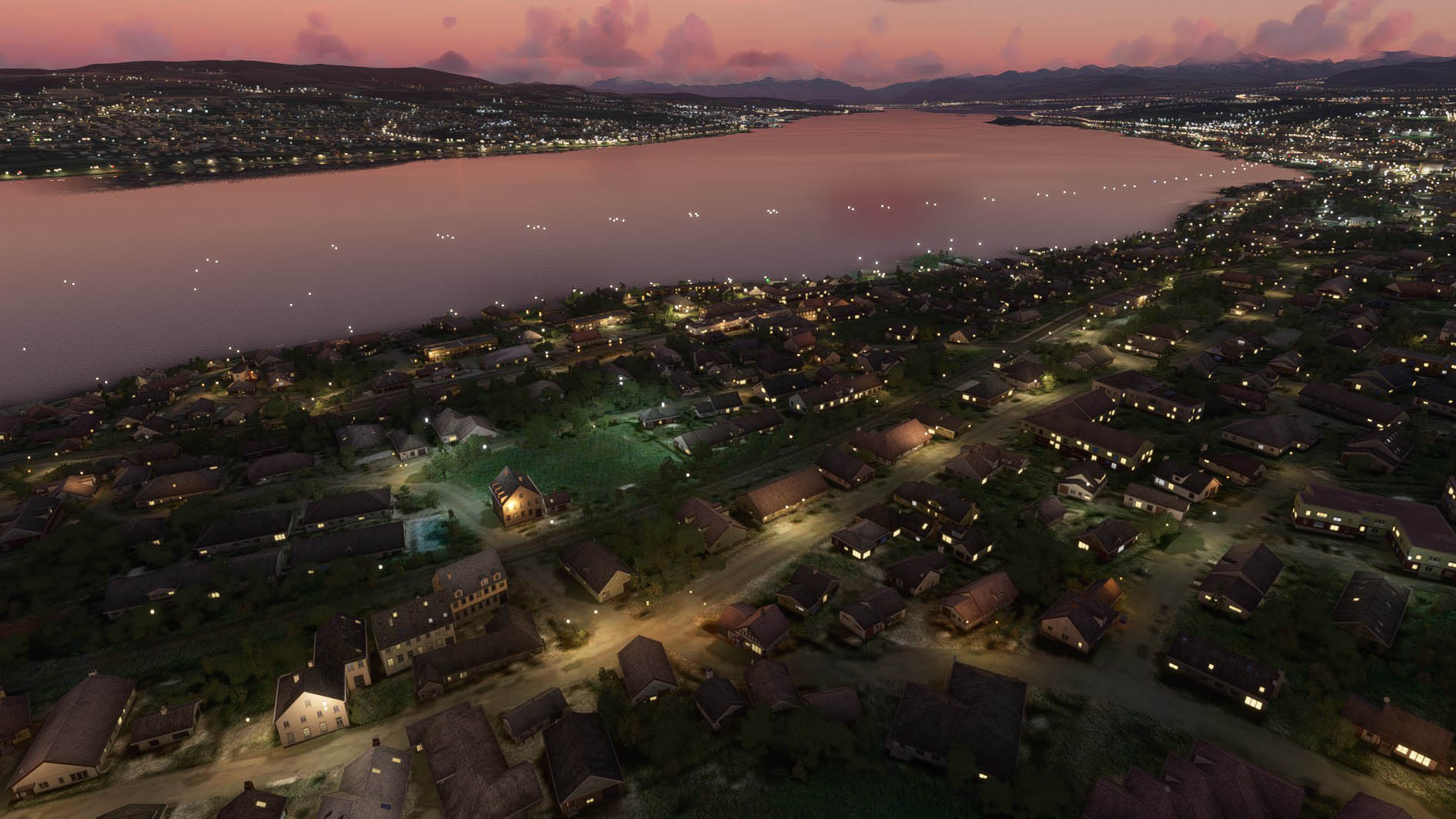 Just some examples of the current mess.

Just some examples of the current mess.

Thank you for posting this, I also believe Sebastien said to not only tell them what is wrong, but anytime you’re posting a screenshot for illustration also posting before/after screenshots for comparison, like the following examples. Otherwise it makes it probably hard for them to differentiate personal preferences and rant vs factual problem.

PS: for those not knowing the discussion these 2 examples are coming from, I’d suggest you do click the links and read the explanations and comments which are detailing the problems they are illustrating and the possible remedies the community is discussing about. 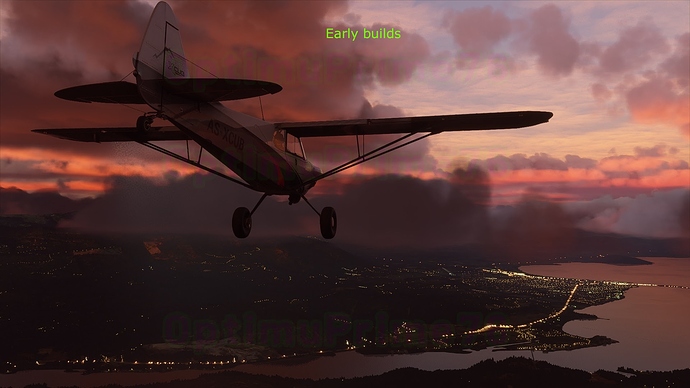 Release version many is saying was “perfect”,
The the severely reduced lamp visibility is painfully obvious. 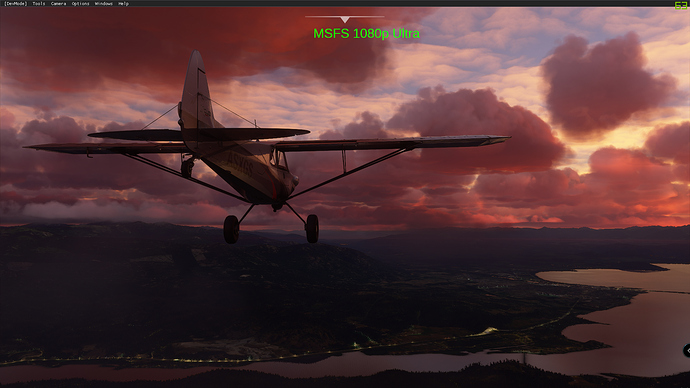 Hard to take screenshots of how it looked better before when we can’t roll back updates our selfs ;).
I did not take screenshots of every possible aspekt of the sim ;).
I did not of the night lights since I was not expecting them to break it. Why would I?
So I can only show what is wrong now. I can’t show how it was before.
It also does not really matter. They know it themselfs.
And obviously my screenshots of the current state speak for themselfs.
Furthermore, this post contains links to the other topics where this has been discussed since update 5, there are many votes and lots of screenshots.

Furthermore, this post contains links to the other topics where this has been discussed since update 5, there are many votes and lots of screenshots.

Including yours here and thank you for helping illustrating these bugs introduced in the latest update(s). These are also representative of some of the underlying night lighting implementation flaws.

All in all I believe the main point of the Terrible night lighting after patch 5 discussion from the get go is not about sporadic bugs introduced with new updates which they are certainly aware of, but it is most about design and creative decisions in the choice of fundamental choices of techniques to make night lighting plausible and realistic to a trained pilot eye.

Hard to take screenshots of how it looked better before when we can’t roll back updates our selfs ;).

Dont shoot the messenger! I’m just trying to remind what he did say because no one, at least the 466 voters of the original discussion, would like this Q&A topic be discarded only because when quickly glancing at the content they just read rants and no comparison like they’ve asked for.

I did not take screenshots of every possible aspekt of the sim ;).

I didn’t either and for this reason:
I’ve posted there is a source of information which could be readily exploited

And there is much more publicly available but you’d have to scout for them.

Here are a few examples of publicly released pre-release screenshots: 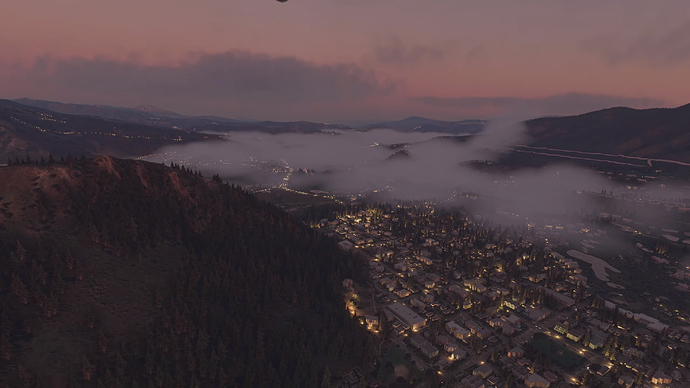 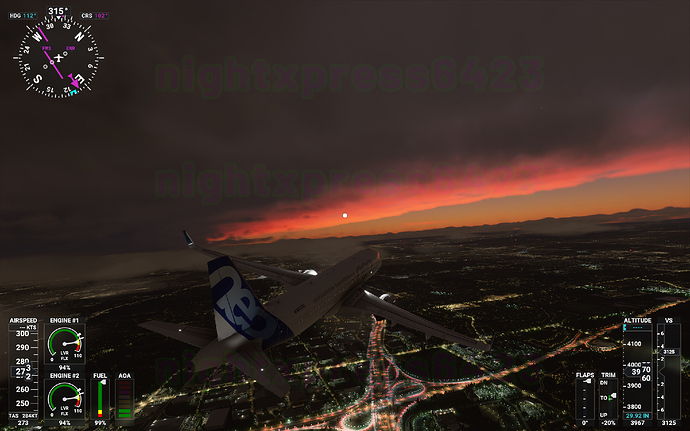 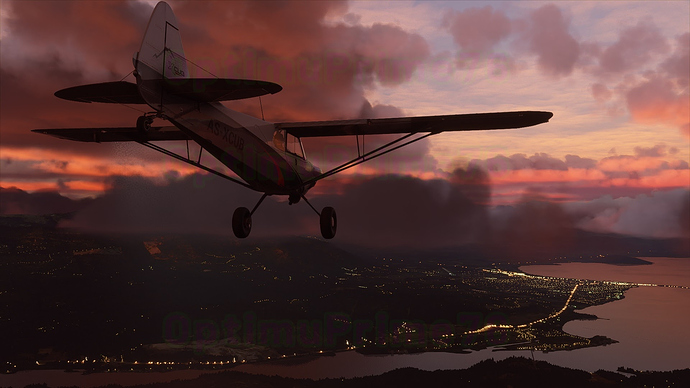 Why there is no twinkle light, like in the real life, FS 2002 had this effect. Maybe One Day. Surprised nobody post on it, i believe…

Art: The little lights aren’t twinkling.
Clark: I know Art. And thanks for noticing.

I’ve been flying in this sim since the day it was released and this evening was the first time I’ve tried any night flying. As you guys are aware it is pretty disappointing. I’ve seen plenty of videos and screenshots of night flying in earlier versions and it always looked great. So when I flew across the Delaware bay into South Jersey I was pretty shocked to see an area that is mostly wooded with a few county roads cutting through it IRL looking like a spiderweb of interstate highways.

I read through some of the posts in one of the other threads and there are some that defend the changes saying the lights look better but I do not agree. All lights are the same brightness and color. No way can I believe that’s realistic.

Another point that I’m not sure has been referenced is that most of these lights (in my specific scenario) if they did exist IRL, still wouldn’t be visible because the wooded areas surrounding those roads have trees that are twice as tall as the street lights. So in reality you would only see lights on a road directly below and parallel to your line of sight. Obviously this is a very complex problem that I don’t have the ability to solve but hopefully some on the developer’s team does.

This is the first flight sim where I now have to arrange my flights so I don’t have to fly at night and witness the garbage lighting. I was mostly happy with night lighting on release, only issues were a few country highways would have streetlights. Now every road has lights, and not just normal lights, quadruple lights every hundred feet.

The fact that they need before and after screenshots to see what the problem is and can’t see any problems with their own eyes is a bit alarming.

I agree, the early alpha build (before the sepia) were awesome… how can we bring those back and then use as a starting point for other improvements!