Thanks for delivering an arcade scenery flying product

But the question is… Is it really the flight model or just the aircraft. If your pilot friend isn’t a developer that knows how the “insides” of a software work I don’t see how he can honestly make that assessment.

The person that claims to be a 747 pilot here that agrees with me is not my friend & i don’t know him. That proves how neutral the general opinion on this product.

I can’t comment on the 747. The only reference I have is PMDG, but since that can be off as well to some degree I have no place in judging the 747. I can assess the C172 though and that seems pretty well done. Is it an inaccurate C172 on an inaccurate flight model that somehow hit the lucky spot of appearing fairly accurate?

I got real life pilot responding to this thread as well. Instead of asking me you should ask him what’s wrong with the flying model in a more specific manner.

Indeed, you got real pilots responding. I’m one of them.

All you’re doing is complaining and desiring an audiance. Why is your opinion valid and those who disagree with you not?

Not happy? Don’t play the game. You even stated you didn’t pay for it so I’m not sure why you’re complaing.

I would like to remind everyone that discussion of moderation is not allowed.

To maintain the environment of the forums, it’s absolutely necessary that the moderators can do their jobs effectively. To facilitate this, any discussion of disciplinary action or moderation is not allowed, and circumventing suspensions by posting on another account or having another user post on your behalf is also not allowed. This includes posting any chat logs or email correspondence between a player and a Customer Support Agent, Community Manager, moderator, administrator, or any member of Microsoft Flight Simulator staff.

If you have a problem with a moderator or feel you are being treated unfairly, please contact us at support@flightsimulator.zendesk.com

The discussion of the Alpha and Beta testing phases is also prohibited as the NDA is still in place, for more information please see: NDA Reminder for Alpha/Beta Testers

But if the airplane doesn’t feel like i am flying an airliner then it’s not a simulator.

Yes. As I told you before, it is likely that the problem sits in front of the simulator, using the simulator wrong. If airliners should feel like flying an airliner you need to use powered full-size flight controls. Preferably with a motion platform, but that just creates illusions and isn’t realistic at all. The flight controls might be. Oh wait, you’re using a stick or consumer yoke? Then you can’t judge.

And the way it all menus look in the game… it so much arcade. No simulation feel AT ALL!

Yeah right Boeing pilot, I’m sure you’d prefer the actual Boeing simulator menus. They are much more intuitive for sure (Look! This one even has TWO cloud layers!). Not arcade at all. Oh wait maybe they are, if you thing back a few decades. 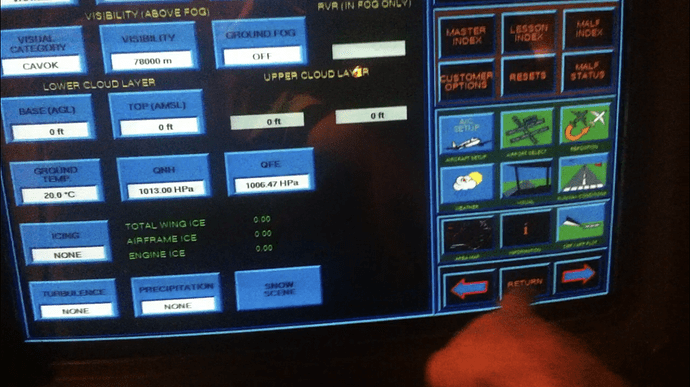 Now we’ve finally got a modern UI built from scratch for this sim, ignoring many flaws of previous versions, introducing sensible features and people still complain. It’s not perfect and many things may (should) be improved, but it’s the way to go.

On the airliner with overspeed warning. I can safely say that you left your flaps on too long, that’s why you got the warning.

Day and night on my side.
When you move airliners flight control surfaces, you really feel how heavy they are, not like other FS, really don’t know what you mean by there is no difference.
I’m not saying with this that they matches the real thing. (Would you expect that on default aircraft?)
But there’s big difference on my side at least how it feels hand flying them.
Having said that, there are still some specific FM weird things that sems to be shared between all aircraft in some flight conditions (like pitch bouncing/oscillations), that needs to be fixed, and they are already working on it.
But far far away from your experience for sure.

Yeah right Boeing pilot, I’m sure you’d prefer the actual Boeing simulator menus. They are much more intuitive for sure (Look! This one even has TWO cloud layers!). Not arcade at all. Oh wait maybe they are, if you thing back a few decades.

Exactly! Thanks for sharing the screenshot of that Mickey Mouse professional GUI. Some people are just clueless.

I like very much the way you think, thank you for your optimism. I hope it won’t take too long, as autopilot and taxiways accuracy are quite needed to fly online properly on VATSIM.

People who complain about MSFS in terms of realism honestly have no idea just how bad its predecessor, FSX, was when it first released. It was almost unplayable with the bugs and performance issues until the first expansion pack, Acceleration. The FSX default aircraft all looked and flew like trash compared to this. I’m glad that the MSFS default aircraft aren’t completely terrible, and to be honest they’re quite flyable indeed. And the 3D scanning tech Asobo used make them look fantastic, surprisingly better than addon developers like Carenado.

The default aircraft are made for the casual gamer, not real pilots. With FSX I practically never flew the default aircraft, in fact I stuck to FS2004 (aka FS9) for years until the bugs in FSX were fixed, and some decent 3rd-party addons came along. The same thing will happen to MSFS - If you want the best flight model realism you’ll need to wait a few months to a year for some decent 3rd-party addons.

Hello everyone, thank you for sharing your feedback.

I’d like to raise your attention to the level of assistance the sim is bringing. Please check how the assistance settings are set. The “easy” mode will prevent you from getting the “real” experience you are looking for.
It doesn’t mean that “easy” mode is to avoid, it just depends on your experience with simulators.

If you feel that you still not have the experience your are looking for, please send us your feedback. The team will continue to improve the sim.

Terrible post. So wrong on so many levels. This is a platform that enables simulation. It offers the basics. What is FSX worth without study level addons?

As a platform this is the most we have ever gotten.

Well said. Personally I don’t mind if the stock a/c are amazing or not. Even not so much the airports, those can be fixed.
The platform is the real thing that needs utmost attention and needs to have rock solid core features. That’s the area that should be improved before anything else. It’s a lot easier to get another great aircraft into the sim than a new weather engine, ATC, aerodynamics or whatever you can think of.

Hello,
I believed we actually did that during alpha & beta tests. But you people seems ignored us. It’s not something as easy as fixing a broken button. I will say again. If you are to impress & i quote “The old pro sim community” your product needs a complete overhaul of the flight model. But if your only targetted audience is new people who just run after eye candy stuff. Then your product perfectly fits that position.

Where is the glider and helicopter physics ? It’s as much of a physics simulator as is Mario Cart.

The flight dynamics is all wrong. Even for small aircraft. After take off the airplane bounces off like a toy.

I have over 500 hours flying GA aircraft, including over 100 hours in the 150/152 series. I also have an engineering background and know how to test things methodically.

I strongly disagree that the flight model is “all wrong”. On my first flight with the 152, I spent almost 2 hours doing all the standard maneuvers a student pilot would have to demonstrate on a private pilot check ride, or that an experienced pilot would practice before a biennial flight review. I know exactly how a real 152 flies in these scenarios.

I did standard takeoffs, and short and soft field takeoffs. Climbs at Vx (best angle) and Vy (best rate), looking for the pitch angle and speeds that resulted.

In level flight, at a constant power setting, I tested the aerodynamic effects of extending and retracting flaps.

I did multiple touch and go landings, including standard, short field and soft field approaches.

I set up a crosswind in the weather dialog and did several crosswind landings, including the “kicking out the crab” technique and the “forward slip” technique.

I found the performance of the flight model to be surprisingly accurate in almost every regard. Much better than I expected for a default aircraft. My main complaint is that the aircraft descends too steeply if pulling power back to idle from level flight with “hands off” the yoke, and the operation of the mixture control is not realistic at all in any piston engine aircraft in MSFS at the moment.

I did the same series of tests in the 172, and had similar good results, with the exception that the aircraft seems underpowered in climb for the represented 172 model. It acts more like an older high-time 172 with an 0-320 engine, than a newer model with an 0-360.

This thread is about unrealistic implementation etc. What is realism ? 100% real is the real flight of real pilots who have years of training and experience behind them. Weather conditions / aircraft where unpredictable things happen and where you as a pilot have to react accordingly. I am a flight simulator enthusiast and 100% aware that a software can only simulate such a feeling to a limited extent. But with MSFS2020 I can fly to places I have never seen in my life. I fly with airplanes that I can never afford and will never have. MSFS is just at the beginning of a long development and I believe that it will be good and I will support MS ASOBE ( PMDG ,Majestics, FSLab …they will also come )
But my basic principle is one, I want to enjoy and have fun