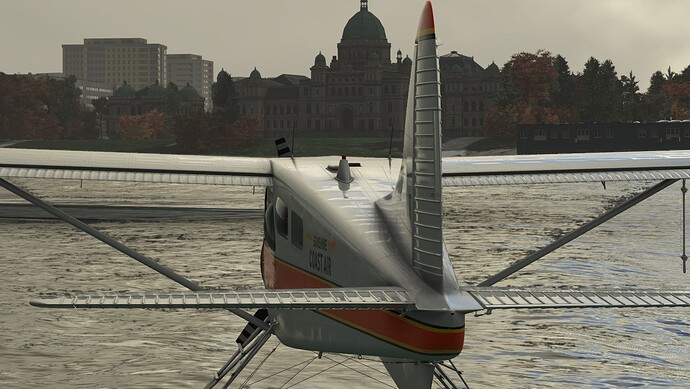 Is there a ‘no props’ mod for the Beaver please.

This is simple and works perfectly

Which scenery add-on is this?

I’m an Xbox user. I don’t have that luxury. I just have to hope that devs program the quickview buttons correctly. Which is surprisingly a lot to ask for.

Thanks for the link.

So there is no way of leaning with any kind of logic? Right now I’m just guessing that leaning halfway is about right for cruise but it’s probably far from optimal.

So there is no way of leaning with any kind of logic?

This is very sad. Such beautifully crafted addon limited for this kind of basic things. The DC3 is even worse. Really sad.

I leaned according to an external EGT gauge at standard atmosphere. 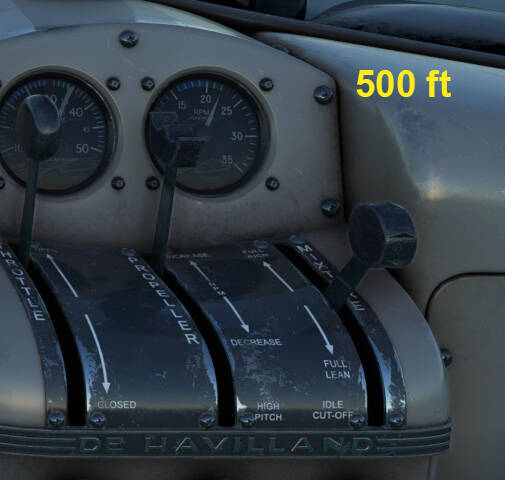 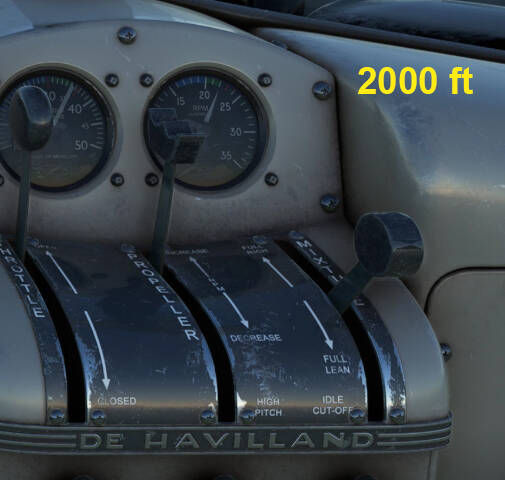 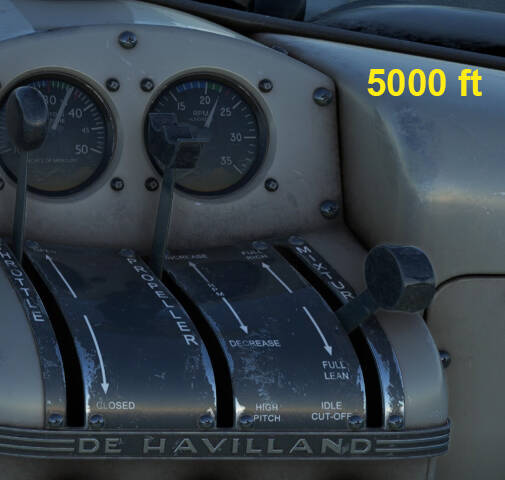 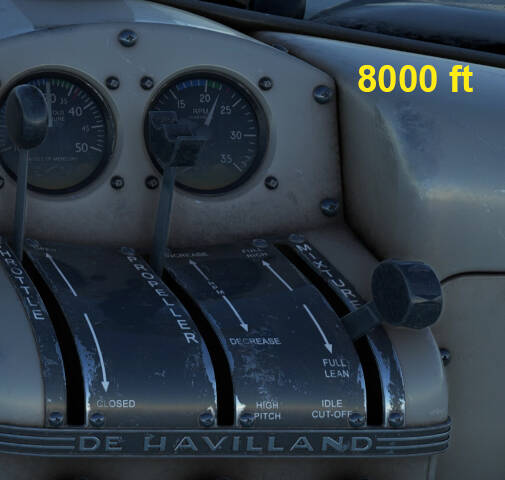 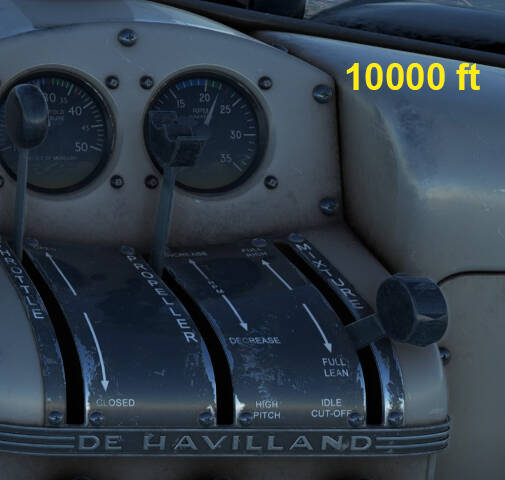 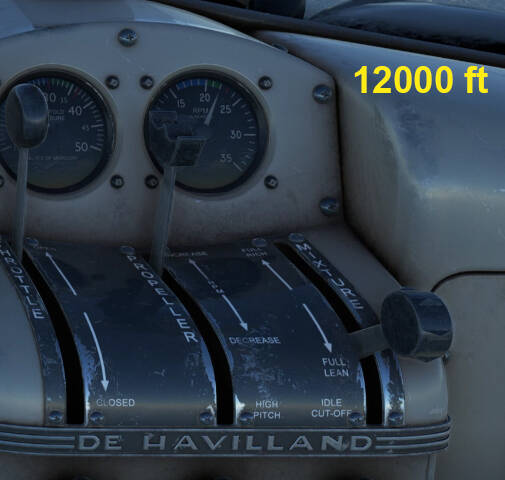 Maybe a skilled texturing modder could create some marks on the throttle (as if it was made by our virtual persona) helping us to identify those points. Although I think those positions will depend on the temperature too, isn’t?

Yes, I did it at standard atmosphere. It’s a rough hint.

Interesting Rube Goldberg device on this mixture lever. Doesn’t look like a DHC-2, but it’s a DHC. Maybe to prevent vibration from moving the mixture lever, or to keep it on auto-lean unless explicitly needing to lower it to cut-off? 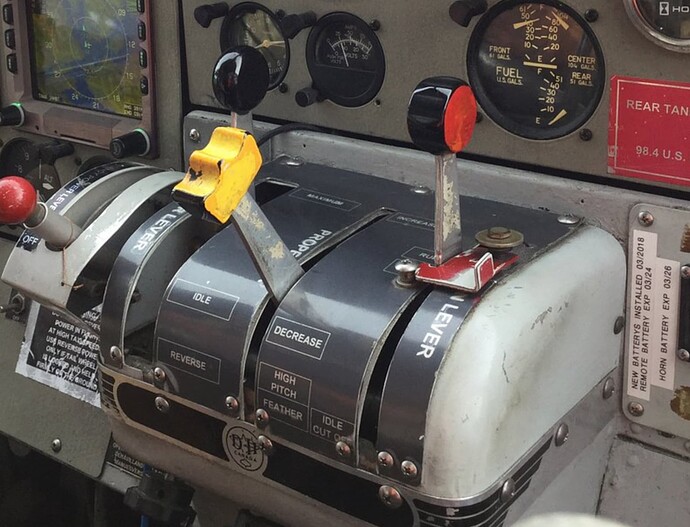 You can see under the red gate it say -n lever, I’m thinking that’s “condition” and this is from a turboprop. The other clue being that the throttle lever has reverse.

Ouch! That must be most annoying. We can only hope they fix it soon.

New here but it seems to be the most active MSFS Beaver thread on the net.

I did a simple edit to the Got Friends flight_model.cfg and installed the wing tip tanks to the Bush version of the Beaver. At the moment when the tip tanks are full it automatically feeds into the forward tank. In the real thing you have a lever switch located on the wing root that you turn and it will then gravity feed into the forward tank on the pilots command. However adding a physical switch is beyond my MSFS skill level but I hope Got Friends does the mod in the future. Looking at the mapping for the fuel tanks its certainly possible!

Problem is at first I thought the flight_model.cfg in the Got Friends Bush version carried over to the other Beaver models but apparently it does not. So edits made in the Bush version conveniently located in the Community folder don’t carry over to the float and wheel versions.

Problem is I can’t locate the core Asobo/Blackbird Beaver files. Any idea where they are located? Suggestions for finding default aircraft files on other forums ended up just being a wild goose chase. I don’t think they are encrypted so they must be hiding somewhere.

Up next is the infamous and rare external belly tank. However in order to really do it right you need the tank to be physically modeled. I hope Got Friends can do this in time!

Problem is I can’t locate the core Asobo/Blackbird Beaver files. Any idea where they are located? Suggestions for finding default aircraft files on other forums ended up just being a wild goose chase. I don’t think they are encrypted so they must be hiding somewhere.

They are located here. All you need to know to find it is where you installed Flight Simulator. Replace OneStore with Steam if you have the Steam version:

Thanks that worked and easier then I thought. I have not done much editing in MSFS. In fact this is the first time I dived into any editing in MSFS but did it all the time in previous MS flight simulators.

Still got more work to do. During a test flight today it was pulling fine from the left tip tank but not the right for some reason. When I went into the mapping trying to fix it the engine now just stalls anytime the Front tank is selected. Everything looks correct but its possible you are limited to 2 tanks feeding one system sort of deal.

I think someone more skilled then me could likely figure this out but for me its going to take a lot of trial and error. I basically have to look at planes that do have this working and this trying to translate it into how Blackbird has it set up.

Now that I found the float model I want to dig in and see if I can greatly increase the water drag (if possible). For Seaplanes until you get up on plane things are kind of slow going. I doubt the current water modeling in MSFS will allow any improvement but will see if I can tinker with it for the better.