The absolute state of London

Hmm. sounds like a possibility. But i never fly with rolling cache on and i also never use a manual cache or anything (tried it one, to much hassle, gave me same results as without) and i never experienced those issues. (only when i was using lesser ram 16gb)

I’m on a 250mbps connection btw. Lan no wifi. But sure 80mbps should be more then enough to download fast enough to reach highest quality by the time you get at the closest LOD range of the photogrammetry?

I’ve got similar issues. 100gb internet but get a warning that my bandwidth is too low. It’s got to be something be on their side…
No data limit, no rolling cache. 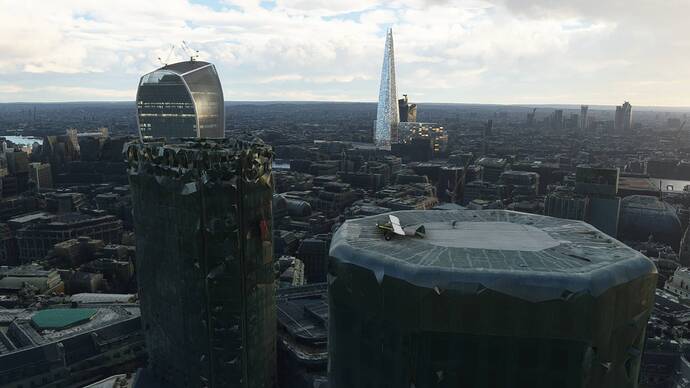 same thing in montpellier, bordeaux, lille. in fact on all photometric scenes.

Running at 1440p, getting 30fps with mostly high-end, clouds on ultra.

Internet is FTTP 360Mbs UP and 180 Down connection but getting 370Mbs and 210Mbs respectively.

I am UK based

All photogrammetry is melted for me, no matter how long I stay in one place, I have good steady internet, an RTX 3080, i9 9900k, 64gig 3200 ram, and a 1tb nvme. I have tried various resolutions and detail levels, but it still looks like an apocalyptic disaster movie. Oh and I have tried at different times of the day too, to try and avoid heavy server load. UK based. 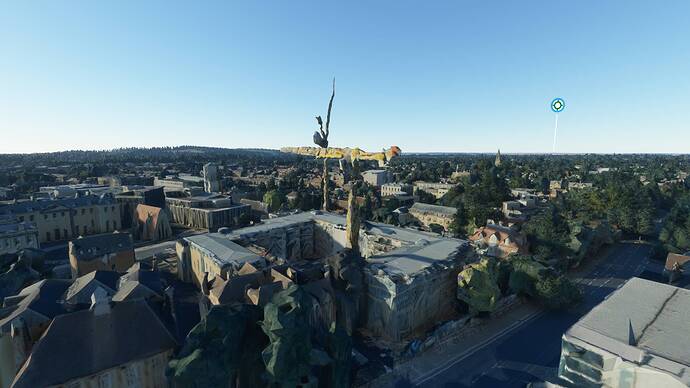 Same experience as Kes1 above. I have a similar pc, 300mbps internet and have cleared cache etc. I never had melted buildings before but today I had them in San Francisco, London, NYC. Nearly every single building looks like it just melted into a brown heap.

I have the exact same experience, the buildings are all melted look like ripped paper and wax. I have a great internet connection and a killer machine. I think it’s server related.

Same here melted buildings on high end system and super fibre inter net on lan.
It’s got to be the servers.

I’ve been flying around London in photogrammetry for a while now and on the whole it looks really great. I’ve got some performance back lowering object level of detail and render scaling and it’s fairly smooth in VR.

The issue seems to be glass buildings screw up the photogrammetry at least with this supplier. There are now a lot of hand crafted models in London and many new ones which have >90% glass facades have been replaced with models - the ones that haven’t look really bad and don’t get any better flying around the same spot.

@Kes1 you screenshot actually looks pretty good. I’m not seeing the melted effect as much but the textures are not great on the side of some of the buildings, maybe the trees have messed that up?

HOW do we turn off-Photogrammetry ??? Would love to do this,…for better Results ?? Still waiting for ORBX to Integrate their LONDON Landmarks Scenery, Should be worth the Wait though…??!

Quick question re: RAM…my Motherboard is quite old and states the fastest RAM as DDR3 2800. I would like to go up from the 16gb I have now but might be changing whole system within a year.
If I buy more modern-faster RAM that is compatible with newer boards will it work in my board but just at reduced speed?
(Board is an is an ASUS Z87-K)

Newer RAM (DDR4) will not work.

Same here. But before you delete the update, maybe consider just switching PG to OFF while flying into London approach. This way it still looks better than before the update and you still benefit from the other additions they made (which I think are quite well done for the most parts).

I also was thinking again of the ORBX add-on, as it is not that expensive. But for now, I just wait if they can improve the PG loading with one of the upcoming patches.

Easy, you can find this under Options > Data (I believe it is called), where you also can enable/disable BING data loading, see your GB used, can adjust rolling / manual cache etc… in the upper half (I think next to BING World data), you should find the option to turn it off.

Also works during flight, but the sim has to reload the scenery which might take a minute or two.

WARNING, do NOT install Orbx London or you’ll run into this…

Found some issues… I cleared cache yesterday, after installing World 3 UK/Ireland and the additional London scenery. Today I did a lot of flights somewhere else, then went to London City to look at the new stuff. Indeed a lot of nice modern buildings… however there seems something wrong with the rest of it. Scenery looks quite bizarre [LondonError] [LondonError2] I took a video of it, looks like bugs running around in London eating everything flat to the ground

Wait for the update… I removed it, but it is still visible in Content Manager. See they repair things.

Maybe that automatic scenery is just inferior with current PC’s. It looks like they used a low base resolution for the textures. and there is noise in the 3d objects.

im to getting melted buildings in london and bristol after the uk update,so ive turned pg off for now,in convinced this is on there side and not ours seeing there a lots of ppl having the same issue and all was ok before this update,hopefully something will get done in the next update

I think for London we should have 2 options in the settings :

Flew around London with the updated ORBX Scenery this evening and also saw this melted buildings issue, don’t have this anywhere else in the world.

Other PG Cities elsewhere on the world have been just fine, I turned off the ORBX scenery but still the same issue, another very annoying immersion breaking issue.