This weekend, we’re exploring the Sierra mountains in the west of Mexico! This area features rugged terrain and a lot of remote bush airstrips. Our flight will include several very short strips - some as short as 700 or 800 feet - so be prepared! The Sierra mountains run almost the full length of Mexico, but some areas have many more airstrips in the sim than others. This region - the northwest of Durango state - is one of them. The route features several canyon runs and steep descents, with a couple of significant climbs as well.

The Bush Divers Invitational: Mexico: Durango, Northwest
Sat 3 September - 1900 UTC (US East server)
Sun 4 September - 0200 UTC (SE Asia server)
Starting at MMJO Mesuga Tortugas
Recommended cruise speed: 120 knots.
To join: just turn up at the starting airport in a suitable aircraft, multiplayer on, name tags on, and join the Discord “The Bush Divers Invitational” voice channel. You can load the flight plan if you like, or just follow the group. 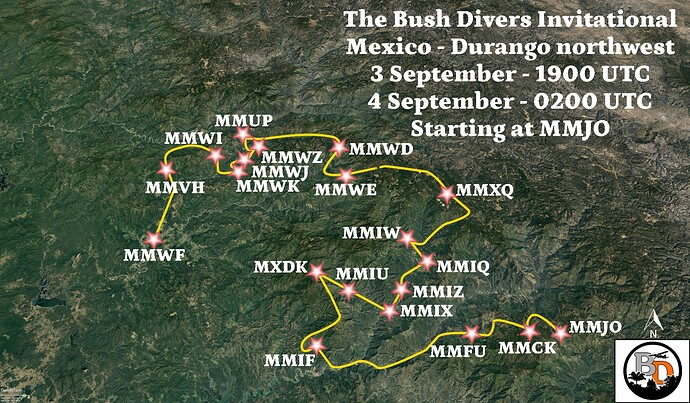 We at Bush Divers are a community of pilots focused on one thing, bush flying! Disregarding the ho-hum of big jets and long runways we opt for the dangers of low and slow flying through rugged terrain and ever-changing weather, landing at the most remote and inhospitable airfields in aviation history.
We Fly To Satisfy!
Check out our In house VA system being developed by one of our own. Check it out at: [Bush Divers Virtual Airline - Bush Divers] (https://fly.bushdivers.com/)

Join us on our Discord Voice channel at: Bush Divers