I’ve seen both an increase and decrease in fps, depending on how I set up my system.

If I just fly without popping out instrument windows, I see an increase of 5-10 fps. I’ve never seen my frame rate so close to 50 fps in MSFS before.

However, if I pop out instrument windows like I typically do for my home cockpit setup, I’ve found that flying in my regular areas, my fps has decreased noticeably. I see decreases up to 10 fps from my regular 30-35 I used to get over PG areas and 35-40 over autogen areas.

However, despite lower frame rates, I see better consistency in frame times when looking at the dev mode counter. The experience seems far smoother despite having a lower frame rate. I landed at KSMO in Los Angeles last night. Typically I’m riding about 20-22 fps over LA. I was doing and it’s a stuttery mess. Last night I was getting about 18 fps over LA, but it was a fairly smooth experience nonetheless.

I basically agree with you on most of the issues, however, not on this following. I really think that taxiway edge light invasion thing in the modified airports is a real game killer.

It wouldn’t be an Asobo update without some glaring bugs that should have been caught with even minimal testing.

They also broke ProjectedMesh which makes a lot of purchased sceneries not working as expected.
And they introduced new items in the scenery process such as groupings of aprons and polys without any notice. And the format of the DevMode scenery editor was greatly changed without instruction as to it’s use… but I’m just nit-picking.

I re-structured the quotes on my post by correcting the codeing, please consider the latest version.

If we’ve learned anything with these upgrades, it’s that different PCs react in wildly different ways to them. Some people can’t even get to the flying state and some are having problems with FPS, but others just fly along happily with no problems at all. And as we all know by now, even with a NASA supercomputer you may not get much improvement, so you can’t pin the problems on lower-end rigs. I think some people need to realize that the problems they’re having are in MOST cases (no, not ALL) due to their own individual hardware or software setup. And that’s even before you consider the the addons!

If I could request anything from Asobo, it would be to create detailed logging that would allow us to address our problems. Armed with a log file, if you were being plagued by CTDs you could send your log to one of the many computer experts on the forum that could examine it and give advice. X-Plane had that, and I know I read dozens of posts where people were having problems, and all they had to do was to post their log file to get help (I know because I was one of them).

With the literally hundreds of different configurations out there, I’m guessing that’s really the only hope for some people.

I’m also surprised Asobo doesn’t have a log reporting feature. If DCS crashes it asks if you want to send a debug report to the developer. Seems a big oversight by them… Valuable metrics to be gained there, versus a user help desk ticket with vague information and little detail.

I agree there is a noticeable decrease in the stuttering, which is a fairly positive thing of the update despite several other broken things again, as always.

Water creeping across the shore cliffs is almost gone now, although I saw it’s still there on some island shores in the Caribbean.

Spikes are also resolved, albeit after one and a half month time.

I’m personally expecting to see a hot fix like patch dropped in by MS/Asobo real soon in order to get rid of the misplaced taxiway edge lights.

I haven’t had much flying time in the last couple of days unfortunately. I had to work late on patch day. Then it took me 5.5 hours to download the update after I got home. But the time it was ready, it was bed time. Had other stuff to take care of last night, so I only got a couple of short flights in. My observations are based on that.

Tonight I should have time to explore the world a bit more and see if the spikes and bad water edge masking that got broke in the last patch are fixed in my area.

I honestly don’t see them issuing a hotfix unless it’s for a patch that prevents the sim from running at all for a large number of folks. They tend to be very averse to doing that unless it’s an absolute emergency, and I don’t see them considering a visual glitch to be important. They made us wait 7 weeks with spikes all over the globe. I don’t see this problem as being more important than that.

I can no longer read this standard answer … it sucks

I’ve always had a decrease in framerate, before and after update, when popping-out instrument/map windows. I don’t even bother anymore (pop-out windows) as it’s not worth the performance hit. I now use Sim Dashboard on an Android tablet for instruments and buttons outside of MSFS, this method doesn’t consume any noticeable computer resources.

In my opinion the last update is fantastic. The clouds (worldwide), the water (worldwide) and the scenery in the UK looks much better than before and in my case I have a better performance in the sim.

Yes, its true that there are many things to fix (like the weather precision in certain areas, or to adjust the flight dynamics) but in my opinion ASOBO is going in the right direction

Please dont forget that this sim is probably the most advances and complex platform/sim/game ever made.

Yeah, I’m piecing together my home cockpit using Air Manager + Knobster. I pretty much have to pop out my instruments. 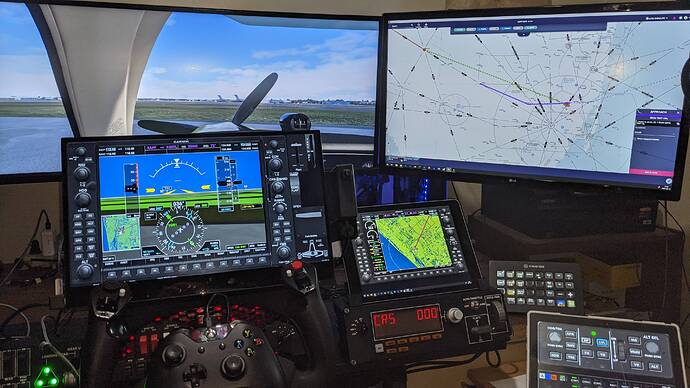 The comments were flagged by approved community members. Every flag will be checked by a moderator, so there’s the chance that flagged comments will be visible again, aslong they are not violating the CoC.

Spikes were actually more tolerable to some extent, IMHO, as they were there popping up and did have the chance to disappear as you come closer. The taxiway edge light infested airports, however, are actually more of a game killer as they visually are way more incredibly unbearable considering it’s where you are closest to the ground during the entire course of your flight. It might of course be a personal taste. Weird, though, taste for the bugs, pick from the list.

I don’t disagree they should fix them with a hotfix. I just don’t see them seeing that as a priority.

such as groupings of aprons and polys without any notice

At least those were in the release notes

Oh and they updated some aerial imagery outside of UK too, not in the release notes. Maybe only the Bing team knew about it.
As always the new imagery is better in some places and worse in others, breaking a few things in the meantime

It may add value to the discussion if you pull in your bottom lip and explain what, specifically, you’re whinging about.

This reminds me of the thought police in George Orwell’s novel 1984.

Mine has decreased. I always test a new release with the exact same flight at the same time with the same weather using the AI pilot in nyc. 5 to 10fps less with increased micro stutters.