This is really bad (FBW withdraws A32NX from the Marketplace)

I feel bad for the team 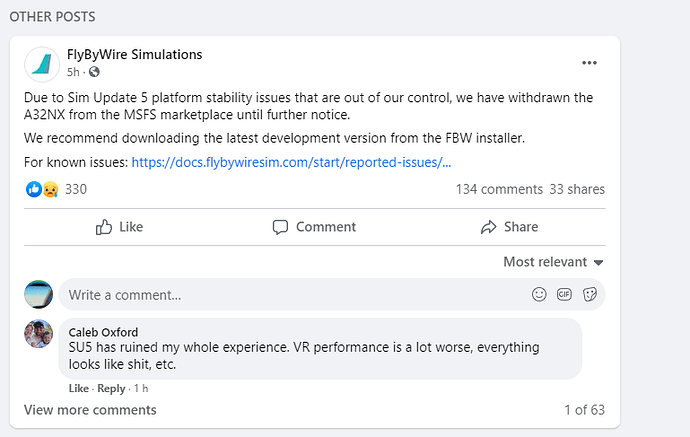 Aerosoft having issues too!
https://forum.aerosoft.com/index.php?/topic/165563-simple-traffic-an-introduction/page/2/&tab=comments#comment-1050795

So, these people create and offer to Microsoft a plane FOR FREE that is way better of the standard model and as a result Microsoft say thanks to them ruining what they have done? Amazing. Imagine how much they care about the single players if they deal with the developers in this way

Yeah, but I’m sure it would all be just fine if they’da just emptied their Community Folder prior to the update.

Hello, most of my thoughts have already been stated by others but all I’ll say is I’m surprised that MSFS doesn’t allow trusted/ major 3rd party developers to get access to sim updates before the general public.

Now I’m not a developer so don’t know how the process usually works. But I would have thought that maybe Microsoft would be like “Hi here’s the update that we’re planning to release shortly. Have a look to see if your Addon has any issues and if so please report it to us so it can be rectified” Even if it’s only a day or two before release.

This makes no sense, if the problem is the update then why does the development version work?

So, these people create and offer to Microsoft a plane FOR FREE that is way better of the standard model and as a result Microsoft say thanks to them ruining what they have done? Amazing. Imagine how much they care about the single players if they deal with the developers in this way

Yes, Microsoft created and paid for an entire platform and the infrastructure it runs on, these guys created a mod for an existing plane. It’s the same thing.

The silence isn’t helping. We need an official statement from either Jörg or the devs. I wanna see reassurances that there’s a patch in the pipeline Asap.

Well, no drama but is so difficult to work with them before the release? At the end without the MOD the basic planes are not the best. So either they improve the basic planes or if the policy is to have the external developers to create product well they should at least speak with them in advance. Are not just these guys that are doing an incredible job for free, but also software houses experienced the same problems with the previous updates

Well, no drama but is so difficult to work with them before the release? At the end without the MOD the basic planes are not the best. So either they improve the basic planes or if the policy is to have the external developers to create product well they should at least speak with them in advance. Are not just these guys that are doing an incredible job for free, but also software houses experienced the same problems with the previous updates

I’d rather hear from the actual FlyByWire Team on this issue…I bet they aren’t as angry and as disappointed as folks here make it seem.

it’s not a matter of being angry, it’s a forum, it’s impossible to hear the tone of the voice. It’s a game, it’s not life, fine…what is depressing is the fact that most of these issues could be easily avoided.

I’ve got fifty bucks that says that didn’t help. I did exactly as they said prior to the update and it’s a white hot mess now. From a very enjoyable experience playing the sim to I think DCS world looks better and better all the time; at least over there I can take off from Nellis and go take it out on the casinos!

I am wondering whether PMDG is ready to release their 737NG with this state of MSFS (after SU5).

Asobo messed up a lot of other developers’ works and ruined PC simmers’ immersion just because of their Xbox release goal.

Robert at PMDG on SU5 performance.

Robert at PMDG on SU5 performance.

Personly I have found FPS increase from 15-22% depending on aircraft. From what we saw it seemed we were all in for around 70% uplift..yer to much to believe but we all saw it! The PMDG for me was my lowest FPS aircraft (VC view) it was 40-41 pre SU5...

Apparently they are also shocked at this update.

I have developed aircraft, scenery, panels etc for FS since FS98 and it has always been a uniform content system with the exception of one minor change or another in each version of FS. I semi retired from that aspect of the hobby when my wife passed last year, then picked it up again recently releasing my first scenery creation about a month ago. However MSFS changed everything from folder layouts to json files etc. I am still learning the inner workings and thankfully some developer friends have been teaching me what they know. But it seems with every update something major changes and it is hard to keep up with the changes. Most of these changes have been minor but SU5 completely changed almost everything from the weather engine to how gauges read certain functions.

Whether MS and Asobo want to admit it, it is the developer add on creators are the backbone of this hobby. MS and Asobo give a great engine most of the time to work with but add ons such as Top Mach F22, Fly by wire work, and many others find ways to make it all really great.

A little history to understand some people’s frustrations. Since Flight Sim first hit the scene we got a new version about every 2 years. When FSX was released we were promised updates, expansions etc. We got two small service packs and a small expansion called Acceleration. Then in 2009 Microsoft closed the studio and abandoned the community until 2020. I was never a major developer but there were those who were such as PMDG, REX, ORBX, FS Dreamteam, HI Fi (Active Sky), POSky and many more who kept this community alive along with the guys who made free planes, scenery, modules etc for Flight Sim.

For these reasons every time an update breaks major things in the simulator there is a lot of frustration because people remember history and there has been a lot of discussion and fear over when MS will abandon Flight Simulator again and just leave it in the state it is. I hope that does not happen for a long time because I love the hobby and the community. Flight Simulator (2020) has so much potential that has not even been tapped into yet and I personally love the simulator and want to see it go far but bugs like temp changes at high altitudes in live weather and other issue need to be addressed sooner than later as those are core mechanics for the sim.

If I was running the development team I would have an Insiders Preview test place like Windows has so that developers etc can see new updates a couple of weeks before release so they can have updates ready on day one of the update and give feedback. Not just limit them to the big developers etc.

That is just my two cents worth.

Why are all the people that are screaming that the ones with problems are whining or moaning not playing instead of on here?

They aren’t that happy either.

Well said Sir, difficult to express in a better way

This is not bad, but reasonable. I am glad some people remain reasonable and take a stand amidst the whole madness.

They can do it because their product is freeware and they are not corrupted by financial interest.

Anyone know why the they say the FBW plane won’t work but to download the Development one instead? Why would that one work?