A short note, as I was flying in Lisbon, I saw that the port cranes rendering is horrible and is a sore eye in the cities.! Some parts are even floating in the air. It is not reserve to this place and the program have real difficulty in rendering those skinny structures. IMO, It should be rework manually. 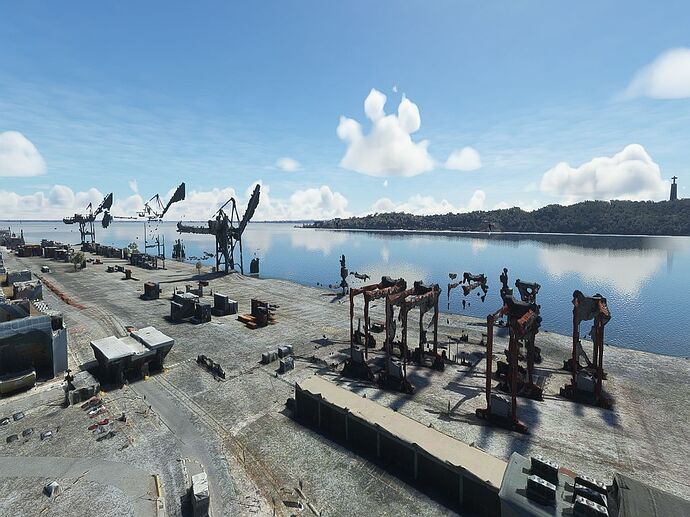 I suspect a lot of it is the algorithm trying to populate the worlds according to satellite imagery and photogrammetry . This is the software’s best guess.

4- Microsoft fix the ■■■■ thing. If they can make custom models for a lot of buildings, they certainly can make a “generic” crane to replace that mess.

I believe they are planning on overhauling MSFS from FSX over 10 years .

I compare this to doing up an old House (FSX).

What you are asking for is that one nasty vase in the downstairs toilet be replaced.

At the end of the 10 years we should hopefully have a stunning house, barely recognizable from the original house.

But they many never replace that vase…

It isn’t for MS to fix. They didn’t create the PG data, it was supplied to them. Any structure with fine detail like this usually suffers. Have a look at any PG girder bridge or thing like Ferris wheels or power cable pylons. PG will never work on those properly.

If you fly around any city which has construction sites, like Paris near the north side of river, you will find also phantom tower cranes which have missing parts and are suspended in the air.

AI is fine but it’s still a machine doing some logic. Results have no sense in many cases and only works more or less fine if the object is a regular structure o a typical polygonal building.

AI is fine but it’s still a machine doing some logic.

Not in this case, really, not for PG. If it were a non-PG region, where 2D maps are interpreted by a process to place autogen buildings of a qualifying type e.g. 2 story building, warehouse, construction crane etc. that would be applicable.

But in this case the PG data was created from lots of aerial photographs taken over the region. The object looks as it does because of the quality of the data used in is construction. The crane will never be misidentified as a smokestack, for example, which is something that can, and does happen with auto-gen. It will always be represented by the correct PG data. As to whether that actually looks like a crane, well that’s the rub.

I uploaded some images a while back showing some larger powercable pylons. Because of their construction you can see through them. From the air this meant the grassy fields behind them were included in the imagery. When the object was assembled from those images it looks like someone had attempted to camouflage them. From any angle you could see the grass through the steel framework.

As you rightly point out, the process works best with solid structures that cannot be seen through. Large buildings works best for this, not trees.

4- Microsoft fix the ■■■■ thing. If they can make custom models for a lot of buildings, they certainly can make a “generic” crane to replace that mess.

You can ask for that in an inappropriate language, but it doesn’t mean MS or bing will suddenly do that for you.

Live with it or disable photogrammetry. Right now it is the limitation of this process as pointed out in detail above.
Also, if you think creating models all over the world is that easy, feel free to create addon scenery yourself. I’m sure the community will welcome it.

I for one rather have some of these glitches than the autogen mess that we have seen in earlier sims (or even in MSFS without PG).
But you know what? You have the choice to revert back to that old look.

It shouldn’t be beyond Asobo’s means to identify and cull the most egregious examples before replacing them with generic models.

One of the worst crane depictions are in the new Update of Spain notably the Barcelona city docks ,they look awful.I am surprised that they missed this out as the City is otherwise superbly rendered.These docks are well within walking distance of the city ,I have personally dragged a suitcase from town to them to get to a cruise ship.The docks are also on the flightpath to the airport having flown there numerous times in real life so one way or another you often pass them ,it needs sorting…please!

Well, not to worry it will be adjusted “Some Day”.
I submitted a ZenDesk “Missing Bridge Spans for Interstate 10 and the 3 mile Bay Bridge” in Pensacola, FL about a week after the sim was released. Cars drive across the water because of the missing spans on the interstate 10 bridge and the 3 mile bridge from Pensacola to Gulf Breeze.
Now, it is April 2022 and the missing spans on a major cross-country interstate are still missing.
Stuff like this is just not important enough.

Depends on the priority of course. And for those working on the bing data, fixing existing detail issues isn’t as important as push out new world update regions - which I actually tend to agree.
Having new mesh and some PG areas covering more of the globe is more important for the overall community than some local issues mainly in PG that mostly are visible flying low.

Everyone has their own priority, and that’s fine. Asking in inpolite manner to fix stuff (as done by TO) isn’t fine though since it puts your own priority above all others.

Downside to photogrammetry sadly. Whenever I find things like this I look to see if I can find some replacement out there (I have been successful a number of times). The addon community with MSFS is incredibly strong.

What, say what ??? I don’t know why you try to defend MS so hard on this. They can easily replace those models as they do with so many other structures. If you are going to redo a complete city, it is a minimum to replace the most offending looking structures. Some of my coastal city addons have beautifully rendered cranes, like Orbx Singapore.

I don’t know why you try to defend MS so hard on this.

You should learn to accept other’s opinions…

If you are going to redo a complete city

They introduced photogrammetry. They didn’t “redo a whole city”.
You don’t seem to understand how that works.

Some of my coastal city addons have beautifully rendered cranes, like Orbx Singapore.

Did you pay for the World Update like you did for the ORBX scenery? No? Then now you know where the difference is.

I guess you’re right, not important enough.
…
Cars driving across water from missing span to missing span on an interstate running from Pensacola, Florida to California in a Photogrammetry City. I turn off road vehicles because it severely detracts from the realism to have MSFS generated cars and semi’s driving across the water to reach the next interstate 10 span and then find the cars driving UNDER the next span. Your definitely right, not important enough and also, there is no revenue to be gained.
BUT…We still love our beloved MSFS.

there is no revenue to be gained.

You don’t get new buyers/subscribers by showing a trailer with corrected bridges.
But you get them with showing nice new landmarks and PG cities.

Since we don’t pay for additional world update contents, new players, subscribers (and marketplace customers) do. And they are the ones driving the development in terms of scenery.

But since they also add revenue for the base sim development (sim updates), we shouldn’t be too harsh with that marketing approach. In the end we all benefit from a living platform rather than being left to third party developers alone.
These days some people take things for granted, that simmers a few years ago would’ve got incredibly happy about.

Humans always want more including me ,ever seen a truly happy Billionaire?,no thought not😉

I just had a quick look at the Bing app, that comes with Windows 10, and the only PG city in the UK that you can see which is Southhampton.

Here is what that cranes looks like in Bing:

And here’s a bridge: 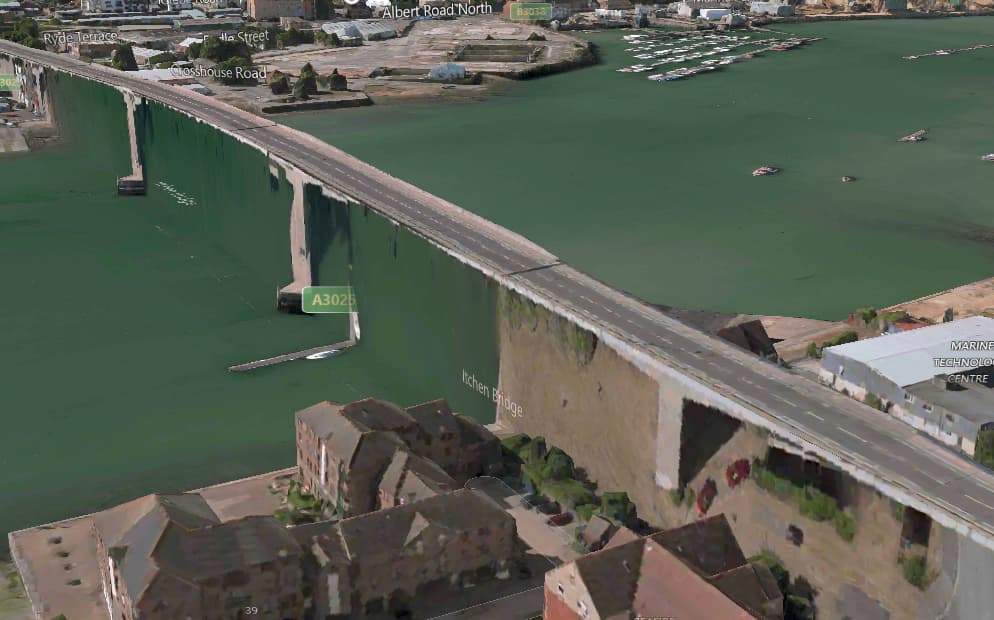 You can see that MSFS has nothing to do with the issue described by the OP.

Compare that to a more regular structure, like this IKEA, where you can even make out some of the words on the billboard to the right of heir logo: