Thank you! That is AWESOME!! I am glad they are going to be available fortunately. When the sim gets a little more stable I will probably purchase. It also depends if the Honeycomb Bravo isn’t sufficient but to be more true to life I’d rather have that setup for the bus.

Speaking of hardware anyone here know what exactly is going on with force feedback tech on the legal/patent scale within the flight sim hardware manufacture’s world?
Like its 2020 and no software nor hardware dev wants to touch FFB.

Last time I looked into this (maybe 6 months ago ?) the patents were still active. I found out however that I could get a ffb joystick from a company called Brunner but that it would cost me about £1,200. I decided to stick with my ThrustmasterT16000m until I won the lottery. Unfortunately, nothing has happened in that area yet so I still have the T16000m.

I found out however that I could get a ffb joystick from a company called Brunner but that it would cost me about £1,200.

If they come up with a throttle and rudder included to go with that stick for that price I would buy it.

Same here using HOTAs with CH Eclipse Yoke and Rudders in between. 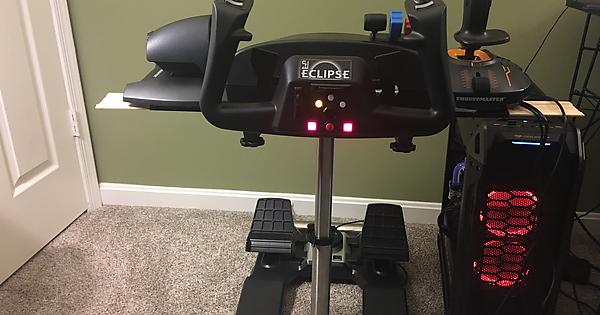 You seem to have a fairly similar set up to mine which is T16000m JS, TCWS throttle, logitech yoke and throttle (don’t use them now) and rudder pedals. I suppose it could be better but they work okay really.

Years ago I used to have a ffb JS (can’t recall the make) and wish i’d kept it now. I have however attached a DIY base shaker speaker to my PC desk and that gives some added vibration feedback instead. It’s really quite powerful. I’ve thought about adding a base shaker to the PC chair also but not gone that far yet.

I need to try this base shaker thing.
I atleast need some rumble feedback on landing and take off.

I looked at Buttkicker to start with but decided initially to do a DIY job and buy a separate amp and base shaker and connect the shaker to the PC table. I’m by no means an expert on electrics but managed to get it all fixed up and working in no time. It’s actually way too powerful and I have the settings turned down to something like 2.5 out of 10. Too high and the vibrations come strongly through to one of the rooms below. I adjust the settings upwards a bit for jets and downwards for prop ac.

It certainly adds a bit more immersion to the sim experience. I might look at Buttkicker for the PC chair at some stage. Hopefully, the floor won’t collapse!

Wow, you are very lucky!
I got the Joystick that is a good product but I’m still waiting the Quadrant ordered last August on Amazon.
My fear is that the Thrust Lever/Reverse cannot work fine because if it uses only one axis, with that single axis it cannot do two different things at the same time.

At the moment, for Thrust Lever & Reverse I use this old Joystick modified by me.
Lever-1 used for Thrust and Lever-2 used for Reverse, pulling it back.
Furthermore, I removed the stick and recovered the three axes that I can now combine with other functionality. 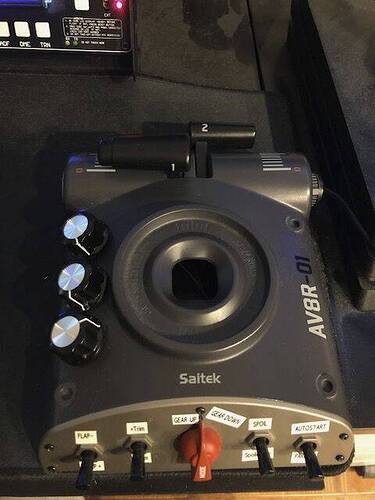 Just like the CH Products Throttle, there are 6 axes to choose from to use.

It’s a separate USB device, so it’s not constrained by the joystick if that’s what you’re worried about.

And, if you need more axes than that, I’m sure they could devise a way to just create another device.

I imagine that Thrust Lever consisting of two throttles with two axis, one for the left engine and one for the right engine. The axis in this configuration should go from 0 to 100 (for example)
But in the case of the A320 throttle this goes beyond 0 (negative) and in that phase it must trigger the reverse.
Normally an axis that does the Thrust does only that, while that of the Reverse does only that too.
Therefore for that device to work correctly they must work on the software together with ASOBO.
And perhaps this is the real reason that blocked the distribution of that device.

I stated the above incorrectly. In the case of the CH Throttle Quandrant, it’s a single device seen as two joysticks by MSFS (or any other piece of software). So there are 6 total axes available. I’m imagining Thrustmaster is doing exactly the same.

I’m surprised they limited it to 4 controls, can those two center ones be split in two for twin engine props?

A standard Joystick should have at least four axes: X, Y, Z & Slider and are associated with the three movements of the aircraft: pitch, roll and yaw while the Slider is associated with the Thrust.
Each of these axes performs only the task it was associated with.
If you only have one Thrust you can use it for single engines. If you have multiple engines you must associate them all to the same Thrust Lever or buy additional USB devices such as the CH Quadrant and associate the axes as you wish, but each axis does only one task.
Instead in the Thrustmaster TCA Quadrant, it seems that they want to use the Thrust Lever for three quarters as Thrust and for the remaining quarter as Reverse and this is what convinces me very little.
Furthermore, when you activate the Reverse you also have to give full throttle and this is another extra task that the same axis must do!!!
In all honesty I ordered it and I hope it arrives soon because I like it as an object but I think it will never work as it should.

i thought the add-on releases the 31st? is it already out?

It was a typo xD

I bought my Thrustmaster Hotas Warthog early this summer when I understood that it would be a problem to get hold of them once MSFS was released, and I’m very glad I did.

It was released in North America on Nov. 26th on Amazon. Though it seems impossible to get one.

Weird. Amazon says it comes out the 31 and they are taking ore orders.

Where are you from? Amazon US has all of the TCA add-on as released the 26th and currently unavailable for purchase or pre-order.

Been watching it for about 3 weeks. First week I’ve watched it it said releases the 26of November. the Week later the date changed to the 31st of December. Now it says out of stock.