Since the latest update I imported a flightplan from LNM and it looks very strange. It’s got me going all over the place and has these points in the plan that I didn’t put in called TIMECLIMB and TIMEAPPROACH. After TIMEAPPROACH its got me going back to another waypoint and then back to my destination. I’ve never seen this before. Any body else experience this?

This was there quite a while ago. Maybe it’s back. Try the FBW Dev update (but NOT the one from the marketplace yet)

Same here. Not just with imported, but also with new flight plans, just selecting a departure and arrival airport in the Sim worldmap.
And it’s not tied to the A320, it’s also on the smaller GA aircraft, so seems to be a simwide thing that has changed (broken) since Sim Update 5.

In the C172 “Classic” this morning leaving KMRY for KPRB… flight plan as simple as it gets: point A to point B: 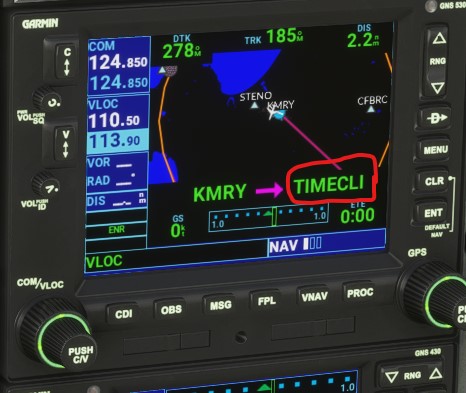 Yea, this feature(?) was introduced in SU5. I’ve been getting around it by not setting a destination in the in-game flight planner. Instead I set it in-cockpit using Direct-TO for simple point to point GPS guided VFR flights.

Idiotic future, the only way to work around this is to make your flightplan in cockpit

Yeah… Direct To works like a charm. A year ago it caused a CTD… so that’s progress!

Any solution to this except the “Direct To”? It’s pretty annoying to plan a flight like that!

Still experiencing this problem. Pretty iritating to say the least. The DC-6 wont even follow a plan anymore. I sure hope this hotfix cures this cuz this totally ruins the experience now. And I was so enjoying my time with the old girl before the update.

I think Asobo just find new ways to irritate users. There should be an option to turn the approach and climb options on or off. The flight does not even follow the magenta line when I select NAV. The destination airport name only appears after I have landed.

Yea, this feature(?) was introduced in SU5. I’ve been getting around it by not setting a destination in the in-game flight planner. Instead I set it in-cockpit using Direct-TO for simple point to point GPS guided VFR flights.

I don’t even understand what this “feature” is supposed to do but it’s really ruining my experience with the DC-6 right now and getting it to fly a plan without flying all over the place. I load a plan and shortly after takeoff select gyropilot on and select localizer and it will not fly the plan like it used to. Now it has a mind of its own and flying god knows where.

Yes, automatic flight plans ruin the experience. What is the point of having the world map with waypoints when TIMECLIMB, TIMEAPPROACH are always present? Asobo must make these automatic routes optional.

You can get rid of all the other unwanted automatic waypoints by switching from VFR to something else then back again but you can’t get rid of TIMECLIMB, TIMEAPPROACH without deleting the flight plan in the cockpit and set up each waypoint one letter at a time. I used to select a flight from my log, Fly Again, plan the route with World Map waypoints, and set cruise altitude in minutes.

Now I have to do that work in the cockpit every time.

By the way, why doesn’t Asobo save the waypoints with the log so when you Fly Again, the waypoints and cruise altitude from the last time would be set? I ask because I stopped using Load/Save a year ago when it would not allow changing weather during flights and switched to Log - Fly Again.

There’s some way to work around it with the G1000/G3000 mods. Before take off you can use “activate leg” to the first waypoint in your plan, so timeclimb will be ignored. Do the same when reaching timeapproach with the waypoint after it. Annoying, but at least it’s possible to use flightplans created with the world map or LNM.

Boy, this is a real annoying change. Prior to SU5 I spent several weeks planning sightseeing flights using Little Nav Map and now they are all useless. You cannot activate autopilot after take off because it doesn’t seem to know where to go. The active leg in the flight plan seems to always be the 2nd leg. Anyway, it is completely messed up. I am just using Hdg instead of autopilot to follow my flight plans. Also, as with a lot of past changes, there is no explanation as to why this change or what this does.

It’s probably another Xbox feature that some gamer at Asobo have forced up on us.

Same for me since the update. I’m flying with GA planes (Beechcraft Bonanza and Cessna 172). Is this a thing the actual Garmins do that was added? What is it for?

A little update: Before taking off if you ask the Garmin to reverse the flight plan then reverse it back again it seems to get rid of the TIMECLIMB and TIMEAPPROACH.

I’ve no idea whether I’m the only one, but the TIME bug has disappeared entirely, at least for now. It’s not something that happened with Hotfix 2, as that was the first bug I confirmed was still there to bug me, but at some point during the past few days, the next waypoint started appearing at the beginning of the flight and it’s been working fine ever since. Does Asobo sometimes sneak a quick fix into the system during that “Checking for Updates” message on the opening screen?

This issue is being discussed in this thread. You might want to take a look.