Too bright - is it possible to mod an aircraft to have a darker windshield?

I don’t believe I have a solve for your question, but related to it, here are a few topics about this you might want to check out to see if you agree with:

[FEATURE REQUEST] Can you please add a "Sun Glasses" mode

Add a command to toggle wearing Sun Glasses (not just in VR by the way).

If you’ve already tried looking to the sun in game through a sun visor in an aircraft, the suggestion is to make this a standard option you can toggle with an event you can bind (keyboard shortcut / hardware etc…).

In using the same rendering principle as the sun visor but in front of the camera eye(s), this would work great, with the game renderer as-is. In turn it is like a follow-the-camera 3D glass material stuck in front of its lens(es) (one per eye in VR)

I’d suggest FS2020 to offering and using the following post-processing and user settings options. Most are missing and mandatory for achieving a better experience with the game.

Allowing adjusting the game dynamic range because no all headsets have any brightness adjustment nor are restituting the full sRGB spectrum.

Allowing adjusting the game white clipping because some headsets panels are not fully sRGB (the Index is clipping whites a little bit more than the Reverb G2 for example) and this shows badly when in VR.

Allowing anyone adjusting the strength based not only on personal taste but also based on the render-to-display size ratios. In effect, it may require more or less strength to make this effect not overdone when using certain different size ratios. NB: UserCfg.opt might only supports 0 or 1 but could be supporting 0.5 for example. See References below for more details and source code.

Whether it is a monitor, an Oculus headset or any other display device, and whether the extension is present or not, end users would be able to overriding the default in a unified way.

I was able to edit the windshield texture file for the TBM. I only did half of it but you can see the difference (this is a 2D screenshot, but same result in VR)… more tinkering to be done…

I like the look of the TBM left window, it reminds me a little bit the look you’d get if wearing polarizing glasses.

What did you change in the texture? The alpha, the color, both?

I’ve got just the opposite problem. In the Cessna Longitude, the windshield view is TOO DARK. So i agree, there needs to be some way to control the lighting of the individual camera views. Given the number of complaints, i’m surprised this has not been fixed in an update by now.

Thanks, I have voted for all your suggestions. The windshield idea is of course not as good as having full adjustment or virtual sunglasses (with darker windshield then instruments and external camera types will not get the benefit) but I thought it might be something a talented user could actually deliver now as a temporary partial workaround ! And it looks like @NumberNumber481 is making good progress

Given the number of complaints, i’m surprised this has not been fixed in an update by now.

It is not the only one problem though:

but how does something like this escape the QA process when that graphics feature (presumably for 2D and VR) was talked about publicly so much. 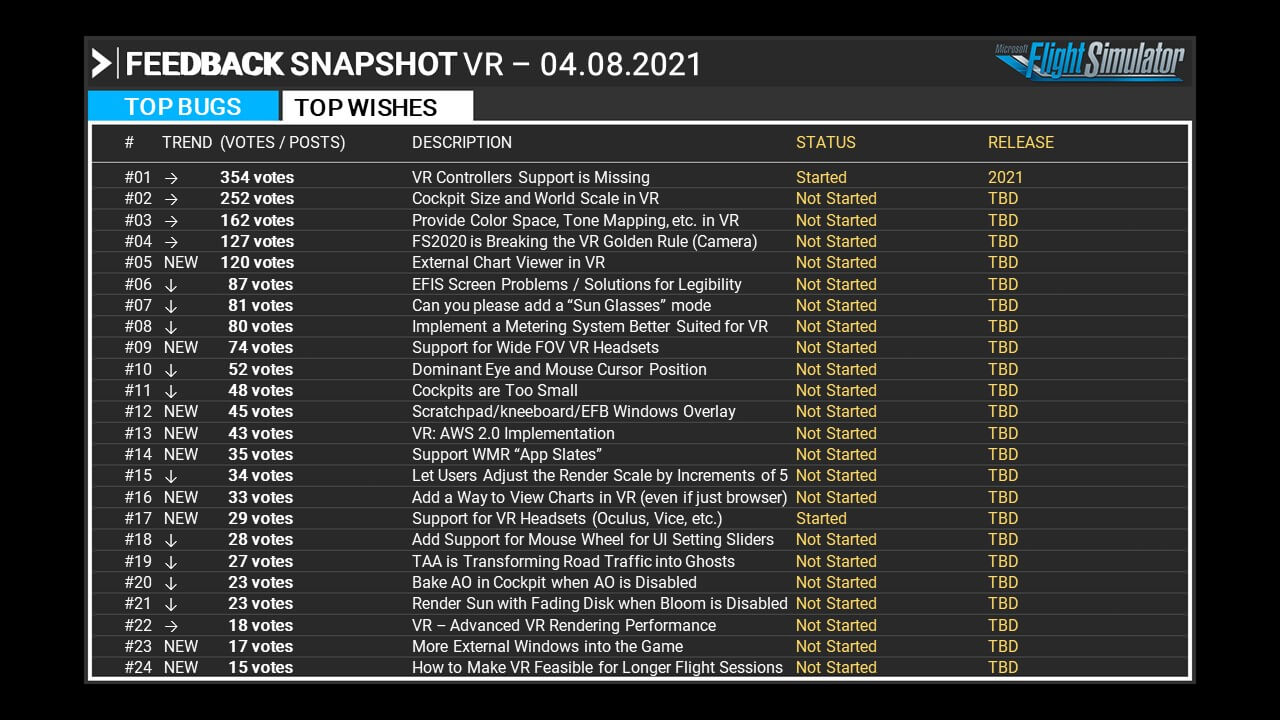 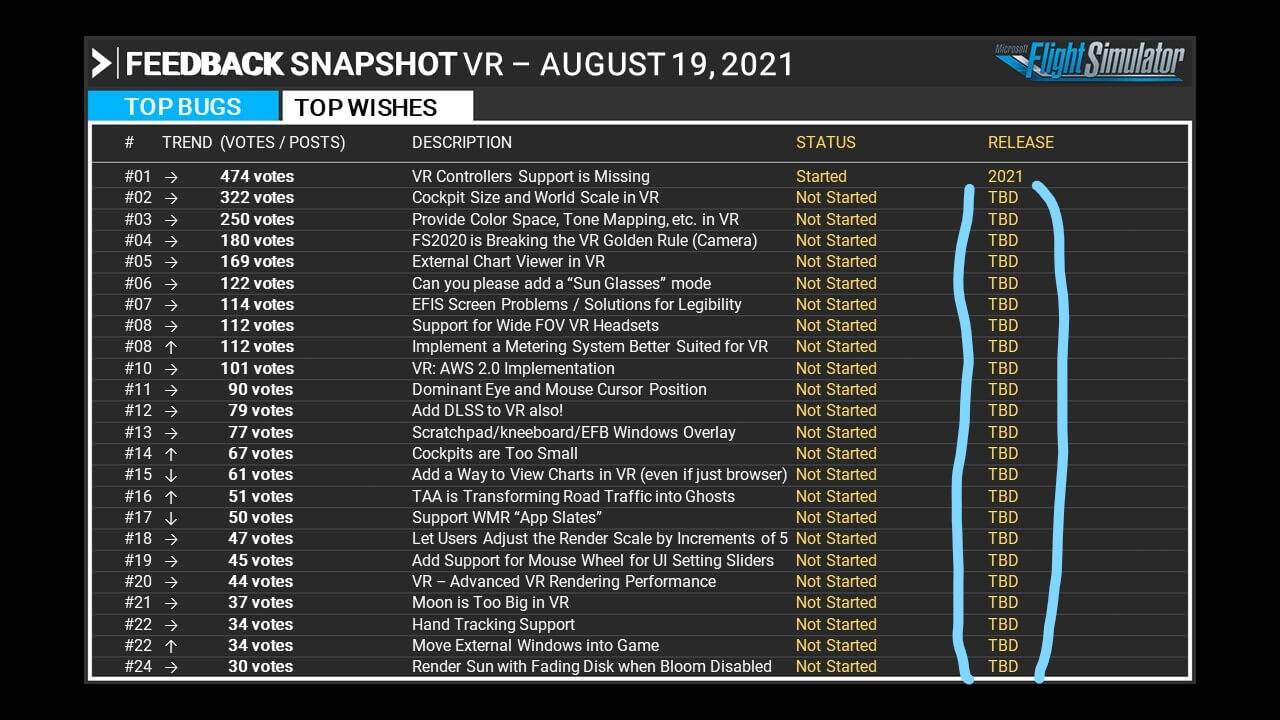 It feels as if there is no one working on any VR code in the game at all anymore!?

For those reading this topic, in addition to those posted by Cpt Lucky above please could you also consider adding your votes or thoughts to the below wishlist suggestion to reduce autogen building brightness:

In short: I suspect a good improvement to realism and immersion globally could be made by simply tweaking the reflectivity (or similar) of autogen buildings lower. In long: I am recently noticing many autogen buildings being too bright when compared to surrounding terrain, making them stand out too much and appear as floating white squares. I think it has always been a bit like this but maybe just more noticeable since SU5 due to them popping in much more often, and the general change in lig…

Thanks, I have voted for all your suggestions. The windshield idea is of course not as good as having full adjustment or virtual sunglasses (with darker windshield then instruments and external camera types will not get the benefit) but I thought it might be something a talented user could actually deliver now as a temporary partial workaround !

I don’t want my post to be misinterpreted: I’ve no other choice than using special “wording” to tell new users there exists topics about the very subject they are talking about, only because these are topics where users can vote and this is against the rules.

However I’m linking these topics with their content in the quote, not just the link, because I’m glad this experiment is showing exactly with screenshots what it could look like in just using the already existing rendering capabilities, which is exactly what I’m suggesting for the “sun glasses”,

In other words, sun glasses might seem like a very complex task or feature to code and add in the game, but my suggestion which is confirmed with this experiment shows it is merely displaying a textured quad covering the entire viewport with an adequate material only, which honestly isn’t a lot of code to implement either.

Anyone who knows how these files really work will laugh because I dont really know what I’m doing. I opened the windshield dds file in photoshop, telling it to “load the alpha as a channel” and then started playing with the file. At first I tried editing the alpha channel as I figured that would adjust the transparency, but that did not seem to make any difference. So I just picked a medium grey color and started drawing over the image. Low and behold, it was represented as a tinting in the sim. Once I figured that out, I more cleanly only painted over one of the windscreens in the file and thats the screenshot you see above. I have since applied the coloring to the entire image and turned it into a loadable “addon” type file. Once I get a chance here shortly to make sure its still working (just finished helping kids with homework and dinner duty!), I’ll see about posting it somewhere for others to try.

On a side note, I tried the same approach on the Asobo Husky and did not get the same results. Editing the only image I could find with anything to do with a windshield only affected the outside-in rendering… no effect sitting in the cockpit. This leads me to believe that they are just using the default “glass” texture that is probably burried in the protected portion of the sim installation.

Lots more testing with other aircraft to come.

I’ve got just the opposite problem. In the Cessna Longitude, the windshield view is TOO DARK. So i agree, there needs to be some way to control the lighting of the individual camera views. Given the number of complaints, i’m surprised this has not been fixed in an update by now.

Indeed the longitude has the most extreme windshield tinting I can remember from the default aircraft, and its files might be an interesting one to look at for those who are experimenting with this.

I am wondering if different combinations of glass colours opacities etc can produce a more natural effect than the longitude for instance, but I am probably hoping too much from a simple windshield

The TBM is easy…and makes some level of sense. Theres an alpha channel which controls the transparency. If you overlay the image with a shade of black/white it will affect the transperancy in the sim. As seen below, the right side is slightly darker (as it should be since its a slightly lighter grey in the texture file, and the squiggly line shows up as completely opeaque in the sim, as it should since it is pure white in the texture file. 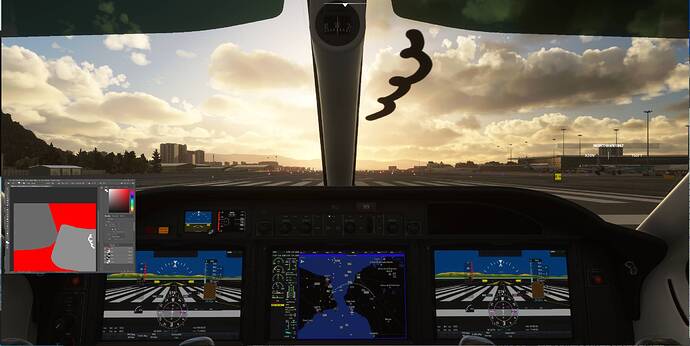 Thats where it stops being easy. Most other planes seem to rely on the default glass textures located in /official/onestore/fs-base/texture/glass. I found that I was able to create a basic mod which loads those default textures into the aircraft and edit them but regardless of what I do to the file, overlay colors, alpha channel, etc… the effects are extremely muted as compared to the TBM windshield… for example: 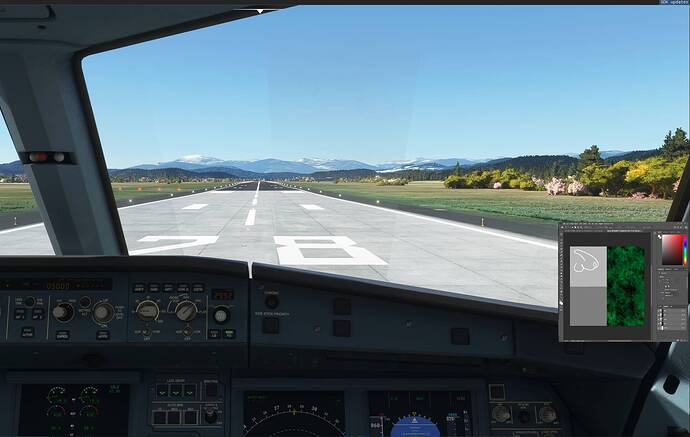 Either I am not understanding the proper way to edit these files (which is probably true), or there is yet another texture file that I havent found which it is using…

I just wanted to let you know I’m following this thread and hoping you figure it out. I’m rooting for you! That left-side of the TBM glass says it all. It’s just too bright in VR. When I fly I try to always get the sun at my back for just this reason. Even with that, it’s still too bright and of course it’s not always possible. So I’m rooting for you.

Me too! I also have this issue (on the rare occasion that I get as far as flying…)

Not that I am one but I’m sure any real pilot can tell you just how blinding a cockpit environment can be.

I since found some users do fly with sunglasses inside a headset though:

Hello there, anyone have issues with it being almost blinding in vr in some situations? And the colours are majorly washed out. Wish they would do something about this. Thanks.

In case it helps anyone, I found this modification which makes the sea/water darker :

I have still been unable to get anything resembling tint for any of the aircraft that rely on the base glass texture files (which appears to be nearly every aircraft)… That said, I whipped up this mod for the TBM so others can have a look and see what they think…

✓ TBM Window Tint is a Microsoft Flight Simulator 2020 mod created by MFAPS. Download for free to enhance your experience in MSFS 2020.

Hi I installed the mod but for some reason the aircraft is not showing up in game, would you have any idea why ? Thank you

EDIT - I can see that it is available for selection in the dev mode aircraft selector, I just didn’t have it in the main menu for some reason

They should show up as additional liveries for the default TBM. Not separate aircraft 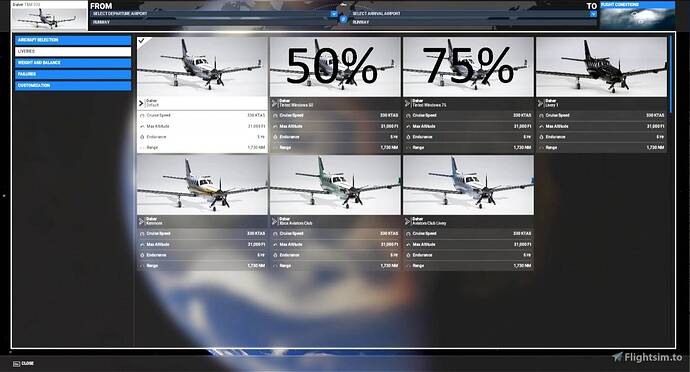