First of all I would like to say a big thank you to the people who have posted helpful ideas on this forum and also on youtube. None of the ideas here are mine I have just been determined to get better performance in VR with the best possible “Eye Candy”. I like “Eye Candy” because higher graphics settings make VR more immersive for me. So I have spent a lot of time trying other people’s ideas and putting together the ideas that I have found work best for me.

Secondly, I mainly fly low and slow and don’t fly airliners so my settings might not help with flying airliners high and fast or low and fast for that matter. My flights are mainly short.

Thirdly, I can only get Ultra OUTSIDE of special scenery like London and third party enhancements, although I can fly Ultra in some 3rd Party enhanced scenery (for example Napier in New Zealand - I fly a lot in NZ because I live there, but I have also tested in France, UK and other countries with FS2020 improved scenery)

Fouthly, there is not a lot of detail in the settings information below as I assume most people trying to get better graphics in VR have read the more detailed discussions of CptLucky8’s posts. If not then I recommend that you study them.

Fifthly, I only know that these settings work for me.

Main points of my rig are :-

Most Important points of my software settings:-

I used the Display Frame Timing overlay in OpenXR Developer Tools for testing and this stays Blue nearly all the time. If it starts to get some Red I lower the Render Scaling. If I think I can get away with it I increase the Render Scaling (e.g. in the Invercargill area of New Zealand I can run it at 80 or 90.

I miss the main ‘main point’ of your rig, the GPU?

wow ok…i am desperatelly curious what exactly it is you did that got this working for you like you’re describing because I run a similar hardware (i9700k, rtx 2070 non-super, 32gb ram, Dell Visor) and I can’t run this on your settings on any given day. I don’t know if it’s the 60hz setting that’s giving you so much headroom because on my wmr 60 hz brings unbearable flickering. I can fly at 100% oxr with autoprojection always on and ingame 90% TAA but I have most settings either on medium or off (like reflections etc, they’re all disabled). Now, we all know the posts about performance here, but can you please tell me 2 of your settings:

HAGS ON; Game Mode Off - but I don’t think they matter much.

Since yesterday I use driver 466.63.
I have always been one to go to latest driver so I didn’t being on an old driver just for MSFS2020 and 466.63 is just as good as the old one or maybe a little better.

Yes the 60Hz gives a big boost . From reading peoples posts I am not sure why some get flickering and some don’t. I only occasionally see flickering light around on an instrument. Peoples definition of flickering varies as well. One thing I have found is that the cable on my headsets is very important and bad cabling route or twisting causes whole screen flashing. Are you getting small flickers all over the picture or is your screen flashing a bit like lightning? 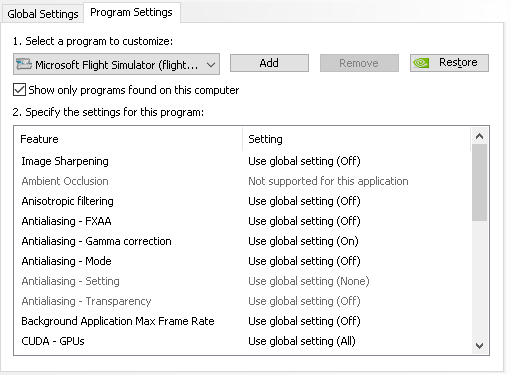 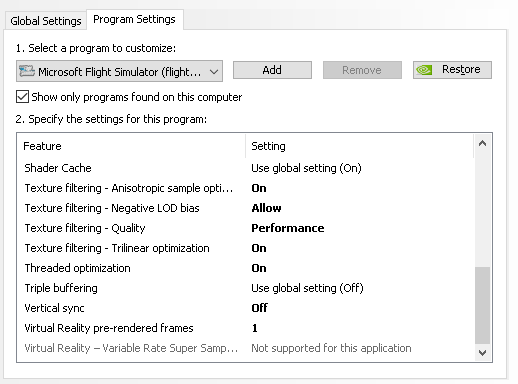 Hello again there. Thank you for the information. I tried 60hz yesterday again after a long time, for me it’s just really really noticeable flickering all over, like a stroboscope or like if you saw a crt monitor in a tv broadcast

Impossible to overlook or tolerate. I didn’t test for performance that way though, I might try that just out of curiosity today.

It’s really puzzling why with similar hardware you get flickering that bad and I get almost none. Which WMR headset have you got? I sometimes wonder if people are getting interference from audio or somewhere. I know that sounds a bit silly but in the past I have tracked down similar problems to amplifiers nearby.

If interference were the case it would have been perceivable at 90hz as well. I have a 1st gen wmr Dell Visor. I think it’s more uncommon to NOT see the flickering actually

I think you are correct. It may be your VR headset. Maybe the people with a Samsung Odyssey 2 get less flicker. I am crazy enough to have another PC which I use only for Sim Racing. It is an i9, GTX2080 with an HP Reverb G2. I tried 60Hz and MSFS 2020 on that yesterday just as an experiment and NO flickering. That PC has a motion platform and 3 amplifiers which drive a buttkicker and 4 pucks and I have had some interference problems with it on 90Hz. As I have cured the problems I don’t know whether I would have had problems on 60Hz. Yesterday with MSFS 2020 was the first time I ran the Reverb headset at 60HZ.
(I have been a computer software person all my life but I know remarkably little about electronics.)

G2 is a better headset, I agree. My only problem with the G2 is that in FS2020 I cannot use as many of it’s pixels as I would like. So I am quite happy using the G2 for sim racing and the Samsung for FS2020. I find that with the settings I described in the post the Samsung does almost as good a job for me in FS2020 as the G2.

Been doing some more testing of the settings and found OpenXR Developer Tools Custom Render scale 120 and FS2020 Render scaling 60 is also a good hot-spot for me. It gives 1356x1689 which is midway between 100/60 and 100/70 on my Samsung headset.
Obviously, there are lots of places that are not smooth at these settings e.g most of England is heavy on resource and tailor made airports are a problem. But if, like me, you prefer to fly less populated places and rural areas of Europe and the world then they give a nice smooth ULTRA flight even at low levels as long as you are not getting flickering.
As for the flickering, some planes seem worse than others. I fly the Cessna 172 a lot and it is flicker free. Some of the others appear to have windscreens that cause slight flickering for me.

After lots more experiments I am now very happy with FS2020 in VR. Amazing running on Ultra settings in my area of New Zealand and other parts of the world except for the big modded cities. Just done a great flight from Invercargill to Manapouri in the Southern Alps in the Cessna 172 in real weather.

I have some community updates running all from Flightsim.to :- 10 metre Terrain Elevation by Mikeaat; Invercargill Airport by Iswain; vegetation and trees adjustments by SpritelyNZ. Various other NZ airports.

I have modified my original settings from this post:-

These settings give me a render scale of 1900x2367 on my Samsung Odyssey 2 headset. (BTW I wear glasses with the headset! I have mdified it with an old piece of rubber door stop to keep the lenses off my glasses and 4 rubber bands to hold the headset closer to my face (a real Heath Robinson set up lol)

I ALSO SET THE PC SETTINGS IN FS2020 TO FULL ULTRA AND RENDER SCALING TO 200 as suggested by Pie in the Sky Tours and others on YouTube (Thanks!)

Final result is brilliant graphics and smooth (for me!)

Thanks again to all the people that have posted information and videos that have helped me to achieve this level of VR. I never thought it would be possible!

You can share your video - just post it in the content creators area and then you can provide a link to that section in your posts.

Some people are just more sensitive to 60HZ than others. It’s just the way your brain is wired. Many people are gappy with G2 @60Hz and don’t notice anything wrong. I can’t stand it: I see nauseating flicker all the time. So it’s not the just hardware, it also your brain.