Unlocked Jack Of All Planes Today!

I was able to complete 70 percent of the planes on SU8.

Please post here if you are not getting credit for your flights, because i did this in the beta. Lets Hope this is fixed and no one reports back with it being broken again. 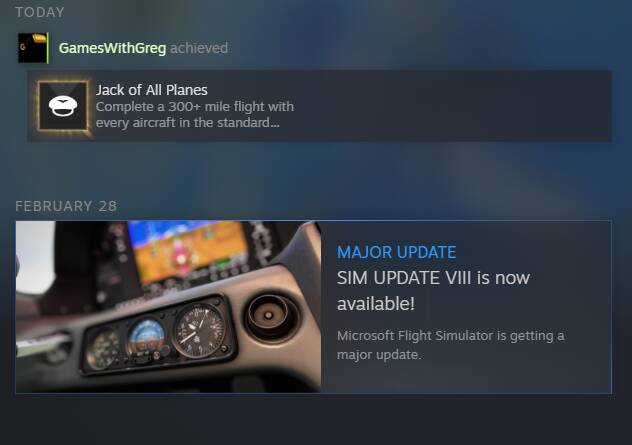 I’ve been stuck at 80% for quite some time and I’d kept track of which aircraft didn’t progress the achievement.

One of those was the Ziln, which I flew 300+ miles during the beta, and it still didn’t count.

You must have been born under a good sign.

I thought I’d read that some people were claiming 3rd party content was interfering with this achievement.

Do you have anything installed other than the base content?

I’d like to set that theory aside if it is incorrect.

I Do OWN the F14 and F15 but i have not had them installed for quite some time. I also Own The Carrier Mod (11.99) or so. That Mod is installed but its the only other mod i have.

Thanks. I’d give your reply a heart, but I’ve got 7 minutes left to wait before my daily heart quantity resets!

I flew two of the aircraft 300+ NM this morning that haven’t counted for me and they still aren’t counting for me.

I even completely stripped the sim of all content other then the WUs just to be sure nothing could conflict.

Did you try doing them in the beta? Try the beta and tell me if your test didn’t fix it. Third times the charm huh?

I can’t go back to the beta, but I did fly the Ziln 300+ miles during the beta and it didn’t count.

In short, I’ve seen no progress in either the beta or this final release.

The last time a flight counted for me was in SU6 and then they just stopped once I was left with the Beechcraft G36, Robin Cadet, Robin Cap10 and the Ziln Savage Cub.

Those last three are a major pain to fly 300 miles, too.

I flew a twenty minute flight (C172) and got the time but didn’t get credit for the landing. First takeoff to landing flight on SU8, I had been practicing approach and landings since Monday and got credit for each.

20 minutes is not going to cut it. That does not sound like 300 miles. Something of that planes nature and speed are going to put it around 1:30 - 2:00 hours of flight time. I do Modesto to Santa Monica, IFR sets the mileage over 300 miles (257 nautical or so)

i have never quick refueled on those flights; just the bush trips.

I just set the fuel to unlimited.

can you use the ai assit do you know for the planes that dont have autopilot ?

Yeah i think i did the Icon A5 on AI assist and noticed it almost flew me into the LA Foothills.

Just don’t rely on it.

I’m having to try and reverse engineer which planes I’ve actually completed and which I haven’t since I never really paid attention to the achievement before. Just going by my logbook, I should have 8 planes complete, yet I’m only sitting at 30% complete (6 planes). So, I’m going back and re-flying any planes I’m not 100% sure about.

Unfortunately I don’t know if certain planes are bugged or not, or of any add-ons like liveries or improvement mods block the achievement.