I’m not expecting (or trying really) to convince you, but I genuinely don’t get this issue, per my other posts in the Q&A thread (below). This does seem to be a local machine/hardware issue - which needs to get fixed - and so we should give them all the help we can to do so.

I really don’t think this is what he said or what came over in the broadcast. On the LOD issue he was very clear - they have not deliberately changed anything, and in their investigations they are struggling to reproduce what is being highlighted to them so they are looking for more help and examples to help pin it down. Personally I can provide them with pre/post screenshots per other threads I’ve done - although those will only confirm “no change” for me. He hinted that it may be machine spec…

Meteoblue is a forecasting tool right? So they are feeding the forecast data in - if it is ahead by 20 mins, that seems pretty good to me and a more than acceptable margin of error given how hard weather forecasting is.

Those stronger cross winds in a C172 can be interesting. Even more so on a coastal airport like Atlantic City, with the tall building along shoreline so close to the airport.

I don’t think MSFS is quite up to simulating winds patterns around buildings ??
just as well !!!
maybe that will get improved when/if they add Gliders, and things like updrafts will become critical.

But will be welcome nonetheless

Fair enough … but as it is meant to be REAL Time weather, the Time could be adjusted to sync to correct time, before it is sent out from the servers to MSFS.
Would add to the realism, without messing too much with the weather/time real world syn.

It was just strange, thinking that it was Real Weather, and the time on the Panel clock was not correct.

Small details, but they all add up. Attention to detail is KING .

Don’t disagree - also real time in the sim isn’t typically real time. I’ve no idea why, but could all be related. I think it is usally about 30 mins ahead, but I’ve not paid much attention to it really. I might dig around at that later.

What about the Photogrammetry and LOD ??

PS: Dear Jeorg Neumann, that’s not how you pronounce “Aermacchi.” The C is pronounced K

The Planes are TWITCHY … because they are Dynamically Unstable, and the AP PIDS seem to be being “TWEAKED” to try to remove that “Twitchiness” when the AP is on.

And that’s the problem When you start describing things with incorrect terms like “Twitchness”, and “Tweeked” there is misunderstanding and confusion.

The only thing that can have “Twitchiness” here is the PILOT !!!

The Plane has aerodynamic Dynamic Stability, or lack of it.

The AP, is based on PID controllers that have Gain, Diff gain, Int gain , Impulse response, Limits, etc etc

But good you know this stuff … (so do I

If you get both right, the plane flys in a Realistic Stable manner, with AP On or Off.

You don’t start increasing with the AP’s response time, to try to correct for an unrealistically unstable aircraft… or at least, you should not .

Don’t disagree - also real time in the sim isn’t typically real time. I’ve no idea why, but could all be related. I think it is usally about 30 mins ahead, but I’ve not paid much attention to it really. I might dig around at that later.

If you are flying in your own Isolated “semi real time” world, with weather that is based on the real weather, but not necessarily at an exact time (as obviously it cannot be), that fine.

You are in your own, semi-real “Time Bubble”

But when you start getting into Multiplayer situations, like say Vatsim, then a universally “same time” does start to become more important.

Basically, what I am saying, is irrespective of the weather time, the Plane Time should be correct Real Time. (Ideally !!! )

tomorrow sure be released

I’m not so sure - they said “this week maybe”. I think we get patch notes tomrorow as part of the weekly dev blog (update)

tomorrow sure be released 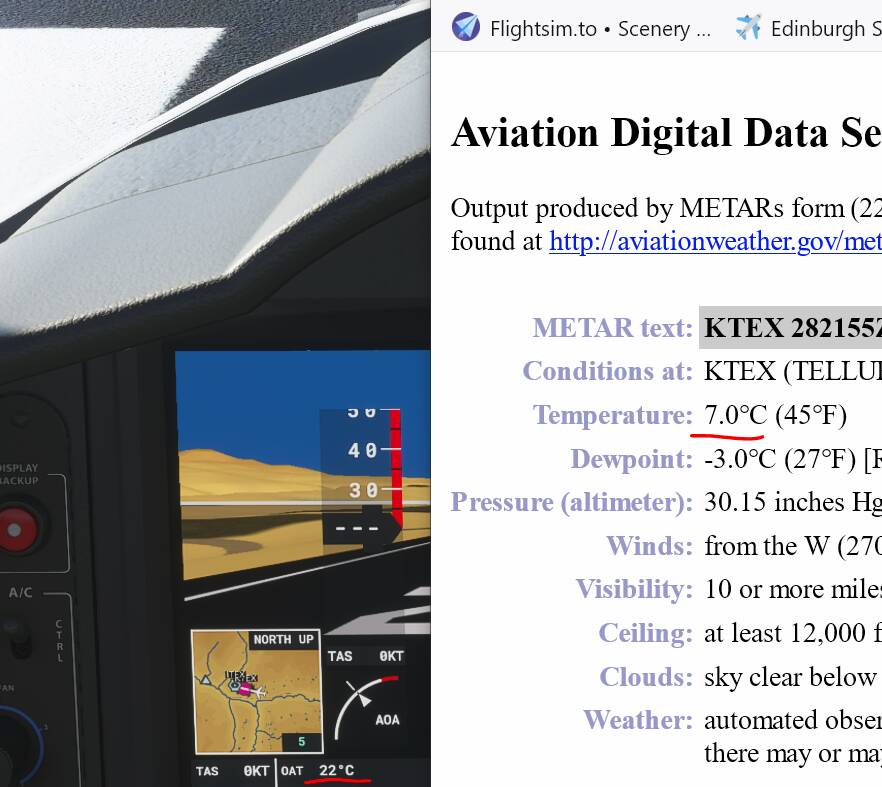 I dont get this. 2 dev updates ago the last words on LOD from their side was “we know where the issue is and have a way to improve it without too much perf hit”. or words to that effect. It’s to do with the 2 x 2’s in the cfg file for terrain and object LOD basically. These used to be higher I suspect when moving sliders to the right.
If we’re reset to zero after all the screenshots that were published and people taking the time to show comparisons of before and after; have we rounded the curve on this issue !

See if the wx in MSFS matches Metro Blue as that is what MSFS uses:

If it matches, then MSFS is correct. But if the wx doesn’t match real life in Metro Blue, then it’s Metro Blue’s data is at fault.

I can tell you from MY own experience, it’s not hardware or driver related. I have all the latest drivers and as I’ve mentioned several others have been able to replicate the same issues, primarily with LOD degradation (you can even tell when flying, especially in airliners, at 4k to 6k that downtowns rarely fully get “drawn” until you’re literally over the top of them). But, wish you luck – keep us posted!

My entire point in my posts were the fact the LOD issue bug was created (there are a couple of them), one by me and it is already ranked in the top 10 bugs. There are countless examples and screenshots.

No one is saying “let’s not help Asobo get this fixed.” I’m saying it did not go over well for me when Seb, the CEO, said they need examples and want more specifics. It’s been called out time and time again, no?