Update on the state of water masks?

In the last Developer Q&A, it was said that water mask updates would be delivered via streaming data, and that water masks demonstrated in the Around the World trailers would be released to the live builds not later than a month after the trailer’s release.

Clearly this is not the case. It appears that water mask updates are dependent on the WaterBlurMasks.cgl file, and unfortunately, the majority of areas with tropical water demonstrated in the Around the World trailers are yet to appear in the simulator. For example the Oceania trailer, released on 18 August.

Can you please clarify the situation and maybe give us a rough roadmap regarding future water mask updates?

Here are the rest of the locations that are still missing the proper water masks from the Asia, Africa, Europe and America trailers. 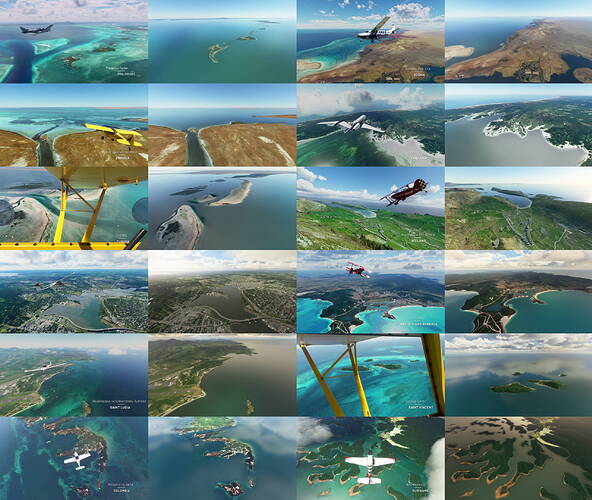 So far, the locations featuring tropical water as advertised are:

Most of them are in South America, and were added with the latest WaterBlurMarks.cgl update earlier last month. It’s good to see progress, but it’s weird that they decided to focus on areas showcased in the newest trailer first, and there is still no explanation for some of the water masks that went missing with the same update. Some clarification on this matter is needed.

This is false advertising.
Maybe we will have real answers this time.

Unfortunately at this point it is. It’s been five months since the release of the Oceania trailer, which proves that their latest statement is bogus.

I’ve read so many conflicting explanations, like the water masks being fully disabled for the trailers only, or the trailers being captured on a special developer edition that nobody has access to. If they could give us an honest answer on this situation, the delays could be understandable.

It’s also worth noting that Moorea was showcased in the Xbox trailer with the proper water masks, and yet they are still missing in-game.

I hope @Jummivana will keep asking so we truly understand what’s really going on.
Also they talked about a map showing the water masks locations. It would be great if we could have an idea of an ETA

It’s also possible that they are going in a different direction with this, which I hope, being that they use water depth and other data to recreate these shallow waters instead of using satellite images with baked-in waves. They only look good from a certain distance and usually they are also incomplete or change every time bing gets new satellite or aerial images.

Yep, we really need clarification on this.

The last Q&A was nearly two months ago. In that they addressed this and said that the water masks need time to be implemented in the streamed scenery data.

It’s been 2 months since that explanation and we all know that aged like milk.

I don’t understand why they’re holding back on the water masks, it’s like taking petty revenge against us haha.

It’s also possible that they are going in a different direction with this, which I hope, being that they use water depth and other data to recreate these shallow waters

This is what we need to be asking for. The 2D aerial textures blended into the water that are the water masks look ok at altitude, but they’re super ugly when you land on them or get very close. It’s like landing on a lifeless green floor. I’ve pretty much shelved flying the seaplanes as a result.

It’s been 2 months since that explanation and we all know that aged like milk.

They just don’t have the manpower and the time. There are 8 thousand outstanding features they haven’t gotten to yet, and they’re stretched thin as it is. They should just come and say that:

“Hey, we’re working on it, but comprehensive water masks and volumetric water are going to take literally years to make it into the simulator. The ones you saw on the trailer were made from a dev build without any water masks at all. Maybe we can all vote on the locations we want to see masked, and we’ll add a few of those. But you’re never going to see all the locations in the previous trailers because they don’t exist as water masks, sorry.”

Just straight up and honest, and then folks won’t feel like like they’re being bamboozled so much. Maybe Microsoft doesn’t let Asobo be that up front. /shrug

They just don’t have the manpower and the time. There are 8 thousand outstanding features they haven’t gotten to yet, and they’re stretched thin as it is.

That may very well be true, in which case they simply shouldn’t release these trailers and say ‘look at our star-spankled awesome water masks. Flying near coastal regions will be your biggest wet dream with MSFS’ because all that’s doing is creating a false sense of hope for people.

Just straight up and honest, and then folks won’t feel like like they’re being bamboozled so much.

Agreed. Communication is great, but not when it isn’t transparent, and honest.

That is an interesting idea, though I’m not sure if the data is here yet. Prepar3D which has bathymetry mesh is only limited to the USA I believe, and to recreate the same amount of detail the tropical water has from aerial imagery, it would have to be of extremely high quality. Maybe someday it will be a viable solution, as the team are committed to sourcing the best data available.

Right now it seems that they’re sticking to Bing Maps imagery, since the latest WaterBlurMasks.cgl update enabled several locations, mostly in South America, that were blurred before, but it also caused some previously enabled water masks to disappear which means they might be working on them. Some of the baked waves can be cleverly hidden if the water masks are done right, but from what I see they’re not doing a concentrated effort on that.

If you compare the water masking in Culebrita for example, in the trailer it looks just like the same spot in Bing Maps, but right now in-game some unintended objects and a few waves are blurred. But in some other areas, the waves are clearly visible even though they could have been cut off easily.

Whatever the outcome, they really need to be more transparent about this process.

That is an interesting idea, though I’m not sure if the data is here yet.

If you look at the Navionics Marine charts, there is a worldwide coverage. But volumetric water seems to be a bit overkill for this simulation.

The best way to do it would be using the coastal limit and an AI neural network, that will automatically select area with reefs and shallow waters.

But volumetric water seems to be a bit overkill for this simulation.

It really kills it for me in the bushplanes when touching a puddle with one tire triggers a crash, or that you can’t taxi the A5 into the water from a beach. Or that the water is totally opaque and the plane doesn’t perturb it. I’d love to use big tires to taxi through a shallow stream, bob on a swell in a big flying boat, or be gently pushed by waves onto the beach. Going from supposedly less complex video games that let you do all of these things, and have volumetric water, it’s disappointing. There are so many other amazing leaps forward with Flight Simulator, but the water is still stuck 10-15 years behind. If the sim was strictly about runway operations, this would be totally fine. But they’ve marketed this game’s bush and seaplanes.

I like the idea of tasking something like Blackshark AI to generate watermasks, and that’s their long term fix for sure. If they can do that, I’d hope they’d also use something similar to generate a consistent and comprehensive elevation mesh. A huge problem in the game right now are all of these disparate data sources conflicting, leading to coastal water creeping up cliffs, rivers flowing up hill, and nasty glitches around rivers and lakes that that cause massive canyons and plataeus. That’s only going to get compounded in errors and glitches if they try to throw a bathymetry mesh in on top of this mess. But if they can eventually get that full encompassing elevation mesh, then they’re most of the way to volumetric water already. We’re already flying through a volumetric fluid with great optical effects and physical interaction.

I like to think that, when they add sailplanes in 2021-22, they will overhaul the water surface system and restore the missing effects and functionality from Flight Simulator X. Let’s hope they will address that in this Q&A.

I’m just interested in what areas have received water masks and what haven’t. I understand they continuously implement new ones and it’s a long process so no need to ask about that.

If you are interested in the current state of the water masks demonstrated in the Around the World trailers, check out my first two posts. I’ve posted pictures of the missing water masks and the locations that have them, I can also create a picture compilation of those if you’d like.

Most of the water masks in South America were added with the tiny 685KB patch before Sim Update 2, however that same patch also removed some existing water masks. People have reported that they were removed from the Bahamas and some islands in the USA, and if you check out flightspots.co you can see that at some point, Tonga and Tungbukan Island used to have proper water masks too.

That alone deserves an explanation, because we are supposed to be getting more and more water masks enabled, rather than disabled. And besides, their previous statements about trailer water masks coming to the game in around one month after the trailer’s release is false, which needs a correction. As I’ve already noted, the Oceania trailer was released in August, and yet all of the eight showcased water masks are totally missing.

It is understandable that this might be a long and difficult process, which is why an honest explanation and transparency are necessary.

Oh I see. Well I agree with you then. 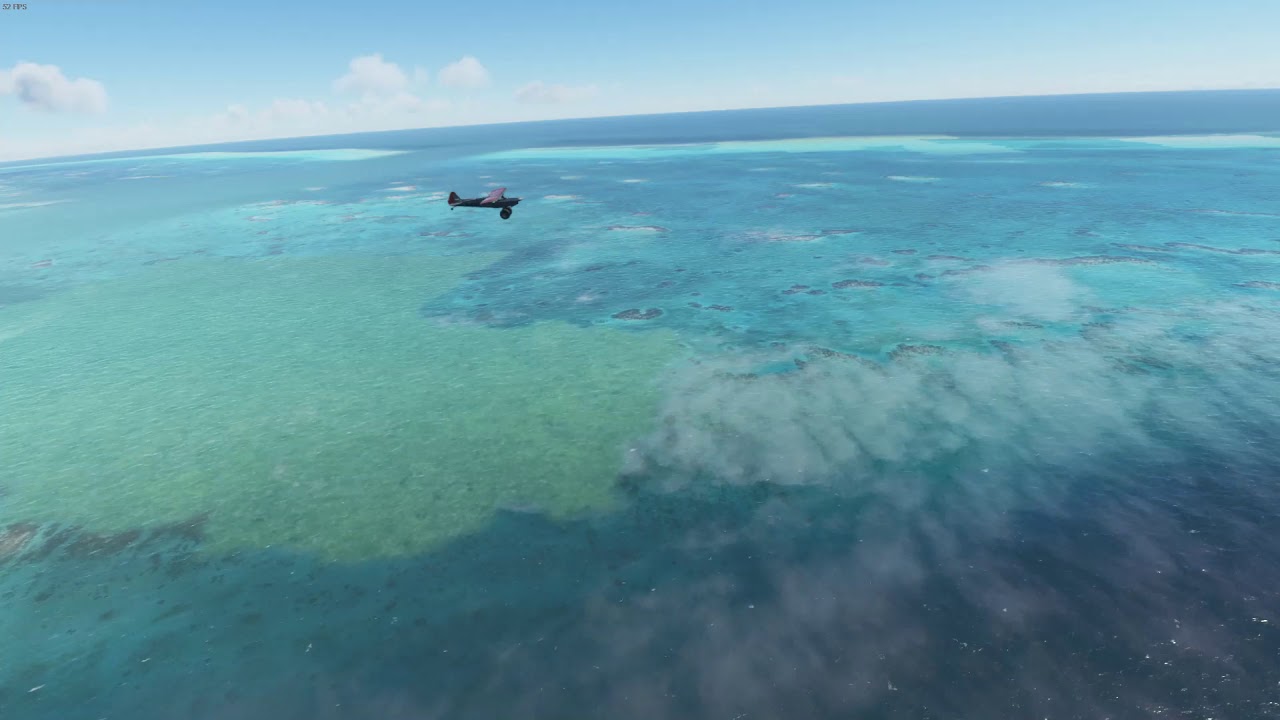 Here is an example of water masking in the sim.

Very nice video, and it shows off well how beautiful the result of proper water masking can be. It’s a shame that we’ve got so much good imagery of tropical water and yet it’s not being utilised very well.

I’ve decided I will also create a compilation of the trailer shots that do feature water masks to further show how good those areas can look.

And here is a compilation of all the trailer shots that currently feature water masking (not including those that were removed with the most recent update). They look really great, and let’s hope we will have more of those soon. 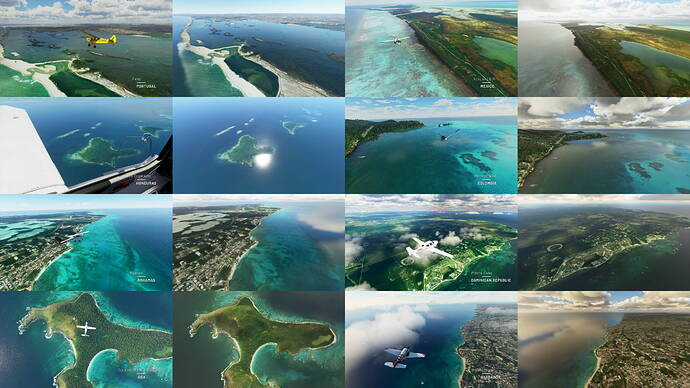