After World Update 5, VFR map does not work properly. Example is Svalbard. If you start a mission from London for example and try to go to Svalbard, the VFR map cannot be panned to view Svalbard. Not only is the VFR map broken, the map in the Navigation Display cannot pan beyond a certain point north of Norway. Can anyone else confirm?

There is an airport on Svalbard but that appears to be the only improvement up there.

Thanks for your replies. I’ve opened a Zendesk ticket on this issue.

Believe it or not, I’m one of the few lucky people in the world to have visited this northernmost city in the world (Longyearbyen). It has some beautiful sceneries and polar bears! Hope these issues are fixed.

Same at BIIS… Amazing that even Asobo can’t figure out what heading to place their own windsock object at… Truth be told, they should have simply removed the heading property of these objects, and no matter what, make them point downwind…

As I was actually moving (haha who would have guessed), Navigraph charts helped me navigate there; so there’s that…

Before Passing PITOL, notice the ND Distance to Waypoint 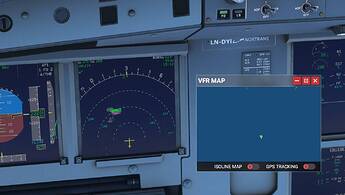 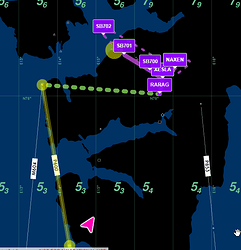 The fact that the VFR map does not work in the polar regions has been a known issue even before the update. I experienced it myself, when I flew from Ivalo to Longyearbyen about three months ago.

No idea why Asobo did not fix it upon release of the world update which officially introduced the airport to the sim (I used a freeware airport back then).

The fact that the VFR map does not work in the polar regions has been a known issue even before the update.

That’s crazy. How the heck can they justify releasing the update with such a glaring bug? I just checked my zendesk ticket on this item and it shows “resolved”. Does that mean the fix will be in the next update? Probably not as the majority of zendesk tickets I’ve opened aren’t fixed and they all show “resolved”.

I actually subscribed to Navigraph because of this back then. Plus I was fed up with ATC keeping me at ridiculous heighth even during approach, only to ask me to drop 20k feet within the last two miles.

I just checked my zendesk ticket on this item and it shows “resolved”. Does that mean the fix will be in the next update?

Do you have any add-ons in your Community folder? If yes, please remove and retest before posting.
Nope, SU5 killed them all.

Are you using Developer Mode or made changes in it?
Never

Brief description of the issue:
Svalbard airport region is entirely absent on the VFR map.

Detail steps to reproduce the issue encountered:
Go to ENSB and wonder what the VFR map does.

Did you submit this to Zendesk? If so, what is your ticket #?
Gave up a long time ago.

I cannot find the link to a post I made, but north and south of a certain latitude like 70 N or 70 S is not displayed on the VFR map. I know as I also cannot get to Alert in Canada or Thule Air Base in Greenland using VFR map. Not sure when they would even attempt to fix it since it seems like a legacy issue as it also happened in older versions of MS Flight Simulator before 2020.