I have a Nividia Geoforce 1650 GPU running Reverb G2 headset and after the recent update using OpenXR toolkit has made things worse for me. Stutters and CTD’s randomly occur as well as I loose audio if I go out of the VR and come back in. Audio for the rest of any flight I’m in doesn’t work, even though I have the sound up to full on all my devices. Nothing works to bring back the sound other than restarting. I updated my Nividia driver to 511.79 and this caused my G2 head set to overheat everytime I was in MSFS2020. I had to revert back to an older driver 479.29 to stop it overheating. Also any airport that has been jazzed up with an update the stuttering I get when on ground or landing in one of these airports is unbearable. Also since installing OpenXR toolkit, on occasions when I open MSFS2020 and it loads to the main screen, everything freezes. I cannot click to start prepping a flight or exit. Have to ctrl alt delete to close via Task manager and restart. These are just some of the issues I have noticed.

Hi @EmeraldPrawn41. Sorry to see this issue is happening for you. I moved your post here to the “Virtual Reality (VR) / Hardware & Performance” category where it is much more likely to be noticed and responded to. I also added the “reverb-g2” and “su8” tags to help with discovery. Hope this helps.

I have read your post and I am concerned about the G2 overheating, I have recently updated the Nvidia driver and my headset failed after a few hours, the headset light did not come on, I had to contact HP to get a new headset.
Out of curiosity had did you know that the headset overheated?

I may revert to an earlier driver.

Nobody else has reported that AFAIK.

I know this might sound like a lazy reply, but so many times I’m hearing “latest update of OpenXR Toolkit caused this and that”, only to hear a few days later “oh in the end it was this driver or that setting [that has nothing to do at all with OpenXR toolkit]”.

It sounds like you are touching (too) many things at once, updating toolkit, updating your drivers, probably changing settings or maybe even getting OS updates… and it could be any of that. Your best chance to investigate is to start eliminating causes one at a time. Maybe that starts with disabling OpenXR Toolkit.

Let me know if you find clues that point to OpenXR Toolkit and we can look together.

I have had my G2 for 4 months or so and it was working fine until I updated the driver. The headset felt really hot to touch and my eyes commenced watering from the heat and everything went blurry after 15 minutes or so. I thought it was the headset so I to called HP and they replaced it. Made no difference until I reverted back to the older driver

Thank you for your reply. I do appreciate it and I understand your view. I have not made any changes to my settings other than increasing my rendering settings to 100% in MSFS as well as OpenXR as the posts recommend to do when using the toolkit and then I scale back to 60% within the toolkit. My driver 479.29 always worked well for me in the past so I don’t think that’s the issue, unless in reinstalling the driver it failed to install cleanly.

The only two things that have changed that I haven’t had on my system is OpenXR toolkit and a replacement Reverb G2 headset. In saying that since the SU8 update I have noticed increased stuttering in VR but no CTD’s. It was until I downloaded OpenXR toolkit and ramped up to 100% I started to get the CTD’s.

I don’t mean to be blaming the OpenXR toolkit, it could be the new headset or just my computer not liking the new settings. If you can assist me with getting the right settings to have a stutter free VR flying experience again I would be very greatful.

This is step 1. Does that solve your issues?

Thanks mbucchia once again. So what I did is remove everything from my community folder and I remove OpenXR toolkit as well. I kept the OpenXR for WMR active and set my render scale to 70% and 75% within MSFS. I updated my driver back to the most recent one (512.15) to see if something else may have caused the overheating of my headset.

I logged into MSFS and wow back to what I was used to prior to the stutters. No further issues with my audio and loading MSFS seemed to be back to normal. Smooth flying and resolution at a level I can live with. Due to the removal of all my community files Oh and the overheating headset issue was at an acceptable level so it wasn’t the driver that caused it to begin with. I am still keen to reintroduce OpenXR toolkit on its own to trial with an empty community folder. I will let you know how I go.

Cool, you are using the correct approach. Re-introduce all things one at a time until you can isolate the one causing the issue!

Thought I would update you on my progress. I have been loving MSFS2020 with no more stutters or CTD’s. The overheating headset still an issue but that is without OpenXR toolkit installed. HP sent me a new cable hoping that would fix the issue but I it didnt. I believe it’s the SU8 update thats causing the overheating issue.

SU9 came in and I got a number of issues again but that was because I had some mods I reintroduced into my community folder. Once I removed them the game is back to normal.

After some real enjoyment yesterday I attempted to reintroduce the OpenXR toolkit. No stutters or CTD’s which is great but I wasn’t satisfied with the graphics. Everything in the distance was really pixelated and shimmering. I may need to tweak my settings. What is your recommendations for my Nividia Geoforce 1650 SUPER? 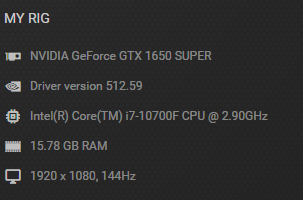