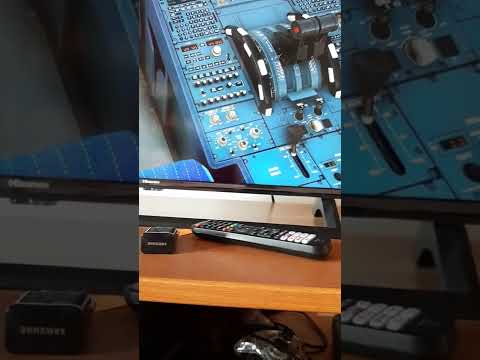 Good day, i would like you to see this video in the link above showing a bug in wich the A320Neo moves itself as in taxi phase with the gear also smoking though its theust and engine is in idle position.

This is not a bug, real a320 neo moves forward on engine idle.

So, i meant, if i put its engin in idle, wich is not forward, nor backward, the plane shouldn’t move. To make it move forward i have to push thrust lever at less 30 degrees forward, backward to pull the thrust lever full back. But if i leave the lever in idke the plane would stay in hold. Houw i would put the lever to stop the plane’s mive when i am at gate or parking?

For pushing backward, you should always use pushback assist, nowadays real commercial jets never use reverse thrust for moving backward.

For moving forward while in taxi, you can use engine idle or a little bit of thrust for getting speed or initial movement. Usually a320 neo taxi in engine idle condition.

For takeoff, you should push the lever for 20-30% and get the engine running (n1) to power up, and then push the thrust livers entirely in TOGA (full power) position, after takeoff, when eng acc (altitude in which we set through perf page for climb initiation) you should put the thrust levers to Climb Position.

These are real commercial aviation practices.

You seem to have some fundamental misunderstanding regarding how turbofan and turbojet engines work. There is no “neutral” like in an automobile. There is only a spectrum of thrust. At idle thrust (better termed as forward-idle), there is still some amount of forward thrust. Whether or not this is enough to generate forward movement of the aircraft is dependent on how much that thrust is (differs by engine, altitude, temperature, etc.) and how much the aircraft weighs (which can vary wildly depending on fuel, cargo, and passenger loads…a loaded airliner weights about twice that of an empty one). In most aircraft it takes a small amount of thrust above idle to get the aircraft moving. Once it’s rolling, idle thrust can oftentimes sustain that movement, assuming the taxiways are relatively level.

Even in reverse-thrust, the engine is still operating the same direction (air comes in the front, is compressed, fuel is introduced, ignition and combustion occur, and hot exhaust gasses are passed through the turbine sections to extract energy for core and fan rotation before being exhausted out the back). In a turbofan engine (every modern airliner), reverse-thrust means that the air passing through the outer fan duct (bypassing the core) is redirected to flow forwards (really more at an angle) through a series of vanes and louvers on the sides of the engine. There are a couple exceptions (the C-17 being one of them) that also redirect the engine core exhaust. This function is usually only used during the landing phase. Aside from the old DC-9 power-backs from the gate, any reverse movement on the ramp is via a tug. And brakes are how you stop the aircraft/hold it in place (along with tire chocks).

Thanks for your answers, i didn’t know these particularities. You are showing me the difference between a flight simulator and a real flight. Infact until yesterday, the A320 Neo didn’t move with thrust lever and engines in idle and i used always to push the lever at 32 - 35% position in taxi phases and first at 50% and after at flex to temp (between CLB and TOGA) detent to make it accelerate and gain altitude.

If you experience yesterday that the A320Neo doesn’t move with idle thrust. Then this is the actual bug, it’s not suppose to behave this way. So the fact that it is now moving forward on idle thrust, means that this bug is already fixed and it’s now working the way it’s suppose to.

Then to start moving forward, you just need to disengage the parking brake, and apply a little bit of thrust just to get it start moving, and pull the throttle back to idle, and enjoy taxiing with idle thrust. You then have to control your speed using the normal toe brakes. If you’re too fast, you apply the toe brake then you release it again when you want to continue taxiing at the desired speed. And so on. This is the correct behaviour, it’s not a bug.

Infact until yesterday, the A320 Neo didn’t move with thrust lever and engines in idle

Differences in weight could explain this. If you’re lighter than you were the last flight, there might be enough positive thrust at idle to move you forward.

CFM leap engines have very high thrust at idle so has others have already said its completely normal and exactly like in real life. The 737 max does the same.

Thanks for your answers to all the forum, but a question is now legittimate due to a new issue occurred yesterday and already reported either via Zendesk and forum: can an APU, only an APU be strong like engines move a tons weight jetluner with engines off?

Also, check whether any slope there at the Ground.