Haven’t played the game for 2 months and now I’m back again. Starting a flight in Australia. Menu screen says thunderstorms. After loading the plane at the airport I get clear weather. I thought they fixed it?

I thought they fixed it?

Nope, come back in a few more months

As long as the weather is halfway close to what I see out my door, I’m happy. With the exception of the partly-thunder issue (now fixed) and the barometric pressure not being imported (might have been MeteoBlue’s fault, also currently fixed), I’ve been happy with the weather.

And this is the type of response that will result in the weather never being fixed and never being “real-time” and “live” as promised.

MS/Asobo may have over-promised, but getting the weather 100% right at every single location in the world is an completely unrealistic expectation. You would need sensors on the ground and airborne at a minimum of 1000’ intervals, and you would need those to have global coverage at about one mile intervals. Even DARPA doesn’t have that. And if they did, the airborne sensors would be a hazard for air traffic. Beyond that, what you have is hourly METAR reports and data from MeteoBlue that taps other sources, such as reading the live network of existing ground sensors and feed from weather satellites.

I never said I wanted 100% correct weather at every single location. What I want is the proper implementation of the weather model (which would be 100% acceptable, if it worked) along with the METAR data that is supposed to be used at the airports when applicable, though I have seen ZERO evidence that they use METAR data in any way, I don’t believe the devs were being truthful when they mentioned that in the last Q&A.

Right now the implementation of Meteoblue’s weather models and METAR data just doesn’t work. Today during 3 hours of flying the wind direction was 180 degrees off from the correct direction, temps were wrong, and the pressure was off by .10in. If Meteoblue’s modeling was that wrong they wouldn’t be in business.

Simply saying you’re happy with weather that is HALF right from what you see when looking outside is terrible acceptance of a broken system, considering weather appearance is one of the least important factors.

But you’re right about Asobo over-promising, that can be seen in nearly every aspect of the game.

OK - so how do you propose they fix what’s “broken?” MB uses a system that divides the globe into 250 million zones 60 layers each that extend from the surface to the stratosphere. Every single zone gets its own forecast data, which is then sent to MS/Asobo. So what you’re seeing in the sim is based on a forecast, derived from the latest data collected. Now, if you ask your local weather man to tell you what the local temperature will be an hour from now, he can probably give you an answer within one degree, and you’d call that accurate. But what about rain? If there’s widespread rain, then his models can probably tell you that it will or won’t be raining right where you’re standing in one hour. But if there are scattered showers, then things get a little harder to predict - even for a seasoned professional. He can give you odds that it might be raining where you’re standing in one hour, but that’s it. This is what MB’s system has to contend with for 15 BILLION individual locations - that 250 million zones with 60 layers each. So… If you want better weather, send your résumé to Basel Switzerland and see if they’ll hire you to help improve their forecast modelling system.

And I just pulled up the latest METAR for KBUY (KGSO is showing smoke in the air for some reason), and compared it to what was reported by the sim. The ONLY difference was a 0.03 variation in the barometer reading. Before I hit the Fly Now button, the small thumbnail was showing clouds, but the sim accurately showed completely clear skies with virtually no wind. I even took the drone out to the wind sock to verify. So yeah, what’s outside my door right now is what the sim is showing.

Yes, it’s all done with 15 billion locations, but the issue regarding being a “broken system” is the airport weather is using the MB model data and not the METAR data. There are many occasions where the airport weather matches the METAR, but this is basically a coincidence for those variables that match. One can see from the MB site the model variables are the ones used in the sim, otherwise every airport would match its METAR every time.

As you mentioned, every zone and layer has the MB model data, but that one zone (or zones if multiple overlap an airport) in the ground layer should have the METAR data and not the MB model data.

I’m happy with how the model data is portrayed in the sim for aloft conditions and ground locations outside of airports, but the airports must match METAR data every time or it makes it impossible to conduct proper flight planning and to use the various third party products that rely on the METAR data being the same in the sim and in the application. That is the point of this thread and not how MB and Asobo slice and dice the weather.

Good job wasting your time posting that. There is nothing wrong with Meteoblue, it’s a problem on Asobo’s side with the injection of it. My in-game weather never matches Meteoblue model data, which I stated multiple times but you seem to have issues reading it.

I’ll type it again since you don’t seem to be grasping it. If the game used simply Meteoblue model data in the sim I would be fine with it because 9 times out of 10 it would be nearly identical to whatever the METAR data was showing because weather modeling is pretty spot on in regards to wind, temp, pressure, etc. The problem I and many others have is that whatever the hell weather we’re getting in-game, sure doesn’t represent any sort of model put out by Meteoblue and often represents weather in the past or future.

Glad you’re happy with it, but you being happy doesn’t suddenly make the wind in my game switch 180 degrees to represent reality, and what the models show. 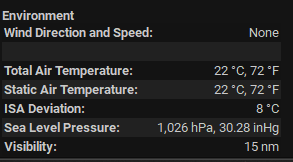 Not bad, but calm winds is easy, only .02 off with pressure which is much closer than what I’m used to and perfectly acceptable. Temps are laughable.

And my home airport, outside my door. 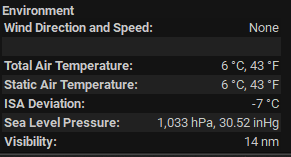 Seems like it can manage calm winds, but the rest? Not acceptable. Meteoblue model data matches reality, and not what is represented in-game.

Here is one that isn’t even close to being correct in the sim:

We know the sim can’t handle fog, but >20 nm visibility? 7kt wind when it should be calm and 14C instead of 0C. The closest is pressure and that doesn’t match.

As I said before, if there is a match, it’s probably a coincidence or perhaps the weather doesn’t vary much in that location.

I’m not saying this is the fix but ill tell you what worked for me. I deleted my rolling cache and then I “left it off”. After that, my live weather is loading every flight and other things have also improved. Worth a try, if it don’t work for you, then its easy to revert.

I only get real weather once after sim start, sometimes twice when i switch departure points but that doesn’t always work. What does work more reliably though is having multiplayer activated cuz it forces us to be on the same page weather wise. Whether it is real weather or not i can’t say but it is definately not a preset and that’s what is important to me.

Fair weather thunder isn’t fixed. It’s just less prevalent. I can still easily find it on any given session. 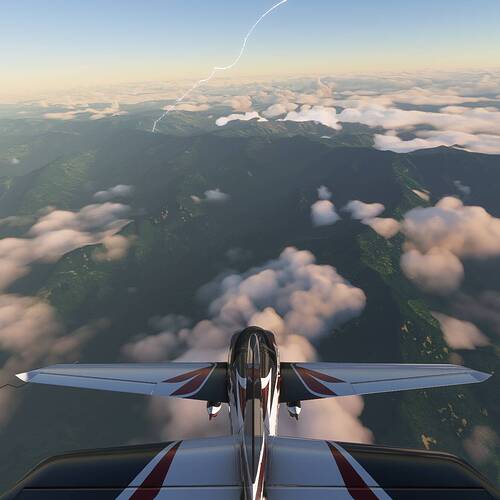 but getting the weather 100% right at every single location in the world is an completely unrealistic expectation.

Well…firstly, no it isn’t. Secondly, I’ll be very happy to settle for every METAR in the world being correct. Since we’re just talking about data…which all exists, we’re not talking about a fantasy data source the salesman promised big data and Tableau would magically create all by itself…I don’t see a reason why that would be an unrealistic expectation?

And personally, I’d be happy if ‘heavy rain’ in live weather was the same as heavy rain in the preset.

I’m starting to think, like many things that were promised, that the “live” and “real-time” weather feature that was promoted is extremely half baked and whatever is included, isn’t even remotely capable of producing “live” weather. Things like the devs stating that airports use METAR data for weather and having never seen ANYONE show any sort of proof of that does make me worry a bit. Either they are being untruthful or they don’t really know how their own game works.

I had a odd issue. I was at KSAN with fog the altimeter was set at 27.8 which set the plane about 1200 below sea level. Turned off live weather and it set to 29.92. First time this happen