Weather radar should only show precipitation, not clouds

I know this has been reported many times, but I don’t think this has been acknowledged by Asobo. Weather radar should only show precipitation, not clouds. The way the radar is operating at the moment is completely useless, please fix this!
Thx

Radar ! when are we going to have nice usefull radar
Wish list items that are rather critical
Can we get an Update on When We Will Have Weather Radar that Works?
Weather Radars only Display Cloud Intensity, Not Precipitation
Weather Radar Returns
cooljay113 April 7, 2021, 6:23am #3

One thing I’ve noticed is that both the Nexrad radar which uses the ground based radar sites and the data is sent to the unit, and the on-board radar systems are returning the radar reflections based on the clouds that are present and not the actual rain.

For example right now I’m sitting at Lemhi county airport in Idaho where there is a small storm near the airport to the north. This is what the in game G1000 is showing as weather for the area: 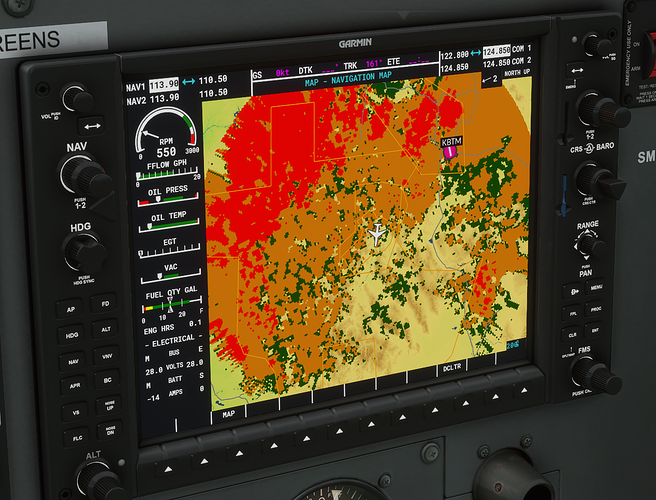 Here is what the real world nexrad for the area looks like, Lemhi county airport is located in Salmon.

Now before everyone starts jumping in here and saying it isn’t real world weather and it won’t match perfect to real world weather and radar that IS NOT the point I am making here. The point is that the in game weather radar system is broken in that instead of only returning reflections from rain etc. it’s returning reflections based off the cloud cover and not precipitation.

Yes I will file a bug ticket and hope it gets fixed at some point.

I agree with you. An even more plus if the radar is really simulated, meaning that a big storm hides other storms / rain behind it.

no thunders no precipitation is showing on real weather (only preset weather working) small effect on glasses only some times. I compare a lot of times and different places with real live weather models and forecast.

I have noticed this too. It definitely is showing cloud data and not precipitation data.

Anyone already reported this ?

I know there is much more serous issues that has to be fixed first, however the idea behind working radar in the sim is great but the implementation of it doesn’t work like actual radar is.
In the picture below you can see that the NexRad picking up clouds rather then areas of precipitation.
Another issue is that the color is Orange, that usually indicate moderate~ precipitation (some radars doesn’t have orange but yellow or red).

I wish ASOBO fixed that issue and dmade the radar show only areas with active rain levels and not just draw clouds on the radar. That’s not how actual radar works.

If we vote for it and request it I hope they will listen and implement this idea. 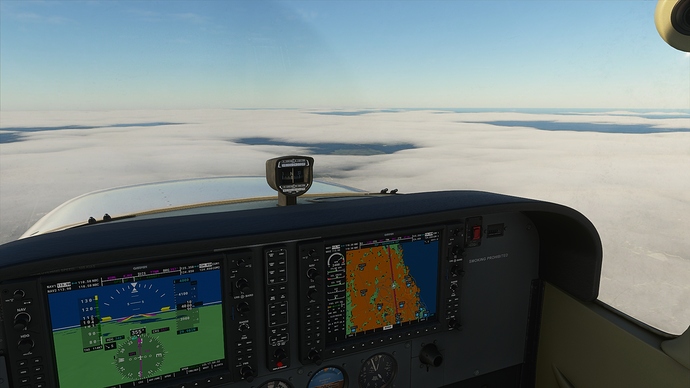 I definitely agree with this idea. Right now I’m not using the weather radar / nexrad at all because it’s just cluttering the map and has too many “false positives”.

Onboard weather radar seems to produce returns for just clouds for me. I understand clouds often contain actual precipitation which will not reach the ground but it seems like every cloud produces a very strong return on the onboard radar. Monitoring the onboard weather radar in the scattered clouds weather preset produces a strong (red) return on radar for most of the clouds, which seems too sensitive to me.

Cool, sounds like we’re seeing the same “bug” then. I was concerned we were seeing vastly different performance of onboard radar between our two installations.

I have no clue how the internal sim data on moisture/precipitation is translated to the onboard weather radar but it would be a neat fix to include some sort of gain adjustment on the weather radar. Depending on how many levels of information the sim has on current precipitation, it could allow for a pretty accurate and realistic modeling of how radar actually works. I have no clue how it is in actual aircraft, but I would assume they have some ability to adjust onboard radar gain.

For example, I know NEXRAD has at least two gain modes that the radar receivers automatically switch between when in clear weather mode or detecting stronger precipitation. Clear weather mode in NEXRAD is often sensitive enough to detect bugs and birds, though it usually can’t see clouds, even at higher tilt angles. I would guess that the current onboard radar simulates a very powerful radar with high gain, whereas I expect most onboard systems don’t have the detection capability to see clouds, and thus should have lower gain.

I dug around a bit in the sim files for the weather radar features, but it appears that there are no configurable parameters for the radar display. The display is simply on or off. Looks like it would have to be an Asobo fix.

I concur with the above assessment in that it appears to be a cloud radar rather than a precip radar.

Flying several hurricanes recently this was obvious in the TBM where you can switch between “NEXRAD” and the vertical/horizontal modes. Was actually useful to find moats/voids in the cloud but realistic? Nope.

On the plus side, signal attenuation at longer ranges does look to work well.

what plane has weather radar? I need to use a320nx mod for weather to work on the radar.

For the moment even a320nx mod by flybywire the weather radar is not working correctly.

On default when I turn on radar , nothing shows.

You too? Unless I am doing something wrong.

Weather radar returns in MSFS are totally unrealistic, if there are some clouds here and there the whole weather radar display immediately turns completely orange, red and magenta.

A weather radar is NOT able to detect clouds, snow and ice / hail as those are poor radar reflectors, or at least these will not produce any strong radar returns. Only precipitation in liquid form is able to produce those strong returns. Often the radar is showing returns without any precipitation present.

Also it is impossible to properly operate a weather radar without tilt control, so what tilt is the MSFS weather radar using? With a normal weather radar beam width with a tilt set on the horizon the radar will be showing ground returns until high altitude, depending on disc size and EFIS range used.

The weather radar that comes standard with all aircraft only shows cloud height; it doesn’t actually display precipitation if there is any. Effectively, if you turn the weather radar on, all you see is a mess of red: 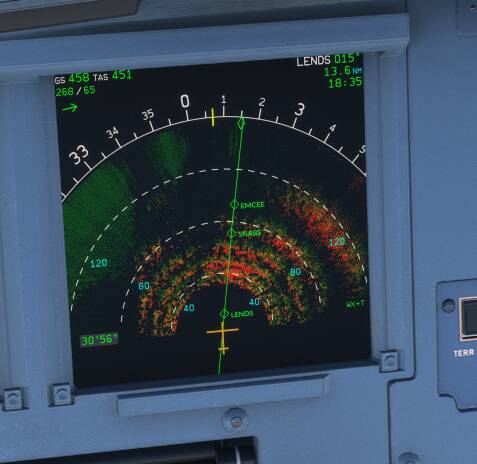 Weather radar returns should only show the precipitation, not the clouds. In fact, what makes it useful is its ability to see precipitation through clouds.

I mentioned this in some thread here some time ago, and was told that it is nothing new. I’m not sure if that means to MSFS, flight sims in general, GA radar in general, or just radars without gain controls, but that is what I was told.

Have some questions or ideas? Please check out the FAQ page first!