Seminole: Good fun, but for whatever reason don’t use it that often.

Piper Arrow: Could very well end up being my favorite in short order…feels so good to fly. Only issue right now is the the keybinds don’t play nice with the alpha and bravo since the “toggle” option of each one needs to be used and Msfs detects it as a continuous push which is extremely annoying. Hopefully JustFlight can fix that soon. Otherwise, fantastic fun.

I have all of them. Here is my quick take.

edit: june 2021
Just look at the posts by BostonJeremy77

The piper just flight is way over powered on takeoff. 30 feet and up 1400fpm

I ended up buying every aircraft that’s available in the Marketplace.

I think my favorite experience so far is the Bleriot XI package from Wings42. It’s fun and terrifying, all at the same time, and it really makes you appreciate how much we owe the pioneers. I wrote a review for it here: Bleirot XI: Initial Thoughts.

But even if you don’t like the aircraft themselves (plural, as there are three differerent variants), in the documentation you get a 40-page book in PDF format that by itself is worth the purchase price, in my opinion. The only weird thing is that the fuel/payload menu allows you to change the engine weight. You’d think this would be incorporated in the aircraft’s empty weight, but no…

Honorable mention goes to Carenado’s Piper Seminole. Everything about it reminds me of my dad’s old 1966 Ford Mustang. If you’ve ever gotten an opportunity to get familiar with an old car like that, this is basically the airplane equivalent in my opinion. Just a not-much-to-it-but-still-powerful-and-fun kind of feeling, ya know?

I also love their offerings on the Mooney, CT182T, and Arrow, but this is special to me. I have the Waco but haven’t flown it much. It’s not a bad little plane, from what little I’ve seen, it’s just still on my to-do list.

DC Designs’ F-15 is kinda fun. Don’t try to fly it with a keyboard though, the controls are pretty unresponsive that way, this aircraft is what convinced me to break down and order an Xbox controller.

I’ve seen a bunch of people complain about the Eurofighter but honestly I don’t know what’s supposedly wrong with it. Haven’t flown it much, but maybe I should, just to see what all the fuss is about. Ditto for the Kitfox.

IndiaFoxtrotEcho MB-339 is cool, I’m glad I have it. Hopefully practicing with this will help me get a handle on the raw power of the fighter jets. Long EZ is nice. Long-legged, high flyer, as it should be. Not much to it, very simple. I like to leave the copilot to fly it if I’ve got a long cruise ahead, and come back around sunset to watch the stars come out. Just got the Goshawk. Not sure what to make of it yet, but no glaring issues from what I can see.

I love the Jabiru family. I haven’t tried the bushtrips but I appreciate all the customization options that come with the in-cockpit tablet.

The Aerolite 103 is one I haven’t flown much of. Haven’t even logged a landing in it yet, but plenty of circling around a few local airstrips. I tend to overstress it.

Simworks Studios Zenith CH701: Genuinely amazed at the short-field performance in this thing. I’ve never even heard of this manufacturer/model so I can’t attest to the quality of the simulation, but I’ve had a good time in it, especially cruising over the Rockies where the peaks sometimes exceed the maximum certified operating altitude.

Well ■■■■, I’ve really got nothing to add that BostonJeremy77 hasn’t said, as I think he’s right on the money.

In order of purchase:

Literally the first thought was…WEEEE!!! Lol Flies and handles great. Lots of fun to buzz the tree tops at 300 kts. A few of the systems are still a bit buggy or just not implemented, missing some effects, but that may be out of their hands ATM.

Grabbed these while they were on sale around Christmas.

Love the Mooney for the most part. You can fly it fast, you can fly it slow. Looks great. I do find it quite jittery in the controls, like the default planes. But overall no regrets, just hoping for an update. This is why I’ll probably never buy off the marketplace again. If it wasn’t encrypted, it would have been modded to perfection by now.

I never fly the 182. It’s ok I guess, I’m just not a fan of glass cockpits, so that’s really on me. Other than that it’s ok I guess. Its another Cessna, just a bit bigger and faster. But like all Carenado, they seem to focus on how it looks, not how it flies.

2 small gripes about their planes, the sun visor moves and that’s great, but it’s either one way or the other. You can’t position it where you want. It sounds silly, but is actually useful. And if you open the window the plane crashes, even if you’re below the speed the little sticker says to not open the window.

Awesome plane. Looks and sounds amazing. Especially when you drop the rpm down just over/around 2500. You really hear that growl.

Not thrilled with the flight model though. Very hard to takeoff, it wants to turn left hard while rolling to the right. In the air it just seems overly jittery and cartoonish, again like default planes. But, still a great addition.

This one has quickly become my favorite. I find the flight model superb. First plane to not feel like a cartoon game. It’s not jittery, you can almost actually feel the weight. Everything in the cockpit works. Windows, doors, adjustable sun visor. You can fly with the window open. Working circuit breakers. The details are tops. For example the engine sound when you open the window, is different from the one when you open the door. There’s only a few buggy things, but they’re minor. The autopilot needs some tweaking. Something odd with the transponder. That’s about it. Lol looking forward to more from Just Flight.

Bredock and mscenery…i don’t have them, but nothing but bad all over the forums.

Great post by the way. I haven’t bought any yet- I didn’t realize that marketplace aircraft can’t be modded.

All mine were bought ‘outside’ the sim.
So an excellent Bleriot xi from Wing 42 - a real test of flying especially the most accurate RIP version with the 25Hp Anzani engine. And great fun because of that (I got mine to 700 whole feet above Old Warden after flying just over fences and around fields dodging trees).
Also the excellent Spitfire 9 from Flying Iron. (I am seeing ever more of them in sim now ‘Tally Ho’).
From Flightsim.to I also have
The EC135 - now flies not too bad but still under development and fighting ASOBO dynamics so cut it some slack. The first helicopter in MSFS
An Edgley Optica - ideal for exploring with its heli-like cockpit.
A Super Etendard - also not final version yet and with a ‘bug’ that uses up one small tank first (I have researched & modded fuel system - not tested until later today).
A Tiger Moth - nice 3d model, nice accurate flying (easy to fly but harder to fly accurately - just like the real thing)
And last but not least in any way - a North American P51 (it had weird landing gear dynamics so i modded it to as close real world as I can research - much better).

The Spitfire has some questionable undercarriage dynamics. Using many books and restoration photos I determined the actual static & dynamic compressions, guessed damping ratios and so forth. Much less weird behaviour on mine now (but the real thing suffered P effects and torque effects and that narrow U/C of course anyway - just not so wallowy as that one.
Flying should = light pitch & roll with ‘hardening up’ & reduction of response at high speed. I actually upped the aileron gain a tad. It has a realistic spin that becomes stable but probably can pull a bit too much of a tight turn before the high alph a gets it stalling. Still very nice though.

I have to admit that I keep an eye out for your posts before I take the plunge on buying any aircraft now. Keep doing what you’re doing!

Out of curiosity, what are your top 3 GA inclusive of the default planes (including any third party mods such as the TBM mod)?

Top 3 GA in no particular order:

So you got a turboprop, a fast single-engine, and a slow single-engine. Sometimes the Seminole can be used interchangeably with Mooney.

Honorable mention: Stock Baron G58, BushLeagueLegends X-Cub variants, Savage Grravel… come on!! Not fair to do just 3. But those are the ones I want to fly most often.

Purchased the IndiaFoxtEcho T-45C Goshawk, the sound is terrible and the graphics look all blurred, sorry I bought it, it’s not ready for release. Guess I’m spoiled by the FlyingIron Spitfire which is magnificent in every way.

I don’t know what you are talking about - I think the graphics are great. If you mean the HUD, that’s a known issue and changing AA method will fix that. The sound does need work and it’s slated for the upcoming update.

These keys look blurry to me 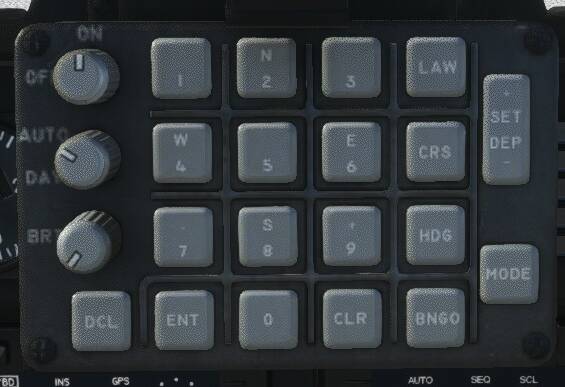 Those are a pretty small detail, I guess. Everything else looks pretty good to me.

Jeremy’s tested all of them lol but here are the ones I own:

-Mooney M20R Ovation. Use very frequently on VATSIM with the GNS530 mod. Great visuals, details, performance and overall one of the best from Carenado.

-ATSim Cri-Cri. OK, beta tested for it and its decent. Flight model is still a weeee bit wonky but I suppose that’s how it is IRL too. Don’t fly it often

-FlyingIron Spitfire IX. Beautiful, passionate devs, great sounds, PHENOMENAL textures and modeling, accurate specs and performance. Pretty much perfect. Highly recommend, probably the best payware I own, since I don’t have the JF PA-28 (although I sorely want it!)

I actually like the BREDOK3D 737 Max. A lot leaves to be desired about the cockpit, but is the same horrendous problem with the 747 and the 787, I just like flying 737
(because that is what I liked in P3D/PMDG)

I think even the BREDOK3D 737 Max does the job a tad better than the present - horrible - 747 and 787 (this is a compliment), and the lot of default planes that I tried,

but for perhaps the Beech 58 now after the Sim3 Update, that now flies excellent, Longitude that flies ok,
and for instance the King 350 I find just a horrible mess, the Diamond DA62 is ok-ish but somehow boring.
The little planes - Cessna’s etc. - are ok I suppose (already from FS2000 or so), but I don’t fly these (anymore).

The big thing about MSFS is its weather and the scenery generation, it’s planes, disappointing but for the little steam gauges, and PDMG is at least a year away.

Wow great breakdown. The ones I own feel the same way.

The only one I wasted my money on is the Eurofighter. JUNK…

The only paid-for third party aircraft I own is the Bleriot XI. As BostonJeremy77 says above, it is ‘special’. Unstable, underpowered, and entirely lacking in everything that makes a modern aircraft (or indeed almost any aircraft built in the last hundred years) a pleasure to fly. Which is why I enjoy flying it. Aviation in its most basic form, when getting airborne at all was an accomplishment, and actually going anywhere was utter recklessness.

Highly recommended, if only to put some perspective on how far aviation has come.