Brief description of the issue:
We just had SU VII, enhancing Australia. Nevertheless, it seems that the city of Darwin, Northern Territories, is missing. To make sure, I checked Google. The coastline and estuary where Darwin is located are well-rendered, but there is nothing but wilderness on the peninsula where the city os supposed to be. How is this possible?
Location of issue:
Australia
Provide Screenshot(s)/video(s) of the issue encountered:
Unnecessary
Detail steps to reproduce the issue encountered:

PC specs and/or peripheral set up of relevant:
Not relevant
Build Version # when you first started experiencing this issue:1.22.2,0

I arrived in Darwin this afternoon, using the latest update. After landing I had a look around with the drone and was disappointed with the quality, given that it was supposed to have been “worked on”. I usually have photogrammetry switched on but frankly it was terrible so I turned it off, which improved things a bit. There were plenty of buildings etc. around so not a wilderness, but I don’t know what I should have been seeing. Can’t say if it was a “city” or not as it’s the first habitation I’ve seen in Australia.

So I exited and loaded a third-party addon which was for the airport but as usual also included a couple of miles around. This was much, much better but obviously not complete coverage.

Darwin is there, so I don’t know why you could not see it. I presume you’ve tried the usual tricks, empty the Community Folder and clear the rolling cache. Not something I’ve ever heard of before.

Lots of Darwin there 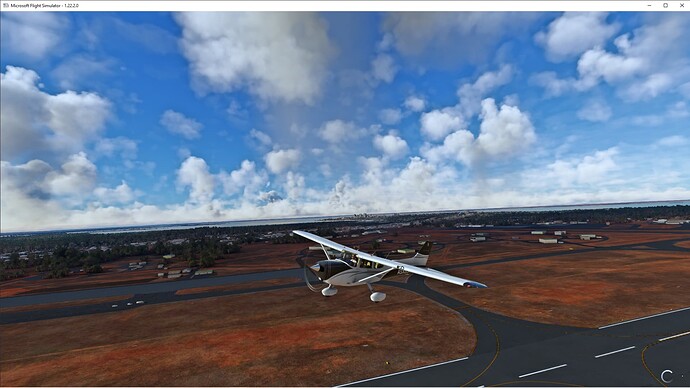 No. I just screwed up. Following the coastline from the south, I was searching in vain on the wrong peninsula. Darwin was there tonight.

See my reply to the other post. My bad.