What aircraft are you excited for in the 40th Anniversary Edition?

What aircraft are you excited about for in the 40th anniversary?

I am excited for the A310-the first free study-level aircraft, and the DC-3

well the inibuilds Airbus A310… I have that in Xplane and its a beautifully created aircraft.

I’d say getting a top-level add-on such as the inibuilds A310 for free is pretty unexpected!

Wasn’t expecting MSAsobo to ever release another airliner given that 3rd parties are producing much better stuff.

I am personally most excited for the De Havilland Beaver! I watch those planes take off and land when I visit Lake Union in Seattle and I’m dying to flying in one soon. I will love flying it in the sim.

Hmmm… Interesting. I will give it a try

Its funny , there was a guy on the west side of the lake just north of where my boat dock was. He always flew overhead like 3 times scaring boaters away from “his” landing area. Surprised he never hit anything, theres a sand bar there too and the water had spots only a foot deep. Still a trip seeing him land there.

I agree with @KayakSailor4- those three I am as well interested in. Looking forward to this update!

I searched by “heliport” and came up empty

I think the real question is, will we be able to create heliports on any given building? (IOW. add an altitude to a hard landing surface so it looks like it’s on top of a building).

Here is our first heliport lol 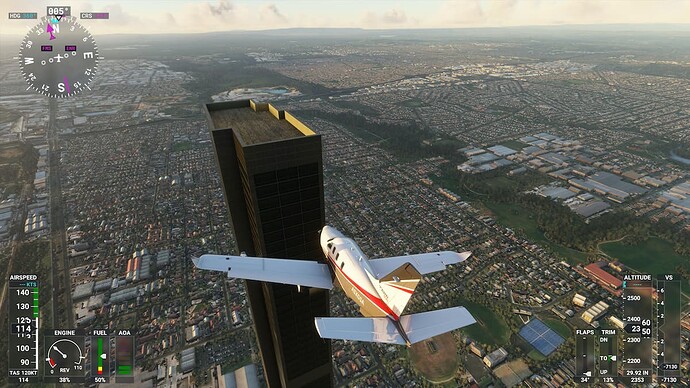 Last month I took a flightseeing tour back through the Misty Fjords outside Ketchikan, Alaska. The owner/pilot is a woman who has been flying there for 40 years. Island Wings - check it out! We were in the same model of DeHavilland Beaver that is coming with the 40th Anniversary Edition. There were five passengers and I was lucky enough to sit in the co-pilot seat the whole 2-hour flight. I’m looking forward to re-creating that flight in the Beaver!

While I’ve plugged for it in other discussions, I’m most interested in the Bell 407 of the 40th anniversary aircraft. When I was growing up, there were lots of Bell 206 family variants flying around the area (police, news, life-flight, etc.), and, being an aviation geek, I had always stopped to look up and thought it would be cool to fly one of those. While I decided to go into fixed-wing aviation/tactical jets IRL (my eyes required me to be an NFO and not a pilot in the Navy), I enjoyed flying the 206 in the previous versions of MSFS. As the 206 has gone out of production, the 407 is kind of the more powerful and more advanced sibling that continues to get new things to try in it.

While I’ve mainly flown around in the sim in the Longitude and the F/A-18E, I’ve wanted to do more VFR sightseeing in the sim, and, while it’s easy to get to interesting places in those jets, it’s harder to really look at things on the ground once you’re there without pausing and using the drone cam. I’ve been waiting for the helicopters in general to come out to fill that gap from hovering to ~130-150 knots to tour some interesting locales.

We had a Skycrane, Piasaki, Super Stallion, Blackhawk, Chinook, and about 2 dozen more, and with the sling-load capability, Navy Carrier UnReps (underway replenishment) and other uses - helicopters add an entirely new dimension to flight sim apart from the fixed wing flying.
With multi-player, moving dynamic carriers, and helicopters, the whole MSFS experience is expanded significantly.
I know no one has yet officially announced when we might see the moving dynamic carriers added to MSFS as free-flight objects but I suppose it could be soon enough…
Add the firefighting aspect with water dumps, SAR missions, and so on and there’s a lot to be excited about.