What could I be doing wrong?

Things didn’t go well when I took my Carenado P-44 Seminole out for the first time, or the second time (despite running through all pre flight procedures whilst following a YouTube video showing the process and take off.)

It all starts when building up speed on the runway with a massive amount of ‘pull’ to the left. If I manage to fight it into the air I have to pull all the way to the right on my stick and give it full rudder to stop it rolling and diving back towards the ground. I checked both elevator and rudder trim before take off and both were set to neutral/take off position within the game whilst my physical controls are all set up correctly and work perfectly well with all the default aircraft, plus the PA28 MkIII (and IV) as well as the BN Islander. I tested both the PA28 mkIII, the default C152 and the Islander afterwards and all worked perfectly.

I can only think that I’ve overlooked something obvious (and that wasn’t mentioned in the video I watched) or that there’s a fundamental issue with my understanding of the aircraft and what I need to do as I build up speed. I’m used to adding a little rudder as I go down the runway to counteract the propeller but this was vastly more aggressive.

Would anyone have any ideas of what I may have missed, what I could double check, what everyone else knows about the Seminole except me (

) or even a good resource on flight characteristics and/or flight tutorials?

From a newb in need - thanks

I moved this to Third Party Aircraft.

Thanks @Beechc23 - still finding my way around the forum.

It all starts when building up speed on the runway with a massive amount of ‘pull’ to the left.

That would be entirely normal for a single engine aircraft. For twins, I honestly don’t know whether counter rotating props are simulated, to counter engine torque. This is where I end up testing my own knowledge here, so if I get something wrong someone far more knowledgeable than I will correct me.

As you increase the throttle the clockwise rotating prop causes the aircraft to want to rotate in the opposite direction. This forces the left main gear wheel down harder, increasing drag which causes the plane to yaw to the left. Less throttle, less yaw.

On rotation, as you pull up you are then affected by P-Factor. As the propellers angle of attack increases, the downward moving blade, on the right is moving faster than the blade coming up. That increases lift, and again causes yaw to the left.

Then there is spiral slipstream, where a spiral vortex of wind hits the left of the vertical stabiliser, and again more yaw to the left. 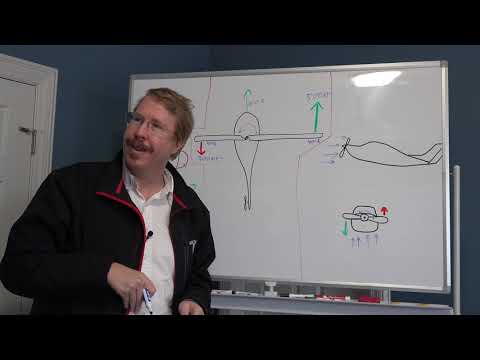 I honestly couldn’t tell you how much of that is mitigated by a twin engine aircraft with counter rotating props.

It could also be a left crosswind, and the plane is weathervaning into the wind, rotating about the main gear.

You may have also noticed a bit of a lurch as you increase speed. This is an issue highlighted by another user, @Alec246, where the crosswind component is 0 while the aircraft is stationary, and according to the question I asked at the last Dev Q&A, when the aircraft reaches 10m/s, the crosswind builds up to its full strength. The assumed reason for this was borne out I believe, and that they haven’t figured out how to stop the wind blowing the aircraft to the side when it isn’t moving, so they turned it off entirely while stationary, and it builds as you accelerate to 10m/s. Indeed I have personally experienced a parked Cessna Grand Caravan parked side on to a hill slowly move sideways up the hill, thumbing its nose at physics!

It might also be worth calibrating your joystick/yoke/controller. I started a flight in the DC-6 the other day and noticed I was hard over to port on the controls, a quick disconnect and reconnect of the device and windows calibration sorted it.

Alternatively could be related to things in the previous post.

Maybe try some of the assists, check the flight model settings (modern) etc.

Might also be worth checking that your flight model in the sim is set to Modern and not Legacy.

I’ll double check I’m not in legacy mode but having seen other posts about it, and the fact other aircraft are fine, I think I should be in modern mode.

Good point about my joystick. It certainly was calibrated but something may have gone awry when using the Seminole…it’s worth checking.

Part of the reason, possibly incorrectly, of me buying the Seminole was the prop setup and it supposedly being fairly easy to fly. I hadn’t actually thought about whether the sim itself can accurately simulate all or certain forces/effects.

I may also need to research the full effects of having certain aids switched on. Rudder and Yaw assistance on take-off may either be a hindrance or a help depending on whether I know exactly what assistance they’re offering - I don’t at the moment.

I knew full well they’d be a steep learning curve for someone of my knowledge and experience but the frustration and lack of understanding when you’ve got so far and then appear to take several steps back is as strong as it ever is.

Thanks for the suggestions, I’ll continue investigating and take on what you’ve all said.

Maybe the left fuel tank is full and the right one empty. That happened to me the other day.