What has Asobo done so far for sim cockpit builders?

Yes you have a point. After all they changed the UI to cater for the majority of players so that menu and interaction text can be read on a TV 3m away and interacted with using a single hand held gamepad.

They must chase the larger target audience.

I’ve built 5 static simulators since FSX. Now, my latest build was prepared with investments of many dollars in anticipation of what was believed to be an even better simulator, all around. It was a huge disappointment for hard-core builders to come to the realization that it may never be the same for us

I discovered VR and haven’t looked back!
I can use most my peripherals too.
My YAW2 chair is on order, and that’ll be it for me in my retirement 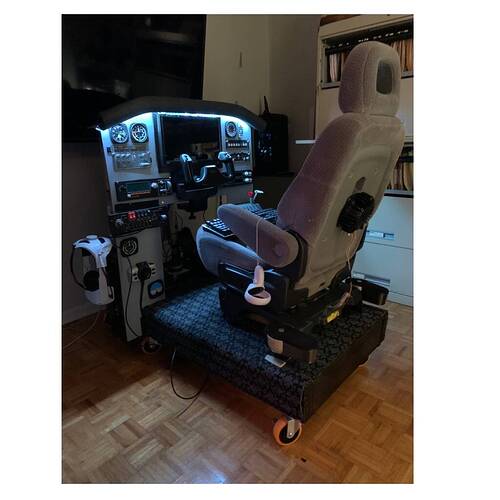 Before i begin i have to say that all of my comments based on IFR flying with Boeing Planes.

I was flying with FSX until 32-bit problem became an inhibiting factor.
I switched to X-plane 10 then X-plane 11. Flying was good but that stupid fun factor was better in FSX for me. (FSPassengers, PMDG plane, Ground SErvices etc., ATC)
Then they announced MSFS! pre-ordered Digital Hyper Ultra Mega Deluxe Fancy Pants Edition (the one with 787) whatever it is called. Scenery awesome, everything good, it will improve. Still waiting… 1 year passed from the release, from my point of view nothing improved except FPS numbers i see.
I cannot use Tiller system, i cannot use seperate axis for reversers, i am ok with default atc but my controllers have problem with my altitutde :D. Microsoft is a huge company, Asobo is not a company with 20 people in it. Unacceptalbe. We are in 2021 i still go to my *.cfg file to change my LOD and change 1’s to 0’s to remove grain effect… Unacceptable.

Now today i am reading about X-plane 12 and all of the improvements it is going to bring. Also just read about Flight Factors new 777 which you can even do a walkaround and visually do checks to avoid failures.

Then in here, we are discussing when multimonitor support going to come, which SU or WU broke the game in a title where name has the word “Simulator”.

My personal opinion, this piece of software needs to reach “simulator” standards first, then we can move further. Probably VFR and Airbus users are happy, but as i already wrote when i begin, i am a boeing user and i agree what autey111 wrote up there “Nothing”

I agree, Next year (Maybe).
and… It, probably, will not be visually correct for 2 screens of equal size and resolution when it is released. They will, probably, have to “Fix It” like so many things in the core program are subject to being fixed now a year after release. Needless to say, I am not optimistic. The driving force remains “Corporate $$$”

What I want is a companion app that I can install on my tablet or phone and that connects directly to the simulator through the local wireless network.

This app then automatically mirrors a plane MFD. No fuzz, no extras, just that. No need for 3rd party apps, multi screen solutions or anything else.

If they do it properly and give us viewports (like in XP) vs the ability to scale across multiple screens, it should work regardless of the resolution / size of side monitors.

But that’s assuming they do it right.

HI Crunch…
Well, I sure hope they do it right the first time around. That will be a miracle !

I’m not a betting man, but I would wager that we’ll still be having this exact conversation this time next year.

Hi Crunch,
Yes, I agree. We will. See you again in 22 regarding this same topic.

I try to do serious flight simming

I have a full blow home cockpit with countless saitek and goflight panels and instruments and what not, all made useless with two simple letters - VR.
So throw away your home cockpit and get a Reverb G2. You can’t get a more serious flight simming experience than that.

thank you for the tipp, but i‘m sick and tired of doing research for some 3rd party solutions. I require a clean insim solution for my money😉

This sounds terribly entitled to me, you know everything you mentioned is in development, yet you don’t want to wait, you want it right now.

Truth is support for home cockpits is not a high priority, very few people have them in the grand scope of things, and thus, you will have to wait until more important issues are fixed and other features implemented. If you do not want to wait, you always have the option to use a different sim for now, or use a Reverb G2 and save a ton of money.

But it is a good reference for how multi-monitor support should work.

My YAW2 chair is on order

…XPlane is not a good reference

I know exactly how to use nVidia Surround, as do those of us requesting proper multi-monitor support. We also know exactly what the problems with using it are. It’s quite clear that you, however, don’t understand its effect on the sim and why we need multiple viewports for different angles, or you wouldn’t be arguing that nVidia Surround is a viable solution. It isn’t. Never has been, never will be. It wasn’t for X-Plane either. That’s why they added multiple viewports for multiple monitors. nVidia surround just doesn’t work. And they did a great job of that feature in XP. It should indeed be a model after which Asobo model and build their own.

I would kindly and respectfully recommend that before pontificating on a topic that you actually look into it first and understand the details of what you’re talking about.

nVidia surround just doesn’t work. And they did a great job of that feature in XP.

XPlane is not a good reference. The surround view is ready on your PC with XPlane, that does not count for the surround view in MSFS, that is downloaded. Also I never advocated any NVidia tricks, in the quote I call that “vanilla”. Please don’t put words in my mouth.