What is the status on Sim Functionality for Complex Airliners?

Over the last several weeks/month, some prominent airliner developers have asked MS Asobo to incorporate necessary fixes/features in order for their planes to go live to the public.
(ie PMDG 737, FBW weather radar and terrain, etc).

What is the status on these requests? Several of us feel the sim is desperately in need of good airline models but according to the 3rd party devs, the sim needs updating before that can happen.

Also, what’s the update on Jorg promising to unlock the 787 so Modders can enhance it, like they do with the 747 and A320?

Maybe additional to that question:

“Is there a possibility that Asobo in the future opens the plattform to allow 3rd party devs better and smoother development? The sim lives and dies with the complex aircrafts and other tools coming from certain developers.”

Why is everything just about the xbox?

I suggest turning to sites such as FSElite and Threshold to keep on top of what is going on with third-parties.

I follow the two sites and the forums, but there are no dates yet!

And with these updates that have to go out fixing each addon, I don’t think anyone will release it anytime soon!

This seems a bit duplicative to the other thread, see below:

What is the status on Sim Functionality for Complex Airliners? Dev Q&A: Open for Questions

Why is everything just about the xbox? When are you going to start giving importance to big developers like PMDG, Qualitywings, FSLabs, FSDream Team (GSX), Activie Sky, TFDI, etc?

As I communicate with some vendor people. The unofficial word is, when “Asobo/MS stop mucking with the base code of the sim and keep things static” That is because every update breaks something and causes the developers to have to go back rewrite code and release update. That costs money especially if small developer. The bigger shops aint going to waste money having to reinvent wheel every WU and SU Asobo releases. My guess is, that is when things will happen.

Topic merged along with 5 votes.

I absolutely agree with @moxiejeff and his post! Here is a reply that PMDG made on their official forums today. This screams problems. Come on Asobo, we need an answer to this! 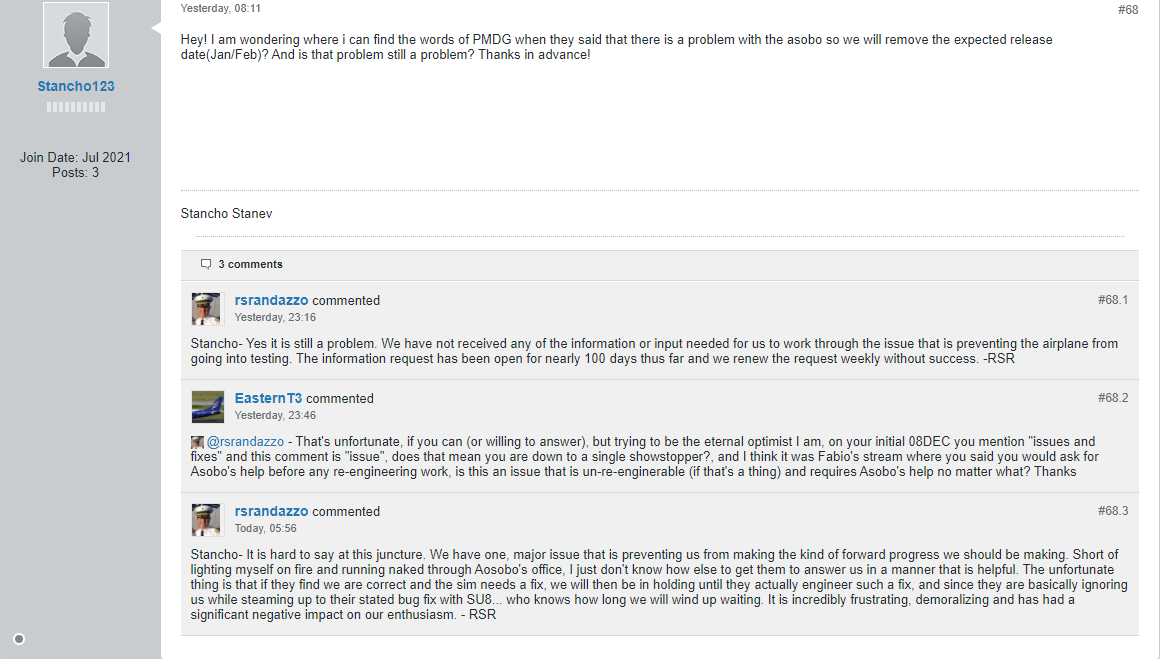 I still maintain that for me MSFS is the best out of the box sim I’ve used, but the continually growth of the sim relies heavily on the release of 3rd party aircraft especially the good ones from PMDG/Fenix/A2A etc. It’s quite unsettling that Asobo has failed to respond to PMDG in 100 days, considering the close partnership both sides have described. I understand more than most the business/political side of the sim with Microsoft, and SU8 sounds great but I think Asobo/MS need to understand that helping 3PDs will actually benefit the sim and Asobo with there own stuff longer term

EDIT : As RSR at PMDG has said, this issue should only be a one time thing, once they are sorted for the 737 fore maple, they won’t have the same issues (hopefully) with the 777, 747 etc, so it’s prudent to sort the issues sooner rather than later

wow… that’s insane. Although, seeing how we’ve been treated on these forums with bug threads still going strong almost a year later (with no fixes), it unfortunately doesn’t surprise me…

Can I help RSR by providing matches

Yep, it´s been time for some great 3rd party aircraft. So please MS/ Asobo… keep the spirit and transparency: Help PMDG and others so the community can grow.

I absolutely agree with @moxiejeff and his post! Here is a reply that PMDG made on their official forums today. This screams problems. Come on Asobo, we need an answer to this!

So the lead of the FBW team, Iceman, has also entered into this discussion. This is Iceman’s reply about the situation with PMDG:

I’m not usually one to comment on issue involving other devs, but I feel the need to point out something that simply isn’t true.

There is absolutely nothing regarding the SDK that presents a blocking issue to aircraft development besides a custom weather radar API.

I can say that with 95% certainty having worked with aircraft development in MSFS for nearly a year and a half, and having spoken to numerous other devs and with Asobo developers themselves. Although we primarily use HTML gauges at FBW, we also use WASM gauges for systems and autopilot/fly-by-wire, the same technology that payware aircraft use for all of their code. And if Aerosoft is able to put out the CRJ as a complete product (with the exception of WX & terrain radar), I don’t see why others cannot do the same.

Also, in my personal opinion, Robert’s message borders on unprofessional. Having had contact with Asobo developers for quite a while now, they have been nothing but helpful and nice. There are obviously cannot fulfill every one of our requests at once, but are understanding and help out as much as they are able, given the constraints of working on such a large platform with countless other third party developers to communicate with.

I have also been following Randazzo’s posts at the PMDG forum and his interview with Fabio. From my understanding based on what Randazzo posted in the past, I think Randazzo mentioned that some functionality for the PMDG 737 can be done without Asobo changing the MSFS SDK, but it would take a lot of development time and man hours from PMDG. So of course, Randazzo/PMDG prefers Asobo to change the SDK because it would save PMDG a lot of time and manpower (remember, time and manpower is money for PMDG).

But based on what Iceman has posted (and Iceman is also an expert with the MSFS SDK, just look at what the FBW team have done with the FBW A320) whatever PMDG wants done can probably be done, if they spend the time and resources on it. I can also see PMDG prefers not to spend a large amount of time & resources to do a specific functionality, if Asobo can make the change to the SDK.

this qestion needs to be asked , well are you Asobo are you planning to help PMDG? and a ticket that has been Open for 100 days with no response, that is just awful…

also, there has got to be an upside to every comment / question, Asobo please don’t let robert randazzo run though your studio naked while lighting him self on fire. If that happens we might never see The 737

Note how RSR does not state what the actual issue is. There’s good reason for that. He wants to get the community all riled up and put pressure on Asobo. However, it’s very likely not a sim limitation itself, but rather PMDG’s unwillingness to spend resources to adapt to the new sim platform.

That’s complete conjecture. We don’t know any of this beyond what robert’s words.