Can anybody tell me what this is and how do I get rid of it? I should be seeing my current To - Frm way points? What is this now? 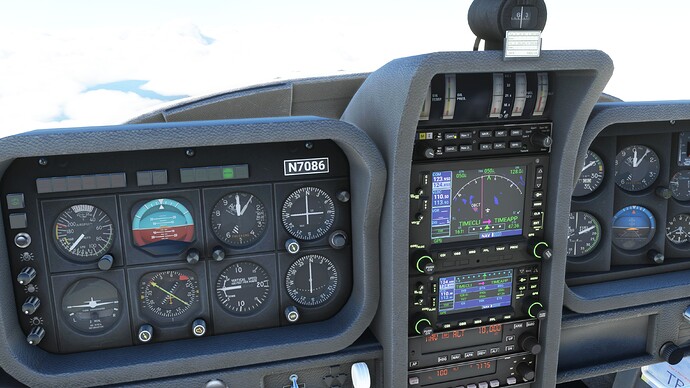 Looks like two waypoints of some sort. But that is odd. Maybe it means from Time of Climb to Time of Approach. Wish I was more help.

Ok I think I have worked it out. It happens when you Import a flight plan. For some reason imported flight plans just become GPS Direct, and as you say these way points then become the to and from.

The other issue I am noticing is if you are doing a flight plan in Little Nav Map such as KORD (Ohare) to MMUN (Cancun) and load it, it will load the departure airport as a waypoint instead of the first waypoint on the route.

This is getting so unrealistic now,

I feel you pain brother. Just after I replied to you, I loaded up the WT-CJ4 and was flying in the clouds. The edges of the clouds looked like an Atari 2600 graphic almost. I just said eff it and quit.

I am about ready to Delete this sim for a year… I mean the Airliners were garbage, now they have killed GA too!

It looks like timeclimb and timeapp are meant to be extensions of the departure and arrival airport headings respectively that FS thinks you are going to use.

It goes pear shaped for me if you choose another departure runway, especially if you start off from parking. If you want your flight plan to stay intact, you have to fly through the timeclimb waypoint after takeoff, which in some cases can be behind you.

Asobo, at least give us the option to delete these most-times unwanted waypoints. Better still, get rid of them entirely.

Known bug since SU5 .
Search the forum for the topic GNS530 mod for the scientific explanation.
It seems to happen in VFR so pick,a start and destination in World Map and select IFR low altitude and they do not appear.

Sounds like you’re having the VFR flight plan bug. You may want to read and vote on this thread.

I have voted and I mean no disrespect but its got 32 votes now? Like every single one of us should be voting on this, it is terrible!! Way more important than Graphics or LOD!

Thanks! With every new update, it takes a few weeks sometimes for people to encounter certain bugs. When I see a thread like yours, I always try to point people to one spot. It’s easier to track and take count that way.

There is a workaround for this. It is a pain, but at least you can import flight plans. I do agree this needs to be addressed, and will file a Zendesk ticket. I am having difficulty getting my head around this, “Fix by popular demand ideology.”

Here is the workaround: After loading into your flight, hit FPL then hit Menu, Then select Invert (flight plan), hit ENT, then Invert (back to your original) Hit
ENT, FPL again, and you’re good to go.

The invert flight plan sounds like a neat workaround but what magic wand are you using to enable the invert option? When I load any plan invert (and most of the other options) are greyed out, although the plan itself is fine for flight purposes.

I’m currently using the IFR option which is a reasonable workaround but would prefer to use the invert.

This is for the 530 model, but I think will work for others. Hit the FPL button, then hit Menu, turn the small knob at the bottom right of the GPS until Invert is highlighted, (It only takes one click of the scroll wheel if you turn it the right direction) then hit enter. Repeat the sequence to re-invert the flight plan back to normal. Hit FPL and you’re done.

Thanks for the info. I don’t have any aeroplanes with the 530 and have been trying to get this to work with the G1000, doing as you described. Despite me shouting loudly at the screen the invert option remains stubbornly greyed out though. As an experiment I temporarily installed the G1000 Nxi and, guess what, invert works fine with it. Rather ironic that the Nxi already ignores the TIMECLIMB ghost waypoint so there’s no need to do the double invert if you use the Nxi! I prefer the stock G1000 for the time being, though, so will stick with the IFR plan solution for now.