What VR Headset should we buy for FS2020?

Since in the last video Asobo said they are soon releasing VR for everyone I am going to buy a VR Headset, but I can’t quite decide which one I should go for.

I am leaning towards the Oculus Quest 2, since the screen door effect is less noticeable according to this video (THROUGH THE LENSES - QUEST 2 vs RIFT vs VIVE - YouTube), any suggestions?

I just bought an Oculus Quest 2 coming from an Oculus CV1. It’s a great overal headset if you don’t mind selling your data (and your soul) to Facebook. Tracking is pretty great and the image quality is very good, especially for the price. FOV is pretty low though, so you will get that scuba mask experience for a bit. You also do need a pretty beefy PC to run it in it’s highest resolution, but that will be the same for other high resolution headsets. You’ll also need a good grade USB C cable, the one from Oculus is way overpriced and there are good alternatives on the market that are way cheaper.

The screen door effect isn’t that noticeable anymore and the headset also has less god ray issues that the earlier generations where plagued by. Best of all is that you can use this headset for lots of other things as it is standalone. I was amazed by how well it works to be honest, you can just as easily use it in the living room as you can use it behind your PC tethered to a cable.

Its a difficult question to answer as there is no perfect headset plus you will be limited if you want to use it this side of the new year due to availability.

I’ve ordered a HP reverb G2 which is due to be delivered on 1st December. I chose that headset because of the clarity and resolution. The Quest 2 isn’t far off the same visual quality but it wont be as good, it is a good deal cheaper though and also readily available.

A lot also depends on your PC and how hard you’re able to drive the headset, If you’re just starting out in VR and you don’t mind selling your soul over to facebook I’d go for the Quest 2.

I have a Rift which is not quite good enough to read the instruments without hassle. That being said I’m keeping it and my current PC until I see some reviews of VR on new hardware. I really really want to buy the 3600x and new gen vid cards but I think the best thing to do right now is hold our horses to avoid spending on stuff that won’t deliver.

Have you tried playing it with 30fps as we are getting on FS2020? I have a RTX3080 but I can’t get more than 45fps with ideal conditions on high, I am a bit worried I will get seasick

I have been watching more videos and I am currently trying to decide between the Oculus Quest 2 and the Reverb G2, the second one is twice the price, but I have to check if you can read the instruments with either of those, if the G2 allows me to not have to zoom in I will go with it

Any headset that requires Facebook is a big no for me.

No I haven’t, 45fps with Oculus Asynchronous SpaceWarp should be enough if I judge things based on my experience with X-Plane 11 and Oculus CV1. I also have an RTX3080 running on 4K high settings and I can get those frame rates in light aircraft and not too dense scenery all the time. In VR you can lower lots of settings without noticing too much though, especially details in the distance, so you should be able to keep up with 45fps.

I’m personally more worried about my CPU, as I’m running on an older i7-6700K and I’m experiencing quite some stutters, those are killing in VR.

As for the Reverb G2 I cannot say anything about how well it can interpolate between frames, so you might need better FPS to run it. The screen resolution and contrast is said to be a lot better than the Quest 2, the same guy you shared the YouTube link from has also made a lens comparison between Quest 2 and Reverb G2.

The G2 will definitely allow you to read the gauges clearly and also to make things out at a distance which is also a big issue for a lot of headsets. with an RTX 3080 in your build I wouldn’t want to settle for a quest 2 as you have the horsepower to really drive a better headset.

The consensus seems to be if you’re after the best visual quality and clarity and are mainly into Sims then the G2 is the headset to go for, if you’re new to VR or want more of a portable solution then the Quest 2 (and don’t mind the Ts&Cs of Facebook).

Once my headset turns up next week I’ll let you know what its like in some other sims if that helps.

also worth looking at some of VRflightsim Guys videos on youtube. hes a small chanel, but i always find his videos informative. 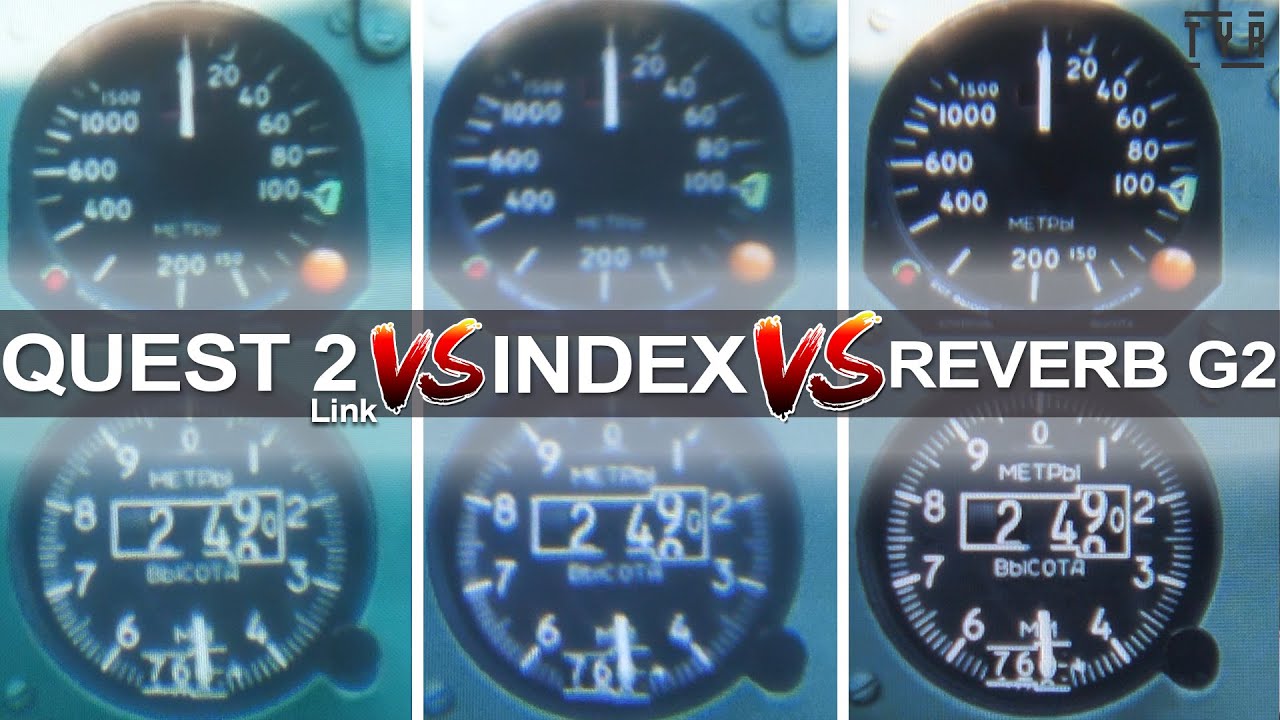 There is no doubt. The Reverb G2 HANDS DOWN!

I’ve been practicing in IL-2 series with the G2 and I can read the instruments without zooming in. I am coming from a Samsung Odyssey where that was not the case, so I feel like serious flight simming in VR is possible for me for the first time now.

The Reverb G2 will have the best display, but some reviewers are reporting disappointing tracking.

The Valve Index has a great display and tracking (being lighthouse based instead of inside out), but is $1,000.

The Oculus Rift S and Quest 2 are both decent headsets - the Quest 2 having a better screen than the Rift S - at the cost of requiring Facebook. Oculus also had quite a few issues with the Rift S connection to the computer - whether or not this is/will be an issue with tethered Quests 2, I am not sure.

Two other options include the HTC Cosmos and HTC Cosmos Elite - the former using inside out tracking, the latter using lighthouse. I’m not very familiar with these headsets, though - so I’d recommend doing a bit of your own research. From what I’ve heard, they are good quality with a couple caveats.

Guys I have never use a VR headset so far, how does this works? Just connect the usb and ready to go? Does it affect the FPS?

A lot depends on the headset and the ecosystem you’re using. Lets take the Reverb G2 as an example.

Connectivity is via Display port, USB 3, and also a separate power brick. It uses the Windows Mixed Reality eco system, but also works with Steam VR but theres a number of different apps you would need to download to get it all up and running.

Currently, there seems to be a problem with that headset using some of the new big NAVI gpus and also some compatibility issues with X570 chipset motherboards which mean some people are having to buy a separate powered USB expansion card to drive the headset.

Once connected, the headset is fairly simple to setup, there’s a nice little wizard to walk you through etc.

Now on to the big one, will it affect FPS. the short answer is yes, your driving (in the case of the G2) 2 X 2160 X 2160 screens but there are ways to tweak performance within steam VR and Windows Mixed Reality so you don’t have to have a 3080 to use it. The longer answer though really depends on the Sim or Game and how well they have managed to optimize for VR. For MSFS we dont know yet how impacting it will be, all we know is what the rumours suggest which is its “awsome” .

Bottom line is if you havnt used VR before definatley take your time to research the various headsets and ecosystems they are connected to and get the best headset for you, every single one has their own pitfalls and downsides so you have to figure out what your willing to sacrifice to gain in other areas. my personal decision on the G2 was based on the fact that i primarily use Sims (racing and flight) so some of the dowsides of controller tracking for this headset shouldnt be a problem and the clarity and resolution far outweigh the slightly narrower than some FOV, I’m also happy to spend a bit of time getting it working properly, so thats where my money went.

You may decide that your willing to sacrifice some clarity and resolution for a simpler setup or better controller tracking so as with all these things it becomes a your mileage may vary type thing.

If you solely want to use the headset for simulation purposes I think the G2 is the best choice, screen clarity is everything in simulation. But if you also want to use it for some casual gaming you might be better of with the Quest 2. Wireless VR that just works wherever you take it has an appeal that I didn’t know of before experiencing it.

Personally I really like to do some paintball in rec room and play beatsaber a few times a week or even daily, it makes me move a lot more, especially during these Corona times where we sit at home a lot more often. But you really need plenty of room for these activities which I do not have in the room where my PC is located. The Quest 2 allows me to do these things in my living room. Also not having to worry about a cable during those activities is really something. We also like to play “Keep talking and nobody explodes” every now and then, just being able to do this on the sofa with friends and some wine/beer and snacks is also really cool.

I just tried the Quest 2 with X-Plane 11 and it is just sufficient enough to be able to read the primary flight displays in the default 737 without leaning in. If you are more of a VFR pilot than screen clarity will probably be sufficient, but for IFR flying it will probably be lacking. I’m a really casual VFR flyer and I’m on a budget, so for me the choice was simple.

Still in doubt because of the low pricing of the Quest 2? Well in that case, let me tell you that you need a tethering cable AND you will want to go for a better head strap, because the one supplied with it isn’t very good. So that will probably add at least 80 dollars to its price.

It’s only controller tracking that people are having issues with, so no concern for sim use.

My G2’s due on Tues, replacing a Vive Pro. Quite excited.

Thanks for the feedback! So it’s a bit more complex as I thought, will need to start researching more