When is the hot fix for the SU7 being released. Are the latest NVIDIA drivers resulting in CTDs?

I really need help as I was on a holiday since the 20th of November. Downloaded SU7 , installed the latest NVIDIA drivers. Now I’m experiencing CTDS all the time. The settings keep going to easy.

Please advise me about what’s gone so wrong.

Do a search on NVIDIA drivers. Recent post talk about CTDs.

Hello everyone, We are carefully monitoring reports from our players that the latest Nvidia Geforce driver (497.09) may be causing issues with Microsoft Flight Simulator, including, but not necessarily limited to, crashing to desktop (CTD) and blue patches where ground terrain textures should appear. Please vote in this poll so we can better understand how widespread this issue is and if it is affecting everyone who has upgraded to the 497.09 driver or only a subset of players. Please choose t…

It is a known bug that your settings are being reset back to easy every time and they are working on it they said, I think they might have a fix for it already. As for the CTD, the latest NVIDIA drivers cause that, we just need to wait out for them to release the next drivers to help fix the issue. In the meantime, you can install a previous version of drivers to make it run.

Yes, the reset issue has been fixed. I haven’t had mine reset since I joined the beta on Wednesday. There was an issue with Nvidia driver also on MSFS side, also that has been included in the coming patch. Some people are still reporting issues though, so to be on the safe side, I would not update to the new drivers before Nvidia releases a patch.

I roll my eyes every ■■■■ time I see a thread about drivers, but I can tell you these drivers gave me the only chronic CTDs I’ve ever experienced in the 2 years (inc alpha) I’ve been playing this game. 1060 6gb

Can you please tell me how to revert back to the old NVIDIA driver ?

When will the new patch be release without joining the beta ?

No release date set yet, I would expect next week, so we have it before Christmas, and the team can enjoy their holidays as well. Lots of bug reporting irrelevant to what the patch is for, though. Some people are taking the opportunity to try and revamp the whole weather system to a perfection. My experience is that all the major issues with SU7 have been fixed, some new issues found, but none are even close to the severity of those introduced with SU7.

First, you can download the previous driver here:
https://www.guru3d.com/files-categories/videocards-nvidia-geforce-vista-|-7.html

Then you can use this tool to cleanly uninstall the current one:

When that is done, you can just install the old driver you downloaded.

I usually do a clean install every time when I update the driver, and don’t use the Nvidia updater.

There is btw nothing to be afraid of joining the beta, you can join now even f you are a Steam user like myself. Just activate the beta in the game properties in Steam. 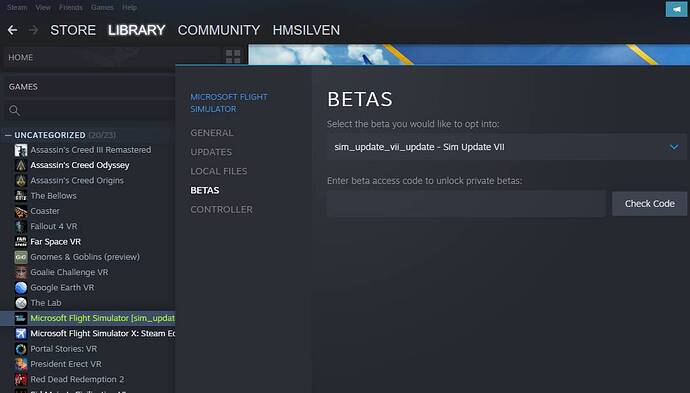 Don’t release anything go back to SU6

Like the other posters said, install DDU and do a clean uninstall of your current drivers and then head to the NVIDIA website Official GeForce Drivers | NVIDIA, and then do a manual search of your card and OS, it will show all the drivers from months before, just avoid the 497.09 driver.

Disable HAGS. I did this and have been flying for three hours without CTD with the new driver.

Where I can Disable HAGS?

Or right click on desktop, in the “System” TAB select “Graphic” then “Modify default graphic settings”.

Restart the pc and try.

I must thank all of you guys on this forum from the bottom of my heart.

The issue was the Nvidia Driver which was released in December. As soon as I rolled back the driver the issue has been resolved. There do appear to be a few stutters, however it could be the case that could be resolved after the new patch has been released.

For anyone who encounters this issue of the blue patches, stuttering and CTDs all you have to do is to google ‘Rollback Nvidia Driver on Windows 11’ and follow the simple instructions.

I have completed 2 successful one and a half hour long flights without issue on the A32NX from purchased airports in Europe on Ultra Settings. There was a Screen Freeze during loading at EPKK airport but on the next attempt things went quite smoothly.

Let’s keep this thread open, in case I encounter any further issues.

PS: I am really scared of downloading the new Beta Patch as I am afraid that I shall have to redownload the simulator from scratch. I stay in a remote area with a really slow internet connection.

Can you opt back out of the beta once the full release is done or pushed out without a full re-install?

Well I tried the Beta and it still crashed with the Latest NVIDIA Drivers? So I give up… Don’t want to roll back, I have games that make good use of the new drivers (DX11) I thought that was fixed. Oh well.