Where Has All The Vegetation Gone? 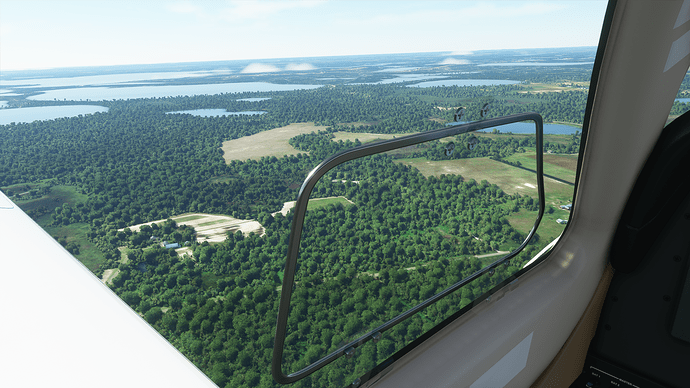 Not been to Leicester airport so no idea what its supposed to look like , but I used to work at Langar and East Mids in Nottingham and neither of those resemble there real life counterparts either.

Dear Sir, welcome to the community and for having the pleasure of getting your first post.
Pease accept a thank you from a mature and happy woman for your post. However, as you may notice if you read your post again, your post does not contain any on-topic relevant information. Furthermore, the other posters trying to make making constructive posts left 2 hours ago. I think there may also be people who gather info but are not willing to share with certain other posters.
It appears you need to seek legal advice from a lawyer regarding breach of contract and warranted product qualities. The law differs depending on country so I cannot give you any advice as consolation. I can tell you however that I have never seen a contract with a clause warranting fulfilment of personal expectation.

You have way too much time on your hands. You do understand people are just trying to give pressure to MS to patch this game up? That’s how it has been working for decades. Gosh legal advice, get some sleep

You’re 100% right, keep on these posts to pressure MS to work on updates/patches faster. And leave posts outlining all potential fixes. Not all of us are accepting this ■■■■ like VeryOldPilots, one day he’ll be happy users like us ultimately making this sim far more superior than it is now

How is just posting on the internet (not even on a voting thread!) putting “pressure” on Microsoft to work faster? LOL, be real.

If you think you have an issue, file a ticket on Zendesk (link at top of page), because that is how to let developers know.

Every little bit helps, comments on zendesk have been left on the evenings of every single patch release

what do you once filed a ticket? Hit the forums. It’s cuz we care remember and don’t want to take anything short what we expect which in turn will make this game unreal on all levels very soon

If you want to play “activist”, that’s on you, but it’s not constructive at all.

Okay, everybody, this thread has been spiralling for too long now. Please remember to stay on topic.

There is no need to call people fanboys, nor is there a reason to direct people to go to other simulators. If you feel someone’s post violates the Code of Conduct, don’t try and deal with it yourself, flag the post so a moderator can review and handle it. If you have not reached TL2, then create a private message with @moderators.

An issue like this may well be a bandwidth, hardware, or settings issue. Users are welcome and encouraged to discuss their experience on the forums, comparing results with other users so they can work out if the issue is game-related or settings related which enables them to send in a more detailed bug report to Zendesk for the developers.

With all of that said, I will be watching this thread, stay on topic.

you are absolutely right!, vegetation (trees) has been severely downgraded. Now it will only load in a tiny radius around the aircraft, quite sad given how beautiful it looked before.

I think mostly your settings got reduced. Mine were and I put my terrain lod back to 200 and trees to ultra and I have nice trees, as in my picture up above.

Where Has All The Vegetation Gone? General Discussion & Feedback

that screen is very low, so it won’t make the trees look so bad. And no, I have tried a gazillion times to change settings, delete cache, use default ones and back to ultra, custom, etc. No, trees drawing distance is now way too short.

This is an opinion. Originally, many people thought trees that towered over 5 storey buildings were too big - an opinion I shared, and I used the tree mod from this forum to reduce them. Now trees have been reduced somewhat, and with my current settings on ultra/high for vegitation, at least here in the UK, they don’t look too bad - some are still too tall, and some are not in the right place - mostly, that is bearable, apart from on airfields and their surroundings, where at times, they pose a bit of a flight hazard.

I had hoped that this thread was trending towards finding out why some people have different experiences, but the combination of naysayers arguing with Fanboyism is not making it easy.

I didnt express myself correctly, sorry. I meant the trees rendering distance has been reduced way too much, not that trees height is too short.

No need to apologise - your opinion is just as valid as mine. However, I haven’t noticed it doing that - but as with many things in this game - your mileage may vary. I did also think they were too bushy before. To be fair, it is never going to be right for every occasion. A forest in the UK is not going to be the same as in Germany or Canada, and land use data is not that great an indicator of whether the woodland on the map is 500 year old Scots pines in an ancient forest, or a bit of scrubby woodland surrounding a housing estate.

I don’t understand why some people dismiss others concerns out of hand - even if it is just a settings issue - all it usually takes is a bit of collaborations to find out what the issue is. Unfortunately on this forum, any question that claims that something might not be working is usually jumped on by a handful of people who think they are experts, and dismissed out of hand, usually with something along the lines of go “back to X-Plane” or “fine if you just want a game” .

I paid $1.00 through xbox game pass to play this… Its amazing how many trees I got for one dollar. Like 1 billion trees . I think I got my monies worth.

Please try with clear sky , no haze , july 12ock mid day , that’s interesting as my trees and grass are set to Ultra.

Did that, (although you did have clouds on in your shot). Everything looks much the same as my previous shot, but brighter.

Generally, looking at satellite imagery, remembering how barren parts of Leicester can be, close up, trees are what I have come to expect, they are everywhere, and a little too high in number and size (for the UK - (and definitely for Leicester). At the moment, every garden in the city of Leicester is crammed with dirty great deciduous trees that seem to dwarf the rows of 2 storey houses. I wish it looked like that in real life, but the household insurance for those people is going to be enourmous. Anyway, point is - the trees that are there appear to me to be no less plentiful than before, and short of some mammoth task involving teams of people scouring all OSM data by hand, I don’t realistically see it getting fixed until they come up with smarter code to interpret land use data differently. Some areas will always have too few, and others too many.

That aside, I did do some measurements, and the draw distance for trees fading out (for ME) at 4km, 13180ft, 2.2nm. The following shot is over Wigston, South of Leicester (in the UK) looking roughly in the direction of the previous screenshot, at roughly 2000ft from a drone camera directly above the aircraft. The red lines and top of frame are approximately 4000m on the ground from the aircraft (measured on Little Navmap). This does seem a bit close if you have trees set to Ultra. It’s not as if you can’t lower the tree density in game, so I think they probably do need to de-nerf it. I get the feeling that perhaps they misunderstood the complaints that trees were too big, with the notion that there were too many trees being drawn. Trees are still too big, and too numerous close up, but too scrawny, and too few beyond a couple of miles. 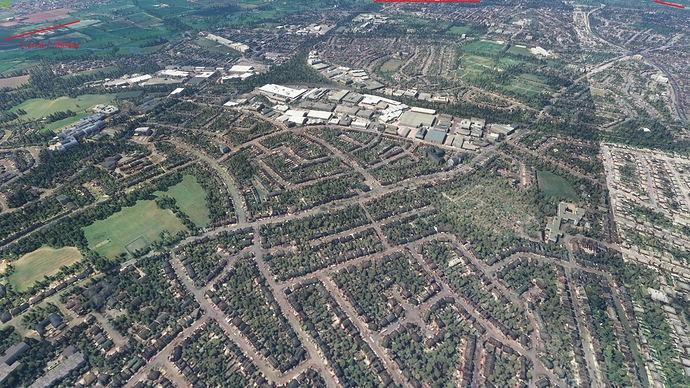