I am once again hoping for KTPA. Weird to me that KPIE has an upgrade but the biggest airport in the area does not.

Still need a good KBNA. There’s a freeware one on Flightsim, but it’s using the default (bad) terminal textures and doesn’t conform to the new LOD requirements for jetways. So you end up with most/all of them disconnected and hanging in space. Not good. To the creator’s credit, he does some good stuff with the ANG hangars and cargo terminal across the field but the main terminals are about 70% through a major reconstruction, the ramp drainage basin/retention area is being entirely re-done to fill in and make use of the space to expand the ramp, there’s a new hotel and parking complex; and new International Arrivals structure to rebuild/replace part of the older terminal wing. The place is going to look great next year - it would be nice if there is a decent representation of it.

Would like to see Orbx improve London City as it was out of date layout wise when it was released.

A decent detailed version of Madera would be cool.

Naples is done by RDPresets , out already
Malpensa is in the works, can’t provide more details unfortunately

Yes Malpensa and Napoli are my day one purchases when released. Been there many times as passenger IRL

As posted by others, the main City ones. Seoul is one that stands out for me. Not sure if there is a Taipei one but Eva Air flies everywhere

I’d love to see KHIO near Portland, Oregon – it handles a lot of GA traffic in the area, and the default autogen version has all the taxiways wrong.

(The “Real Taxiways US” add-on helps with the taxiways, but it still looks very drab. :D)

Photo from a commercial flight out of nearby KPDX: 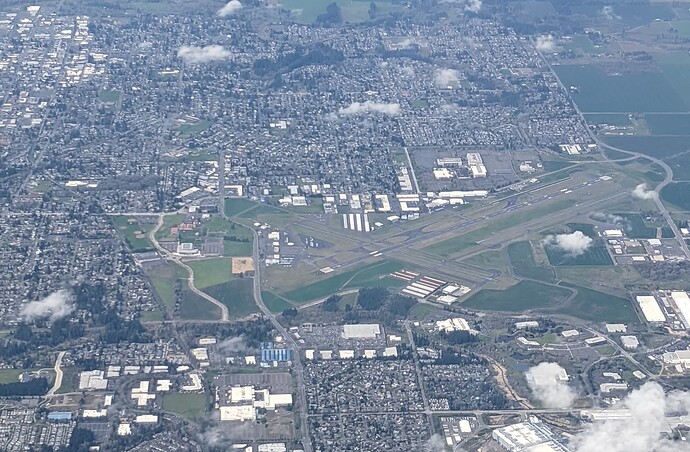 I’d really like to see more Xbox anything!!! I didn’t have the money for a PC build and the series X looked like a great way to jump back in. Super disappointed in the 3rd party support so far though - I realize it’s not easy for the developers. Just disappointing as a user. Personally I’d love to see more of my home airports:

Especially since as it is, you can’t get a pushback out of BUR for some reason… Hoping that will be better with the 3rd parties. I know ORBX has a BUR, but not available on Xbox… Please developers!!!

As someone who loves holiday charters:

Someone really needs to tackle

Honolulu and the surrounding city and Ford Island in a FlyTampa/LatinVFR sort of way.

Same for Lakehurst, NJ and the fascinating airship and test facilities still in place, which has the only land based fully operational catapult/cable arrest setup on the grounds.

DO we know if any devs are making any of these?

KPMD would be an interesting challenge. Air Force Plant 42 is where the Space Shuttle Orbiters, B-1 and B-2 bombers were all built. NASA has a flight facility there and no less than three aerospace manufacturers are present.

There’s an outdoor aircraft display that’s currently rendered via photogrammetry, and it’d be an interesting challenge to model a 747 Shuttle Carrier, a B-52 bomber, an F-14, F-4, and two Blackbirds on the premises.