Yesterday afternoon I had some free time so decided to fire up MSFS and get a flight into the logbook. I have been using the Caravan flying across the Southeast US visiting areas I have visited or worked in the past.

Anyway, I was located at KVDF Tampa Executive Airport, selected the XCub with the idea of flying over Disney World and then cruise the Space Coast since I had added the freeware upgrade scenery for the Cape. The weather for my flight into KVDF the evening before from KMEM had been perfect with Live weather matching exactly what I was seeing on Forflight. Basically CAVOK till about 30 miles out and then high clouds associated with a front.

The weather for this particular flight from KVDF to KTIX was marginal VFR with thunderstorms in the vicinity - but marginal does not mean no right? Anyway took off and was amazed by the weather - flew at 3000 feet average ducking between thunderheads and doing some serious scud running intermixed with climbing above the 1500- 2000 foot broken cloud layer then ducking below when there were substantial openings.

Was lucky enough to have a sizable opening over Disney World - for stock scenery - was impressed in seeing the monorail and other depictions of the area including the massive parking lots :-). But with the weather starting to deteriorate - not much time for sightseeing

After so serious berating of my decision to take off in such weather, struggled to maintain what would be considered VFR twisting and turning to avoid the worst of the weather - taking advantage of the clear areas, I made it to the Nasa complex and as with Disney - was granted a hole in the weather so I go a great view of this fine freeware improvement but now it was time to get back on the ground since I had tempted the Fates enough for one day.

KTIX was reporting 3 miles visibility Broken at 2000, broken at 6000 and rain in the area - so headed west and was cleared to land on RWY 18 - as I started my Long Final - a dang squall line interceded between me and the runway - fascinating - in RL would have aborted - but in RL never would have even gone to the airport in the first place - so continued - never lost sight of the runway lights totally - but it was pretty hazy. Landed but not a greaser by any definition of the term - but overall a fantastic experience.

I know MSFS has some serious bugs, especially with the tubeliners - but in my near 35 years of flight simulation, I have never such an experience as this flight. The Live weather was spot on, the Xcub flew as expected with in the flight envelope I was flying, I have update the AIrtac cycle using the beta navigraph updater and utlized both Navigraph Charts and Little NavMap for flight planning and moving maps with FlightEvents Client running to connect Foreflight on my Ipad. The latter allows me to compare real world weather with the Live Weather being injected into MSFS.

Unfortunately this has turned into a wall of text - BUT - for me MSFS did what it was suppose to do - for an hour and a half - reality was suspended and I was total immersed into the flight and I had a blast! I do hope all other can have such an experience - it is what keeps me flying :-).

Thanks for sharing. Not a bad result from a sim that is ‘completely broken’.

Nice story. We could do with more of this here. 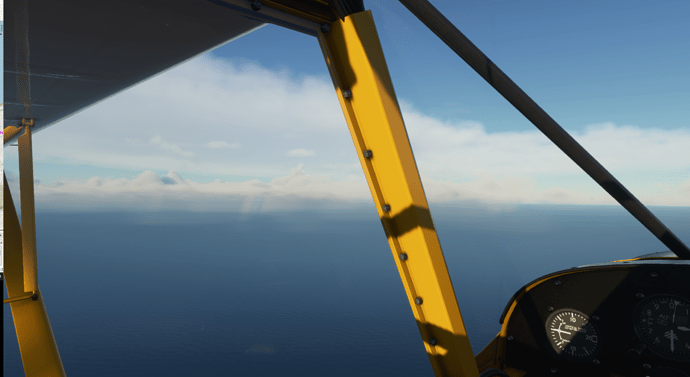 Ok - another first for me in a Flight Simulator - was starting my journey around Cuba (and through the Caribbean) and once again Live weather matched what was on Fore-flight with respect to winds and cloud cover – when I noticed a rainbow in one of the rain squalls off the coast. It faded as the squall moved on and as the angle of the sun changed with my track - fascinating.

Epic journey and review. You really need to start vlogging. Would love to watch your commentary as long as you don’t switch to third person view

Thanks for the compliment… but I am much better at “after action reports” rather than live commentary.