I was just wondering whether Asobo would at some point publish some “flight statistics”, e.g.:

As we constantly upload our aircraft’s position (when online) such statistics should be doable.

I could imagine that they are also considered to be of “business value” (specifically for the Bing team), so not sure whether it would be in the interest for them to publish those statistics.

But at least a “heat map” of the world would be fun. Yes, fun, not useful. And I am pretty sure that there are some other “fun facts” to be derived from those numbers.

They published this at the end of December - that’s all I’ve seen - but it shows they are keeping track! 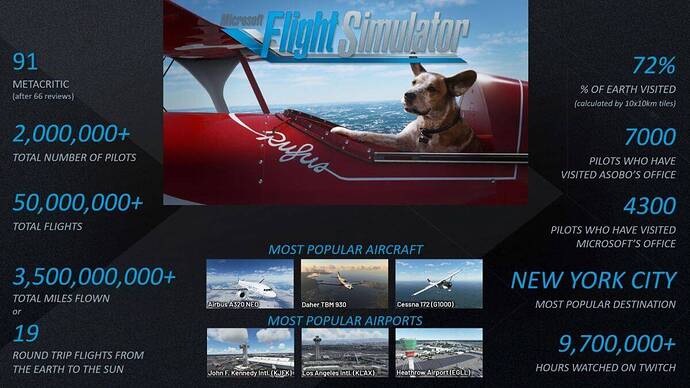 I could imagine that they are also considered to be of “business value” (specifically for the Bing team), so not sure whether it would be in the interest for them to publish those statistics.

If no one user, or a collective group of users is identifiable, what would the privacy issue be?

This would be great to see where you find people in the multiplayer mode. Perhaps without user names, or with the possibility of an opt out. I think it could be also a good marketing tool for MS to show the user interest. I am still astonished every time I
look at Vatsim’s live map and it looks like Flightradar24. There are more virtual flights than real ones!

Thank you… doh! I could’ve checked that first myself!

So 72% they say… that means that roughly 28% of planet Earth is still uncharted! Let’s go

You’re joking right now - are you?

This would be great to see where you find people in the multiplayer mode. Perhaps without user names, or with the possibility of an opt out.

Okay, hold on people… I now think I know where those privacy concerns come from.

I was talking about statistics - as in “accumulated, historical data”. Not some online “who is who and where” map (albeit I agree that this could be useful, when “opt-in” for multiplayer - but just so you know, this already kind of exists: if you make “friends” with someone within FS2020 and that person is online/fyling then you see the aircraft’s location already and can “spawn” at that location).

Whether it is identifiable or not doesn’t really matter. You are still feeding data about you to their servers for analytics and statistics processing, even if it doesn’t contain identifiable information. It’s still a privacy issue.

This whole thing needs to be stated in the privacy policy in accordance to the GDPR standards. And give us the options to opt out completely from this data mining process.

These day and age people’s so amazed at how online services are so “personalised” and they don’t realise that this has been possible because tech industry has mapped out you as a person with your interests, your habits, and your personality, simply from datamining non-identifiable information about you. Sure, they don’t take your name or date of birth which makes the data unidentifiable. But it’s still data about you. And the notion of these data becoming the “business value” that companies sell to other companies to be able to provide better services is the scary bit.

All I want is to just fly the sim from places to places without anyone having to see where I fly, where’s my favourite place, what day do I like to fly, what time is most active for my flight simming. I’d rather not have anyone mine all those data from me. If I want to share any of that information, then it has to be my choice to do so. Not something that’s just “taken” for analytics purposes. I take my privacy very seriously, so things like these must be stated in the privacy policy and have the option from us to opt out of those activities.

Whether it is identifiable or not doesn’t really matter.

Oh, it totally does! Talking about privacy only makes sense in the context of individual data (which may also be related to smaller “groups” of people, yes). But let’s not go down that road here - this is about flight simulation

You are still feeding data about you to their servers for analytics and statistics processing, even if it doesn’t contain identifiable information. It’s still a privacy issue.

This is a different question then. While related to my original question about statistics (“gathering data” is a precondition to that, yes) it is still a more profound question that you are raising here.

Yes, it is a fact that your MSFS client constantly sends your position data “to the cloud”. But that is a technical requirement if your client is to stream the proper scenery tiles! If you don’t want that: go offline and fly with the more generic world scenery (which still covers the entire world!).

Complaining about your client providing your virtual position (which, yes, I agree may reveal also your real-world position in some instances, if you’re constantly - and mostly - circling around your house. For sure your home country would be easily identifieable etc.) is like complaining that other gamers see your location while playing Doom online.

Yes, I am pretty sure that Asobo / MS is also using that - anonymous! - data to improve their others services. Bing Maps comes to mind first. But it is a “give and take”: you get free scenery updates every then and when, they get information about “most popular places” etc.

Personally I am totally fine with this.

The whole topic of the limits individual privacy is not a clearcut as it may appear.

Given historic events, the anti-terrorist agencies would certainly be interested in interviewing any sim pilot who continuously practices crashing an airliner into symbolic sites (e.g. the Pentagon, Buckingham Palace, the Kremlin), and I believe the major tech companies would be obliged to report any such suspicious behaviour (with details of the individual concerned) irrespective of any privacy concerns. And I believe most people would support this.

Governments have made it clear (both in words and action) that individual privacy does not have precedence over national security. The only question is exactly where the line is drawn.

That would depend on whether data is collected which can be used to cross-reference and identify an individual.

A lot of companies just don’t bother collecting personal data anymore because of GDPR and only collect anonymous usage statistics, because the fines for mismanaging the data can be pretty hefty. So, no usernames or ip address would be specifically stored but, for example, but they may record the location of the user based on that ip address. It will be in the small print somewhere, because it’s illegal to collect personal data without informing the user and asking to tick a box.

So, a terrorist practicing in a flight sim might be an alert but the specific user might not be stored. However, they might have a city or country… an airport or aircraft frequently used during ‘practice’, and so on, so authorities might then want to watch for things based on that.

For example, in a previous job, we collected everything about the user’s location, activity and behaviours using our online product, in fine, granular detail (and a massive portion of our work was based on data analytics to help us improve the product) but we didn’t collect anything at all which might be used to identify an individual or anything which could be used to cross-reference and discover an identity of an individual. The reason for that is if you don’t collect it in the first place, you don’t need to ‘manage’ it. Many companies follow this general ethic. If it’s a personal concern, then check out the data policy for MSFS, which is available.

Having said all that… you know… governments on-boarding companies and spying on citizens… trustworthy? Who knows?

Japan was very busy.
USA was also busy.
UK next.

Any T 'rist worth his salt will get the scenery for the target, and then pull the internet cable and fly Offline.

Or do his dirty dealing on a sim that is totally offline.

Japan was very busy.
USA was also busy.
UK next.

Australia is very busy as well