I have made the same conclusion. I think they should make the camera more trying to be level to the horizon. But not everyone agrees with that. But i have learned to follow horizon to not feel sick. I have a boat and same thing there. We try to have our head and eyes be level. Now it feels like the head are glued to the plane.

That only applies to non VR. VR-users should not have any effects at all. They decides where to have the camera with their own heads like in real life but i can give them advice to try follow horizon if feeling sick using VR.

Yes agreed, the boat analogy is a good one

“VAR” is used in situations when the windspeed is either less than 3KT or during storms or violent weather when wind direction cannot be determined.

We have a slightly different approach in the Czech Republic.
We report VRB when the wind speed is 2 knots or less and the wind direction varies by 60° or more, or when the wind speed is 3 knots and above and wind direction varies by 180° or more. Otherwise we report the variability with an another group (230V330 etc) but that’s probably same around the world. Like you say, it’s either during a storm, but sometimes it happens during a “normal” summer day as well.
Innsbruck reports it quite often during föhn conditions.

Also, I’ve seen METARs reporting wind gusts even when they don’t meet the 10 knots or more from the average wind speed criteria.

Also, I’ve seen METARs reporting wind gusts even when they don’t meet the 10 knots or more from the average wind speed criteria.

I hope to see variable winds implemented too in the future. Bet it’s really hard to land in those kind of winds. Easy to stall if it changes from headwind to tailwind suddenly.

This is a very good explanation. Thanks

If anyone interested but haven’t looked into it deeper yet, a pretty good study on turbulence: https://www.weather.gov/media/zhu/ZHU_Training_Page/turbulence_stuff/turbulence3/turbulence.pdf

Gusts are nice BUT…. There’s always a but… the trees and stuff are gusting as if there’s a hurricane coming up the coast and winds are only at 10kts

The visual effects are caused by how gusts are implemented. Now, for each individual plane gusts are depending on it’s GS (and/or TAS?) + and elevation above ground, etc. So if the gusts are accelerated to simulate the effect of the plane’s speed in the air every wind effect in the generated world will be the same. Windsocks, tree movements, I suppose even waves too. Later these could be corrected, we’ll see, but they’re now connected, there’s no separate wind effect for the plane and everything else around in the world.

I suppose my last cents for the topic:
After doing some more flights my conclusion is that gust/turbulence effect is fine for heights above 4000-5000ft AGL. However below this - and especially below 2000ft AGL for lighter planes it’s currently a bit to harsh. I know why it’s called friction layer and I really understand that it must be simulated to an extent but with light GA planes many times it seems there’s a hurricane down there when there’s a 10+kts wind (with headwind too) while it’s pretty calm (sometimes even wind speeds have been reduced) above the friction layer. With 10kts crosswind even full rudder doesn’t have enough authority during takeoff run in a Piper Warrior or a DV20 - and I can tell it’s far from being realistic. It’s not impossible, that lighter GA planes should be modified instead of the gust system (but rudders currently have pretty close to real authority in calm weather / higher speeds) but it’s clearly a work to be refined somewhere.

Yes, i start to agree actually. Feels like the gusts are manipulated in some strange way near ground. I practiced some landings today in strong headwind gusts. As i came closer to the ground i could actually not slow down then suddenly below a specific altutde the wind suddenly stopped and i could decend and the winds were constant until touchdown and then after the touchdown the gusts started again. Really strange. The gusts near ground is not good. Hope they not do this to try make it easier to land or something.

I think ground effect might change the gust effects a bit too. Anyway, descending from 6000ft AGL to an airport with some winds around is a bit weird now. I had some pretty nasty touch&gos last time in several airports in 13-18kts winds. Even with headwinds I was all over the place sometimes and that’s not funny on smaller airfields.

I’ve a lot worse weather landings IRL in even smaller airfields - especially combined with strong thermals around or on final - so I know I’d have gave up flying IRL if that would have been the case only once.

Yes, i agree with you. It can be improved. I think it’s much better with gusts than without though. The atmosphere feels so much more alive now than pre su10. I can hear the wind blowing in different speeds now outside of the airplane while on ground.

Yes, a good leap forward. These are just my ideas how to improve it at least according to my experiences.

Actually my grand caravan behaves more like an helicopter near ground lol.

Will check if my kodiak behaves the same.

Just to show you. It feels like the planes altitude causes the air to become constant near ground. Then when i come to a complete stop the gusts starts again. 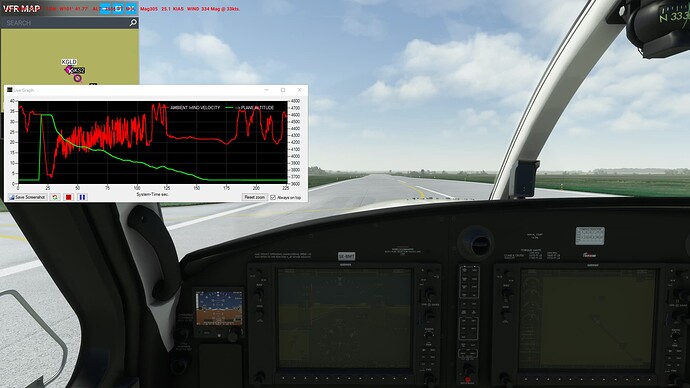 Thats not how air works. It’s not the planes altitude that decides the gusts.

Edit: I checked several times and it’s same thing everytime in high reported gusts. In lower reported gusts it works as expected without change near ground.

To me it’s better to implement a toggle for gusts instead of limit it or make it behave unatural for everyone.

Good catch, thanks!
Well there’s this “friction layer” they may have tried to introduce somehow but it’s effect currently is a bit overkill. So height above ground affects winds, there will be more gusts near cities, mountainous terrain in low heights, etc. but these also slows air down. Even if it’s more gusty the wind velocity - thus the gust energy - is lower and these gust are rarely so frequent like in the sim. Which I have met already IRL in similar wind conditions were slower and more manageable to handle - not these extremely agressive twitchy movements a few hundred feet above ground.
With a minimum 25G35kt wind report I could accept the actual standard non -gusting 15-20kt winds effect on the plane near the ground.

Yes, i don’t want to speculate much. I just wanted to report a thing that made me confused while landing. Coming in for landing with much gusts and then suddenly becomes steady/constant winds. To me that is far from realistic. To me the gusts they have in custom-weather with gusts per minute at standard 35 (not actually 35 per minutes,became broken after some su-update. Before it was broken 1-3 gusts per minute was perfect) feel much more realistic than live-weather gusts. The winds are stronger higher up and becomes less strong while landing. The frequency stays the same all the way down to touchdown though. Thats not perfect but feels much more balanced frequency overall.

Edit: A thing i also thought about is that we have two sources of weather in the sim. That applies to winds too. Lets say Meteoblue predicts calm winds then maybe METAR reports really strong winds that means we get calm winds before arrival to METAR zone and then after that we suddenly get strong winds. Thats something Asobo can’t do anything about because many needs the winds to be as METAR says. That problem we will see have bigger impact when they increase the CFD. Because they can’t both simulate real airflow and at the same time have the air fixed as METAR says.

If we only had Meteoblue we would either get strong winds thet gets lower and lower in speed all the way to touchdown with a smooth gradient. I think airports without METAR feels much more smooth and natural.

Here i compared them

Without METAR, gets windspeed that decreases the lower we get. 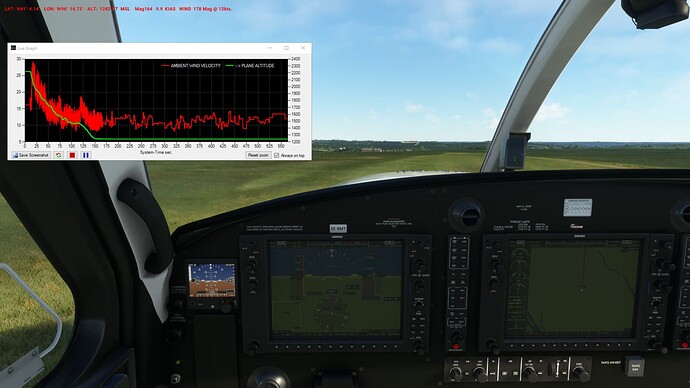 With METAR, gets windspeed that increases the lower we get if we have a METAR reporting higher winds than Meteoblue.

No error from Asobo, thats how it is using 2 sources of winds and we need to accept it if we need METAR. I don’t need it because i know thats not how weather works. Meteoblue is more believable weather. Not always 100% accurate though.

The gusts frequency Asobo need to tune down more though. I would say 1-2 gusts per minute

Here is a video when i land in a Meteoblue only area. Felt so much more smooth and realistic. Should have made a goaround when i got that stall i think. What do you think? 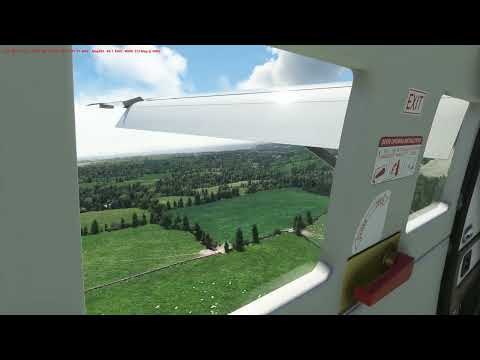 I don’t think you’d have a job very long. Lol

Problem is that people when flying on VATSIM, IVAO, or other networks need to have consistent winds, visibility, pressure, and temperature. This is a lot simpler if all people only use MSFS, but the reality is other sims are also used. So the only source that available to all is METAR instead of Meteoblue data. A compromise might be a solution here, say cloud coverage and gust frequency are taken from Meteoblue, but wind speed, wind direction, pressure, and temperatures are taken from METAR.

Edit: most of the METAR weather requests comes from people that play online on these networks.

Can agree with pressure and wind direction but speed and temp? actually not at all. Metar is needed to decide runway in use and what altitude to hold but that vatsim has found a workaround for.