The release notes mention some Optimisations for windowed games or games running in Fullscreen windowed mode (which I think this sim uses) and so far it’s been performing well and stably on my system.
Currently got my terrain LOD at 400 and I still haven’t had any CPU core going over 80%.

Very interesting, but unfortunately I wasn’t so fortunate when I updated my Win 11 beta with the latest 22581 release. While I saw a surprising increase in FPS (from low to high 40s in VR) I had very bad stuttering, far worse than I ever had, which made the sim basically unplayable.

Unfortunately I had also stupidly upgraded to the latest Nvidia driver 512.15 and WU8 at the same time, so I wasn’t at all sure what was causing the stuttering (I hadn’t changed any settings). By a process of elimination I came to the conclusion that the Beta update was probably the culprit so I decided to revert back to the previous version, but this resulted in not being able to run MSFS! I think this problem was related to the fact that my early adoption of MSFS put the software deep under ‘Users’ rather than in the ‘Xbox’ folder. As I couldn’t find an easy fix to this I decided to delete and reinstall MSFS but, as I can’t get out of the Insider Beta program until the next ‘public release’ and Win 11 was going to automatically update again to the latest version within 7 days, I decided to reinstall the latest 22581 build first.

I’m currently about half way through the MSFS installation (using the apparently obligatory Xbox app) and your observations fill me with hope that all this hassle will be worth it and that the stuttering will have gone. Fingers crossed!

I will report back.

The latest beta update appears to have introduced a new Optimization ‘On/Off’ setting (I’ve not noticed it previously) which is located at:
Settings/Gaming/Game Mode/Graphics/Change default graphics settings/Optimization for windowed game (default is ‘Off’). I didn’t find the help document at the nearby link very clear. As I don’t run MSFS in windowed mode, and I only use VR, I assume it should be left ‘off’.

Very interesting, but unfortunately I wasn’t so fortunate when I updated my Win 11 beta with the latest 22581 release. While I saw a surprising increase in FPS (from low to high 40s in VR) I had very bad stuttering, far worse than I ever had, which made the sim basically unplayable.

Initially I thought it was slightly worse after the beta update but then I noticed it had changed my power plan and removed the AMD High performance plan I had been using before.
I reinstalled the latest AMD chipset drivers again and it was fine after that.
After a day or so running the beta I installed the latest Nvidia drivers too and they seem to be working fine. No difference to the previous version noticed though.

The latest beta update appears to have introduced a new Optimization ‘On/Off’ setting (I’ve not noticed it previously) which is located at:
Settings/Gaming/Game Mode/Graphics/Change default graphics settings/Optimization for windowed game (default is ‘Off’).

For me it was defaulted to On and as you can see from the screenshot it is greyed out unless I turn Auto HDR off as it’s a requirement for that. 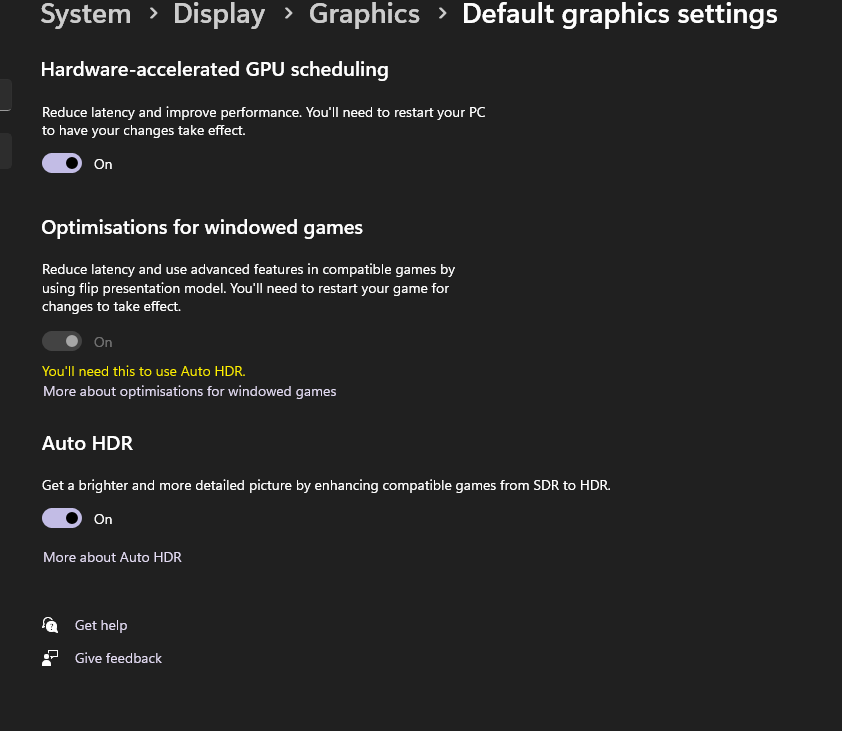 The link in that settings page takes you to here, which gives some details about the optimistations 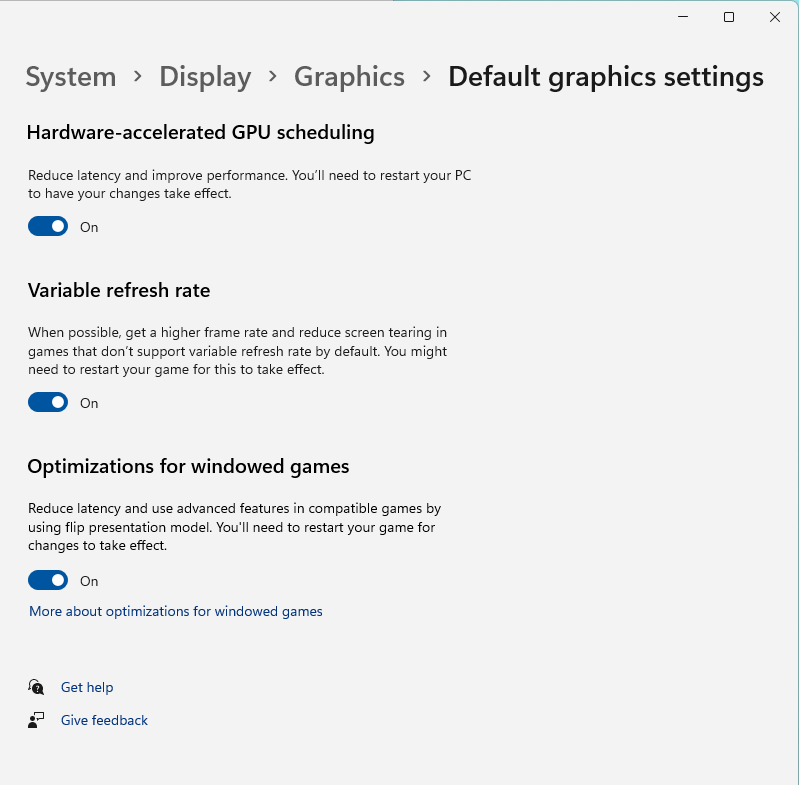 Updates in Graphics and Gaming

I can’t say which would be best for VR as I don’t currently have a VR headset. I suppose it’s a case of suck it and see.

I finished reinstalling MSFS and am sorry to say that I’m back to where I started … no reduction in the bad stuttering.

Given that your processor is AMD while mine is Intel (i9-10900) and you run in 2D while I run VR (HP Reverb G2 and RTX-3090) it is difficult to compare our results as it is much easier to get good graphics performance in 2D than in VR.

I think I will again try reverting back to the previous Win 11 beta version, with the hope that this time I won’t have to reinstall MSFS (as it is now installed via the Xbox app). I will do this just to confirm that the latest version is the problem. If it is then I will need to do a complete Win 11 reinstall in order to exit the Insider Beta program.

Anyone have any other suggestions as to why I’m getting this bad stuttering?

Since I reverted from the Win 11 beta back to the previous version of Win 11 my stutters are (almost) completely gone again.

And as you know i had to reinstall MSFS2020 and could not find any other way to recover it.

Which version of Win11 did you revert back to? I assume it is still a Beta version, unless you did a complete Win11 reinstall (to get out of the Insider program).

If you are still in Beta how can you avoid it automatically updating to the latest version after 7 days?

I can no longer see the Insider page I guess because I opted out but I remember there was an option I had to change (I think disable) towards the bottom right.

I have reverted to the previous Win 11, 21H2 (build 22000.588), but it was a hassle to ensure that an automatic update back to 22581 would not occur. I had to rejoin the Insider program before it would let be switch out of beta updates! Looks like I’m now safely out of the Insider program.

Now reinstalling MSFS, for the second time in two days.
Fingers crossed that the terrible stuttering will have gone.

Did you try turning off the windowed game optimimisations . You can do that on an individual app basis. Maybe that’s not wirking well with VR?

Yes, the new ‘windowed game optimizations’ function in version 22581 was off (I never tried it on) and I still had the bad stuttering. I’ve now reverted back to the previous 21H2 version which doesn’t have that function.

same as many guys done ,I stupidly installed latest nvdia drivers and the worst part is installed 22581 beta release, my download speed went to 0.65Mbps even i have 500mbps fiber-optic connection ,okala speed test give 455mbpels though , after starting simulator message pops up low bandwidth switching to offline mode , resulting no photometry , have huge stutters , interestingly using only 6 ℅ of cpu (Intel i7 11700k) while before upgrading windows and graphic drive it was using 15-20℅ of cpu ,
I hope windows or Asobo will fix this soon

22581 caused me nothing but blue screens. Tried rolling it back and now stuck in “inaccessible boot device” loop. Reformat coming for me. Yea

Halleluiah!
Very happy to report that I am now back to the same smooth high resolution VR performance I had before my Win 11 beta was automatically updated to the current major (21H2 to 22H2) Insider beta release.

I won’t repeat the many stages I went through over the last few days (look back through my posts) but basically what I had to do was revert back to the previous Win 11 version (22000.588), exit the Insider Beta progam (to avoid having the latest buggy version reinstall itself) and then reinstall MSFS (as it was deleted by the Win 11 version reversion).

This process confirms what at least one other person had to do to get rid of a major stutter problem apparently introduced by the latest beta Win 11 update 21581.100. Hopefully MS will fix this problem before the 22H2 public release later (Oct?) this year.

I moved over to the Win 11 beta build 22581.100 yesterday to try it out after seeing the variety of results reported above. I also noticed a significant drop in cpu usage, but at the same time it also re-introduced a lot of stutters, which I had previously worked hard to eliminate. I found the Pilot Pete and Originalbabu setting suggestions were a helpful starting point, and made gradual minor tweaks and changes until it was working really well.

Just in case it was the new optimisation not working well with the existing game setup, I tried the DX12 beta in-game, but that was not successful. The stutters were much worse, and frame rate went through the floor. I tried winding all the graphic settings and sliders back to medium or low, but it didn’t help much, so I have reverted to DX11.

With my previous settings I was able to get the sim running very smoothly and maintain good frame rates (high 50’s), even in photogrammetry areas like Manhattan and London, so I’m going to try and recreate the same with the new windows beta if at all possible, before I give up and revert to the previous build.

CPU is an i7-11700k, with 32GB 3600 ram and an RTX3070 ti driving a 27in 2K/1440p monitor. The sim is on a dedicated 1tb M2 nvme drive, and I have a hard-wired 1GB ethernet connection. Cooling and PSU are more than sufficient. Nothing is overclocked (apart from using XMP for the ram) and all drivers are up to date. I use the sim in fullscreen, with little or nothing running in the background. There’s nothing in the community folder either, as I moved out any mods and add-ons before starting this experiment.

I will leave it in developer mode to be able to assess the changes. I’ll start out at the medium setting preset and play around with the GPU settings first, then tweak the LOD sliders and see how it goes. Does anyone have any further suggestions, or care to share settings screenshots to try out?

Thanks for any pointers or comments!

I admire your tenacity in sticking with the latest Win11 beta (22581.100), which clearly impacts negatively on MSFS (especially in VR), and I do hope you make progress in reducing stutters. Please continue posting your results as we, and MS, can all learn from your efforts.

Because of these latest update problems I’ve decided that the Win 11 Insider program is not the best choice for MSFS, so I’ve gone back to the previous ‘stable’ version (22000.588) and unsubscribed from the Insider program on my PC that is dedicated to MSFS.

I think you’re almost definitely correct, but having downloaded and installed the thing I thought it was worth a few hours of experimentation, just to see if there is any benefit to be had from it now that I can share.

If I can’t make it work reasonably well for me then I’ll roll the Windows version back and wait for the official release or a further fix.

Well I can’t comment on VR issues with the latest beta but for me it’s working very well as I have already described above.

I run my sim limiting the fps via the nvidia control panel and using the fast sync option from there too.

After the beta install I was able to increase my fps limit by 4fps and my terrain lod (initially to 400 but now dialled back to 300) and still have lower cpu usage than before.
The only stuttering I see now is when taxiing on high detailed airports and I got that before the beta anyway