Altitudes is something that LNM doesn’t do particularly well at the moment. However, it does have a flight plan elevation profile feature that allows you to set the most suitable overall plan altitude.

At the top of the flight planning window there is an adjustable field which is used to set the overall plan altitude as well as a choice between setting the plan as VFR or IFR: 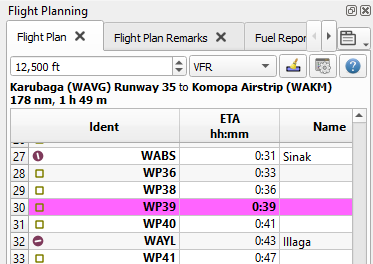 If you open the flight plan elevation profile window

The flight plans I created in game are all set at 7500 ft, which isn’t always high enough either. (Sometimes it sets it at 6500, sometimes 8500, don’t know why) Those are altitudes at airports which doesn’t make sense anyway coming in for a landing.

So far I’ve only used it to fix a couple flight plans (which indeed set the altitudes to 0) and to generate a world map of my route.

I indeed have the elevation profile in my LNM. I set 6500ft.
But if I export into .pln, there is not altitude data for the ‘user defined’ waypoints.

After some tests, it seems that LNM only exports the altitude for airports. Even VORDME and IFR waypoints have no altitude in the export file.
I could find no option in LNM to correct this.

For now I modified manually the .pln file.

Seems that it’s a bug on my LNM version… it will be corrected.

I have entered some other flights (The Tibesti tour, already on the forum, and a new exclusive flight on the Bolivian Altiplano

We’ve had a lot of downloads, though I’ve just started tracking that a few minutes ago. Hopefully we’ll have some numbers in the future.

@SvenZ I’ve also just pushed up a major update to the uploading process which should resolve the issues you reported earlier with text being rest. Please let me know if you experience any issues. It was a pretty big overhaul to the upload process, so it’s possible there is a problem in there somewhere.

@FlavorFlav365 I’ve pushed up the time display change you suggested as well.

It seems there’s an issue concerning the flights duration… the displayed duration in the FP summary does not match the real durations of the flights.
I entered 1h30 for the Chile volcanoes tour, and it’s displayed as 2h30 in the summary. If I edit my flight, the time is still good.

This has been fixed. Thanks!

Hi @Smef9835 I’ve spotted a small bug when browsing the “Browse All Flight Plans” pages.
When clicking through the pages (1,2,3 etc), I’ve noticed the next page doesn’t load the view at the top of the page as expected, which means you have to manually scroll to the top of the page ,then scroll down to browse as normal. This happens on all browsers.

Also, have you thought about maybe adding a “sort by best rated” option? If it was added, you could include a “Top Ten Rated Flight Plans” section/link on the home page so visitors could quickly find and download a highly rated flight plan.

I’ll make an adjustment to the scrolling.

I’d definitely like to add some more browsing and sorting features like “top rated” and “most downloaded” but we don’t have that many ratings yet. It may not be worth much to have that in there until we have more ratings in place.

For anyone who is enjoying this site, please share it with others. I know people like to do group flights either through here, on Twitch, or other communities. It would be great to have organizers for events using this to share their fun flight plans. Please encourage people outside of this forum to use the site so that it can be even better for everyone! More users will mean more ratings, more flight plans, and better content for us all.

@NovaBlue87 I believe this issue has been resolved. Can you please let me know if you experience any other issues?

It is working great now thank you.

@SvenZ and @FlavorFlav365, I’ve just pushed an update for rich text in the descriptions which you guys may want to take advantage of. Let me know if you see any issues.

@FlavorFlav365 I think you went and started updating your race post and I applied some formatting fixes at the same time, so you’ve got some double-spaces in there now. Sorry about that!

That’s ok no problem. The formatting is another great addition, thanks for adding it!

We were featured in the dev blog yesterday and it’s brought a lot of traffic to the site. We’re now over 300 registered users. Thanks everyone!

We’ve also made a number of performance improvements and are continuing to add features based on feedback. Keep it coming!

A special thanks to everyone who has contributed flight plans so far.

I love this idea and so when I fly an interesting route I will definitely upload one and contribute.

I’m trying to do a world tour at the moment, so your site could be really useful to help find interesting directions and destinations to travel through.

Do you have plans to plot the departure points on a map perhaps? That would be a really great way to search and browse plans.

Thanks for creating it!!!

There is a map for individual flight plans when you click them on the list to view the details, but are you talking about one which shows the departure points for all uploaded flight plans? That might be an interesting idea. We could also show the cover image when you hover over the pin for each one.