After the recent “performance patch” I initially noted good results but the further I progressed into my flight the worse the performance got.
By the end of it I was running low end graphics pre-set and only getting 6-10fps whereas I usually run somewhere between high-end and medium and get a stable 30.

Not too sure what could cause this but maybe others are experiencing the same problem.

Please join the main conversation around the patch here. Thanks!

Very good, see some tiny stuff can make result. I hope others that have issue can check, with what you did on this thread, the majority seen positive impact.

I got this too after the update. During the flight the free RAM decreases. 32gb is enough for 2 hours and 15 minutes of flight. Then CtD.

I’m getting the same. Did well most of the day, then framerates started dropping again as soon as I got withing 20 or 30 miles of KBWI (Baltimore). Here is a screenshot with the FPS Counter up. The game crashed to desktop about a minute later.

One thing I noticed (also prior to the patch, when I had the same issue appear on approach to KDFW) is that a) the FPS is being marked by “Limited by Mainthread”, and b) my GPUMemory budget is only half of what is available. Normally it’s running at about 90% or so. 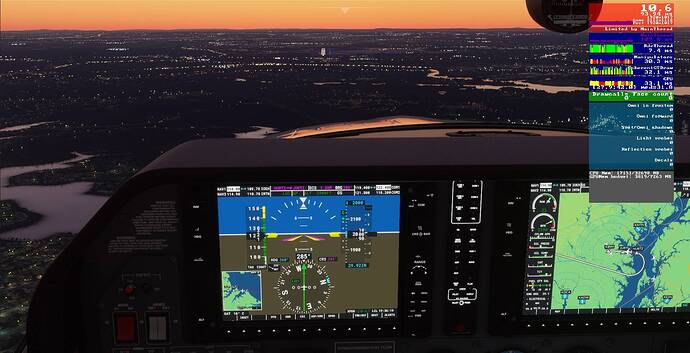 I’m having exactly the same issue you described. I was doing a flight from KJFK and frame rates there were fantastic it was a great improvement to what it was before but the further I got to EGLL the worse the frame rate got eventually i got CTD

Disagree. I am not seeing the behaviour you are describing.

A sample size of one, great! Sorry, you are jumping to conclusions…

I have the same issue, FPS was 30-40 on a longer flight and when i came back to the screen it was just 10 fps and sound stuttering every second. Limited by main thread, CPU usage was normal and GPU usage low.

Hi there, going to close this topic as we have a duplicate which would split votes:
https://forums.flightsimulator.com/t/performance-degradation-with-1-14-5-0-upgrade/376202

If you have cast votes on this topic, re-cast them on the main topic above. The main topic as been brought up by the team and is an on going issue from the update to the patch.