Been doing this for years on other systems. What’s different here?

Have you actually flipped the tuned frequency to the Nav1 active position?

What ILS approaches have you tested this with? ICAO code and frequency used would help a cross check.

Have you actually flipped the tuned frequency to the Nav1 active position?

What ILS approaches have you tested this with? ICAO code and frequency used would help a cross check.

Several airfields in and around London where I regularly fly in the sim with LOC/ILS in other planes.

Nope, it doesn’t tune in or show the ID.

Baffled as to what I am doing wrong.

If you give the ICAO, the runway and frequency you used someone can cross check.

Currently trying to learn the NXi thoroughly, and failing at the first hurdle

I believe it doesn‘t look differently but only differs in functionality: have you turned on the avionics switch?

Maybe they have recently implemented the red crosses then forget the question.

Sure. It’s all livened up. I’m not a beginner. Just can’t fathom the LOC tuning/lock even with the manual in hand.

I feel like I’ve done everything required but to no avail.

The G1000 used to look exactly the same whether the avionics were actually on or off… that’s why I ask… I’m just starting the sim, I’ll have a look

forget it… the sim crashes when I try to load the C172 now… or maybe in this area… I know why I haven’t used this sim since SU7… My way to go is DCS… Sorry but I can’t help.

no problems with EGVN rwy25 ILS app. Freq set as NAV1 to Active and all is working ok. Make screenshot pls where we can see your PFD what you have set there. 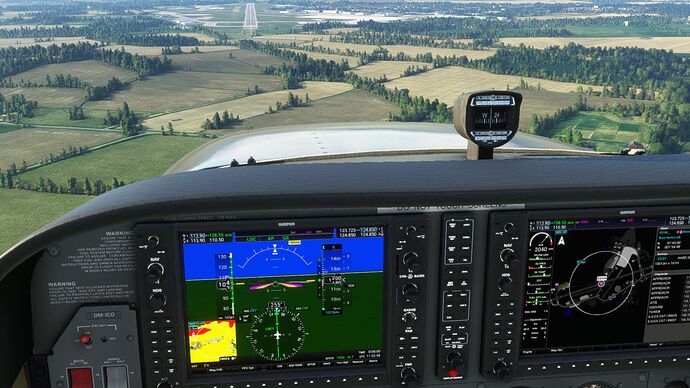 What can I say only, I have Navigraph NAV data so maybe as other users reported, some corrupted data can be presented with default sim NAV DB but this need confirm some one else with also default NAV DB that is maybe problem with data of this airport.

Nope, it doesn’t tune in or show the ID.

I notice that the WT G1000 NXI requires that the ILS identifier be present before the APR button will show pending LOC and GS in white in the PFD annunciator. This happens to me when I am too far off-axis or distant from the LOC runway. As soon as I see the ILS identifier in the PFD the pending LOC and GS appear in white when I click APR and later the ILS performs as I expected as I continue the approach.

One example is KAPC to KSTS ILS 32 approach via the SGD transition. Because SGD is 32 miles distant and at least 10 miles off-axis, while I activate the approach as soon as I am a mile or so from KAPC on a runway 24 departure, the ILS identifier does not appear until I am a few miles past the turn at SGD on my way to the LUSEE waypoint turn to final bearing in the approach.

So while I will save time by lowering the target altitude to the lowest altitude in the approach plan and by clicking VNV to get VPATH in the annunciator, I do not click APR until I see the ILS identifier in the PFD.

EGLJ doesn’t seem to have any ILS. I haven’t installed Navigraph charts yet since I built my new PC but I’m currently doing circles above this airfield and there doesn’t seem to be anything like that available.

all what you need have on second right MFD where you can list airport and it’s data, also with runways and freq. Navigraph is really helpful to serious simmers where also access to charts is included if you want. Yes, I was step directly to EGVN as seen no ILS freq at EGLJ.

Jup I haven’t looked at the G1000 and its development for a while now, it seems they have progressed significantly. I’m playing around with it ATM, pretty nice what WT have done here. The only problem is that the MSFS database is incomplete at some airports while Navigraph usually isn’t. So when a stock MSFS airport doesn’t have a certain feature it doesn’t mean that there isn’t an ILS etc in reality, that’s why I mentioned navigraph.

Let me not agree,

bug can step to anything. Only real data from local countries (AIPs, look at our Slovak or Czech sites as best examples) is probably best, also Navigraph do this job very good in my opinion, no doubts also NAVBlue but what is between MS?Asobo and NAVBlue and how data are transferred to sim, we can only guess.

What a brilliant job that WT products, are for free and are my now default equipments!

EGLJ has no ILS so that’s an easy one.
EGVN Brize Norton rwy 25 with a freq of 108.55 works as expected. Id next to active frequency will be IBZB.

As someone else replied, a screen shot showing your PFD might help.

Thanks to everyone for all this feedback.

I will have a good read and do more tests later today.

BTW I have Navigraph data too - and it’s up to date.

More later… Gotta do other stuff for a few hours now.

All addons that are not labeled Asobo, goes in #third-party-addon-discussion

I found that I had to activate an approach procedure and then it would allow me activate the APR button.

EGLJ has no ILS so that’s an easy one.

I believe it does with Navigraph data in sim. But no matter. There are lots of other ones which didn’t work either, in cluding RAF Mildenhall, which has ILS in basic sim and Navigraph.