So I noticed an update to the YSSY scenery today. After I completed the upgrade, this happens at Sydney. Anyone seen this before? 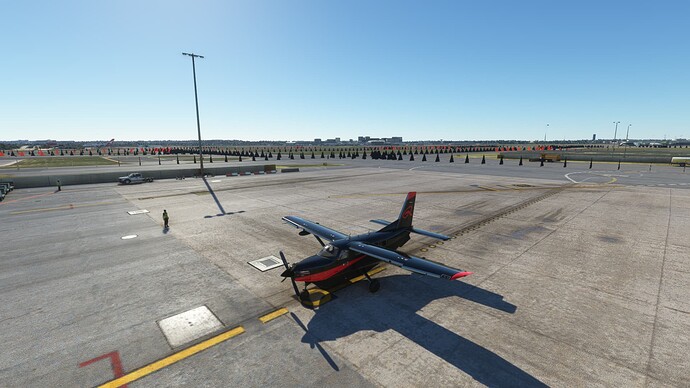 The issue should solve itself if you uninstall the default YSSY scenery.

I have the exact same issue. I have searched and removed the default scenery in the content manager. Reset the rolling cache, stopped and restarted the sim but still get the same result.

This is actually a Fly Tampa product, sold through Orbyx.
There are several posts in Fly Tampa’s forum and they recommend what I’ve already suggested, plus ensure photogrammetry and Bing Data are on.
Also the scenery will do this if run in offline mode.
If that doesn’t do it, the only thing else they recommend is uninstall, delete the folder and re-install.
That’s it from them.
You could also add another post to Fly Tampa’s forum if this doesn’t work!

I wasn’t able to find anything on Flytampa’s forum about it, but Orbx have told me they’re aware of the issue. I have had the default airport uninstalled since I purchased the product ages ago. It was working well even after the Australia update, but when the airport was updated yesterday is when the issue occurred. Will try deleting the folder and see what happens.

Yeah, I’ve been on their forum but I haven’t seen any posts about it. It could be staring me right in the face though, I havent been up long!

Click on the link. Takes you right to the page.
More coffee!!

I’m attempting to reinstall. The only posts I can find on that forum are fairly old.

Edit: A fix has been put out through orbx central so it’s all sorted now.

That didn’t take long to come out!

I have several Australian sceneries Perth Uluru a few others. I notice areas where Orbix World update and the 3rd party airports ground textures change in color.(Usually where the 3rd party defined areas and the world update areas meet. It doesnt bother me because I know the australian creators are working together to resolve these issues.

Yeah I don’t mind the texture colour changes, but as you can see in the pic above I had large triangles covering the whole airport. It’s been sorted now though.

FYI: If you purchase YSSY via Simmarket and installed it via FlyTampa’s universal installer - it is still the unfixed version (with triangles). In the flytampa forum they say it is the fixed version, but it isn’t yet.